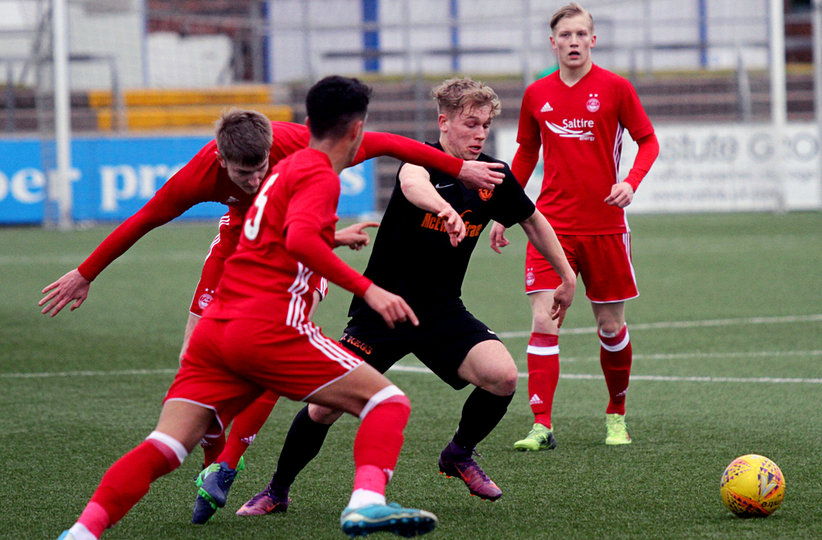 A very young United side found it hard going against a more experienced Aberdeen side at Station Park, Forfar.

The average of the Tangerines was under 17 ½ and but for some heroics by keeper Josh Donaldson, the Dons’ winning margin would have been greater.

Indeed, he was called into action after two minutes forcing an Ethan Ross shot round the post.

However, from the resulting corner, Seb Ross returned the ball into the box and Sam Roscoe’s powerful header found the right-hand corner of the net.

Midway through the half, Donaldson finger-tipped an angled Ethan Ross drive past the post.

On 28 minutes, an excellent save by Donaldson again denied Ethan Ross and he did likewise to thwart Joe MacPherson shortly afterwards.

Donaldson’s opposite number, David Craddock, was called into action for the first time with eight minutes of the first period left, tipping Robbie Ward’s crisp strike over.

Aberdeen deservedly doubled their lead on 57 minutes. Seb Ross raced down the right to drill in a cross for his younger brother Ethan to fire home from eight yards.

Only a superb double save by Donaldson prevented a third.

The first was with his feet when David Dangana was through one on one and he then held a follow up effort from Chris Antoniazzi.

And just before the final whistle, Donaldson was again in action palming away Toby Wells’s free-kick at his near post.