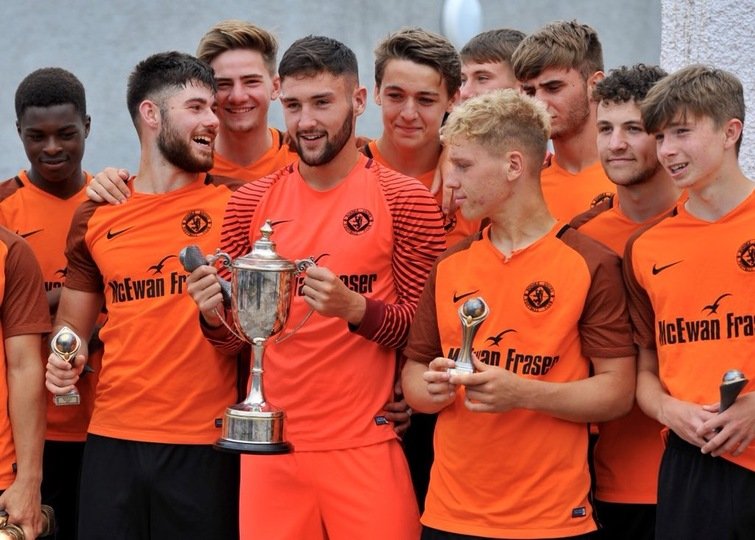 Under the guidance of Craig Easton and Scott Robertson, a youthful United side put on four polished performances to win the D&K Lafferty Cup in Oban on Saturday 7th July.

United continued the tradition of participating in the annual Oban Saints pre-season tournament at Mossfield Stadium and Oban Lorne Rugby Club. This was the 25th anniversary of the tournament which United had won on three previous occasions. The format remained unchanged with the teams playing each other once, in matches lasting forty minutes. This year the competition included Hamilton Accies, St Johnstone, St Anthony’s and hosts Oban Saints.

Unlike previous years, the normally pristine pitches were yellowed and hard following the long spell of warm weather. This along with the heat on the day, made for tough conditions for Easton’s squad.

United got off to a solid start in the Oban Tournament with a win over holders, Hamilton Accies. Two first half goals were enough to secure victory against a youthful Accies side. Jordan Critchley opened the scoring with a low drive from a central position, which evaded the advancing ‘keeper. Soon after the opener, it was winger Allasan Jones who doubled United’s advantage. He did well to rise above his marker and head home a deep cross from Louis Appere. United controlled the game from start to finish. So much so that ‘keeper Josh Donaldson was only forced to make one save, deflecting a shot over the bar with his leg after a Hamilton forward found himself clean through on goal.

In a robust match with the hosts, United took a first half lead when another of their trialists knocked the ball home following a goal mouth scramble. Despite claims the Oban ‘keeper was fouled in the build up, the goal stood. In the second half, a fantastic long range, angled drive from the Jordan Critchley was enough to secure a second consecutive two goal victory.

A fantastic performance by captain for the day, Josh Donaldson, who pulled of three fantastic saves to ensure another clean sheet in this one. In the end it was a fumble from his opposite number that decided the match. The St Johnstone ‘keeper allowed a looping Scott Reekie header to sneak into the back of the net. The central defender’s first half goal was the decisive one in this much which effectively won the tournament for United based on scores elsewhere.

In the knowledge that they had already won the D&K Lafferty Cup, United were in a more relaxed mode against debut boys St Anthony's. The junior team stepped in at very short notice to fill the void left by the withdrawal of regular visitors Alloa Athletic. Scott Banks done the damage in this one when he struck the deciding goal in the second half.

After all 20 games in the tournament were concluded, skipper Josh Donaldson went up to lift the cup for United and bring to an end a fantastic weekend for squad. This was United’s fourth victory in the competition and to put the icing on the cake, their midfield trialist, Jordon Critchley, picked up a well deserved Player of the Tournament award.