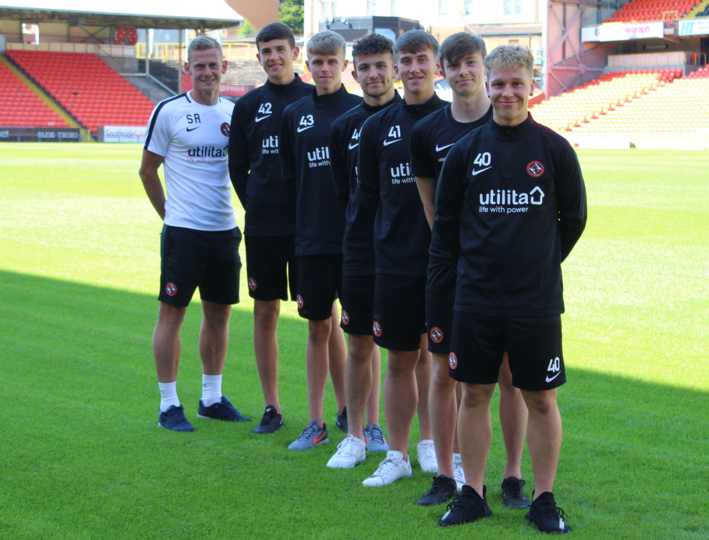 Within Scott Robertson's under-18 squad this season are six youth academy graduates who signed their first professional contract with the Club this summer.

17-year-old Goalkeeper Fraser signed for the Academy in 2011 aged 10 from Stirling Albion Young Reds. Throughout his time playing for the Academy age groups, he has shown consistency and maturity for a young GK. Stirling based Fraser represented Scotland Schools U18s last season in their Centenary Shield games.

Blairgowrie based Ross was signed from local Boys Club Dundee West in 2012 at the age of 11 and has progressed well throughout his time with the Academy. The 6ft 3 left-sided defenders was initially an attacking midfielder, but in the transition to 11-aside, he became a reliable Centre Back who is not only aggressive but can also play out from the back with proper distribution. A very consistent performer for our U17s last season and those performances have allowed him the opportunity to progress at Dundee United FC in a full-time environment. Ross attended the SFA Performance Programme at St Johns HS in Dundee.

16-year-old Nathan is the youngest out of the recent intake of young players. He joined the Academy in 2013, aged 11 from local boys club Dundee United SC. Another aggressive Centre Back who has good recovery pace and likes to start play from playing out from the back through the midfield. Nathan struck up a good relationship with fellow Centre Back, Ross, and performed well for the U17s last season. Another player who has graduated from the SFA Performance programme based at St Johns HS in Dundee.

Local boy Michael is a versatile player who can perform in various positions to an excellent standard. Michael started off with us in 2013 as a Centre Back at the age of 12 but has also played at Right Back and Centre Midfield in recent seasons and acquitted himself very well. Signed from local boys club Ferry Athletic, Michael has progressed significantly enough to gain a full-time contract and was also a pupil at St Johns HS within the SFA Performance Programme.

Attacking midfielder Scott was signed in 2013 from Linlithgow Rose BC and has progressed very steadily throughout his time with the Academy. There have been tough times with injuries and growth related impairments that halted his development at times, but he has shown great character and resilience to bounce back from these setbacks and earn himself a full-time contract. Top goal scorer for the U17s, he also attended the SFA Performance Programme at Graeme HS in Falkirk.

17-year old Robert came to our attention a little bit later than the rest of the players mentioned above, he was spotted playing for Lewis United in Aberdeen only last year, and after a successful trial period, he has shown a great attitude and commitment to earn himself the opportunity to progress in the full-time environment.
Robert who hails from Insch, north of Aberdeen is a hard working, no nonsense Centre Forward who likes nothing better than to upset defenders and give them a very tough time, he has also shown that he can finish when given the opportunity.

Dundee United welcomes each of the young players to Tannadice.