A new crop of aspiring Academy graduates put pen to paper on professional contracts this week.

Thirteen young stars were at Tannadice to secure their immediate future at the Club.

Academy Director Andy Goldie said, “I am delighted to reward thirteen of our Academy players with the platform to fulfil their potential in our high-performance programme at St Andrews.

"Personally, I have been very impressed with how these boys have adapted and responded to the demands we have placed upon them since taking over as Academy Director and I am genuinely excited about what they can achieve individually as well as collectively.

"The number of professional contracts we have offered highlights this but also demonstrates that Dundee United is definitely a Club that truly invests in young players. Tony Asghar, Robbie Neilson and the first-team staff will not be reluctant in giving any of these boys their opportunity - but it’s important they realise they have to work hard and earn it.

"I have told all the boys this is only the beginning, the next objective is for them to break into the first-team, as Logan Chalmers and Chris Mochrie have this year. The pathway is here for them to achieve that if they work hard enough to earn it and I’m confident it won’t be too long before our fans see these boys breakthrough.”

Layton previously played for Broughty United before signing for United aged ten. He is the youngest of our players signing a full-time contract after an impressive 2019 where he has become the first choice right back despite being three years younger than the majority of the opposition. Layton attends Braeview High School in Dundee. He is a very athletic, aggressive right back with strong technical ability in both his build up and more advanced attacking play.

Shaun began at Dunipace Juniors before signing for Forth Valley Football Academy where he spent 3.5 years before signing for United aged 14. He is currently in the Scottish FA Performance School Programme at Graeme High School where he will graduate at the end of the school term and recently made his International Youth debut for Scotland U16s in an international challenge match vs Australia. Shaun is a very intelligent player who can play in several positions, technically very strong with particular qualities moving with the ball.

Rhys started his football journey at Craigpark Colts in Airdrie before signing for Rangers FC Academy where he spent eight years. He recently joined United in February and will graduate from the Scottish FA Performance School at Braidhurst High School this summer. Rhys is an industrious, tenacious midfielder who prides himself in breaking up play in front of his back four and building our counter attacks from deeper areas of the pitch.

Flynn started at Logie Harp before signing at Dundee United aged nine. Flynn is currently in the SFA Performance School at St Johns High School and was recently part of the St Johns side that won the Tannadice Cup where he scored in a 4-0 win. Flynn has an extensive background in futsal, playing for Dundee Celtic and was recently invited to the Scotland Men’s Team trials at just 15 years old. Flynn is a very disciplined, defensively strong left back with an excellent work rate and desire to improve.

Kai started at Dundee United BC before entering the Falkirk Academy and subsequently Forth Valley Academy eventually signing for United Academy aged fourteen. He recently represented Scotland in an international challenge match vs Australia and is enrolled in the Scottish FA Performance School Programme at Graeme High where he will graduate this summer. Kai is a technically strong, creative winger who can also play in the attacking midfield position.

Lewis has been at United for five years joining from Riverside BC, previously being at Monifieth Athletic. He is a graduate of the Scottish FA Performance School at St Johns High School and was part of the squad that won the Senior Scottish Cup at Hampden in April this year. Lewis is a box to box midfielder with fantastic energy particularly in the opposition half where he instigates a lot of our high pressing.

Adam previously played for Hillfoots Community Club before signing for United aged 10. He recently captained Scotland U16 vs Albania in the UEFA Development Tournament and has represented his country at the Victory Shield and against Australia earlier this year. Adam attends Alva Academy. Adam is a modern-day defender who is very confident building our attacking play from defence but also aggressive in his defensive performance as well. 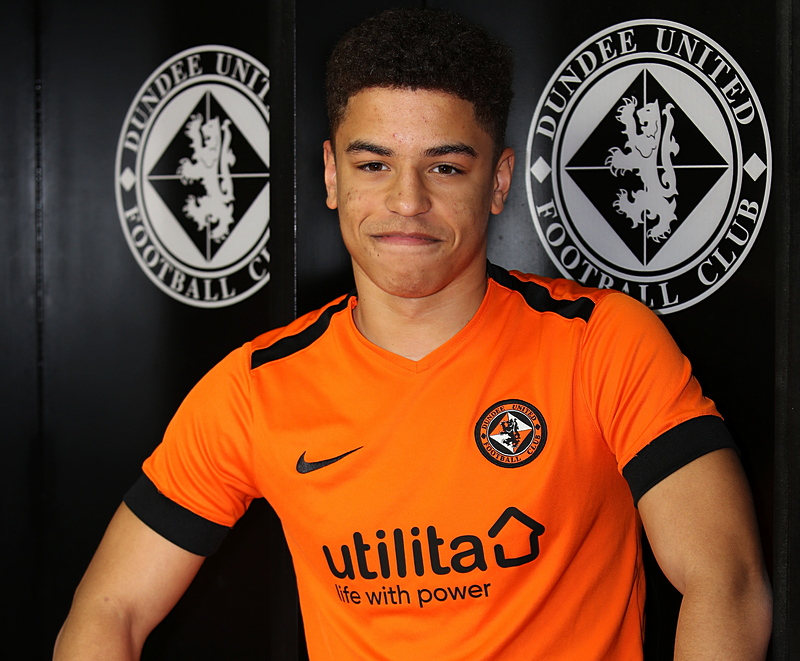 Mackenzie has been training at United since he was seven years old having been identified within our Community Programme. He is a product of Ferry Athletic BC and officially joined the Academy when eligible when he turned 10. Mackenzie attends High School of Dundee. Mackenzie is a very physical, aggressive defender with particular strengths in his 1v1 performance.

Archie started with Kennoway United then AM Soccer and has been involved with Dundee United for ten years. Recently, he represented Scotland Schoolboys playing in the 2019 Centenary Shield this year against our other Home Nations and also scored one and assisted the other two goals in St John’s recent Scottish Cup success at Hampden. Archie is a graduate of the Scottish FA Performance School Programme at St John's. He is an intelligent, creative midfielder who loves to get on the ball in the final third where he can hurt teams with his technical ability.

Chris previously played for Logie Harp BC before signing for United. Chris is currently enrolled in the Scottish FA Performance School Programme and has made multiple appearances for Scotland U16 including in the Victory Shield. He was also part of the victorious St Johns side who won the Scottish Cup this year along with Lewis Neilson and Academy player Jack Wilkie. Chris recently made his first-team debut vs Greenock Morton, becoming the youngest ever first team player for Dundee United at the age of 16 years and 27 days. He is a technically very strong, creative and intelligent midfielder who loves to attack opposition defenders.

Lewis was previously at DUSC before signing for United Academy aged ten years old. He enrolled in the Scottish FA Performance School at St Johns High in 2014 and will graduate this summer. Lewis captained Scotland U16 in an international challenge match vs Australia earlier this year as well as having represented his country on several other occasions. He was also part of the St Johns side who won the Scottish Cup this year as well. Lewis is a technically and physically strong midfielder; he loves to dominate in possession driving through the midfield with the ball and also possesses an excellent goal scoring rate from distance.

Finn was with Ferry Athletic from the age of 6 before training with United in 2010. He signed with United in 2013 and is part of the Scottish FA Performance School at St Johns High, where he will graduate this summer, and has also been selected for National Performance School squads that came up against Manchester United among many other teams. Finn is an intelligent, technically strong midfielder who loves to dictate play from middle to front.

Darren is formerly of Kennoway FC in Fife before joining Fife Elite Football Academy in 2013. He has been at United since 2015 and is part of the Scottish FA Performance School at St Johns High School and recently made his International Youth debut for Scotland U16 in an international challenge match vs Australia. Darren is a speedy, athletic winger who loves to attack in 1v1 situations and punish the space behind opposition defensive lines.