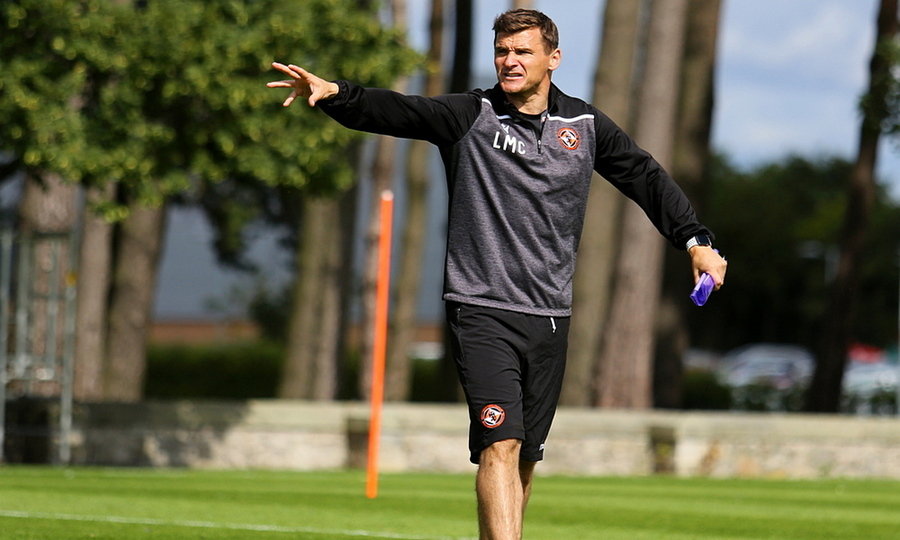 Lee McCulloch says the plan to turn Tannadice into a fortress is coming to fruition as United's 92nd-minute winner against Arbroath kept our 100 per cent home record in the league intact.

Lawrence Shankland's quick-fire double in the dying embers of Saturday's match ensured United maintain a maximum points tally on home soil at the start of this league campaign. And McCulloch says it was all part of the vision for the coming season as we look to carry that run forward when we welcome Morton on Saturday.

United's Assistant Head Coach was still flying high after the late drama of the weekend as he revealed everyone has a spring in their step heading into another tough week of training.

"It was fantastic to eventually come away with the three points," said McCulloch. "I think, potentially, last season we wouldn't have come away with those points, so that is a testament to the boys and the character they are showing. Coming from 1-0 down in the 88th minute to walk away with the win speaks volumes.

"Part of the plan pre-season was to turn Tannadice into a fortress and I think the real start of that was the derby. The fans were phenomenal that night and I think the gates have increased this season compared to last year so that is a credit to the fans to come and support the boys. And the boys have been putting on a show with a 100 per cent record at home in the league and that is just down to the hard work being put in at the High Performance Centre and the culture and environment we are creating.

"The boys are, like most mornings, coming in with smiles on their faces this week. They're ready to work hard and the players and staff are trying to improve every single day. It'll be hard work again as we look forward to a really hard game on Saturday."

While it was Shankland who stole the headlines on Saturday night, the impact of United's substitutes could not be understated. Paul McMullan came on immediately after Liam Donnelly nodded Arbroath in front and was the architect for Shankland's first goal, with Adrián Spörle and academy graduate Logan Chalmers making significant impacts on the left-wing and upfront.

It's that quality in depth that gives United another advantage over our rivals and McCulloch admits it's going to have a significant bearing on the season.

"The most pleasing thing from the weekend is the boys don't know when they're beat,' said United's Assistant Head Coach. 'We had a little hiccup away at Ayr and to bounce back from that showed great character, resilience and desire to go and win games in front of our home fans who were fantastic at the weekend. It's now just about building that momentum.

"Our squad depth is going to be massive for the season ahead. In the coming weeks, we're going to have to use our squad. Spörle and McMullan helped change the game when they came on and Chalmers, who has been coming through the ranks here, came on and was fantastic as well.

"We've got to be looking at the squad as game-changers. It's a squad game and we've certainly got that just now. As the squad is well aware everybody will be needed so if you're not playing don't let your head go down because you can come on and change the game."

This weekend's fixture at Tannadice is sure to be another cracker as the team with the best home form in the league welcomes the team with the worst away form. Morton make the long trip up from Greenock having lost every one of their matches on the road so far this league campaign.

Despite their struggles away from Cappielow, David Hopkin's side should not be underestimated as they sit fourth in the table having already produced some significant results in the league.

"Morton have had a great start to the season. They are a hard team to play as they have shown. They have already beaten Dundee this season and have got some good players, players who can win them games of football,' said McCulloch. “So, we need to be on our game. We need to move the ball quickly and with it being a home game, it's a game that we're looking to take maximum points from. But we're under no illusion about how hard it is going to be.

"I know David Hopkin very well and he will be desperate to win the game. He will have a game plan but it is important we just look at ourselves and not looking over our shoulder or seeing who is next to us. We just need to concentrate on ourselves every day and be going into the matchday with the mindset of being positive and I think we'll do that."