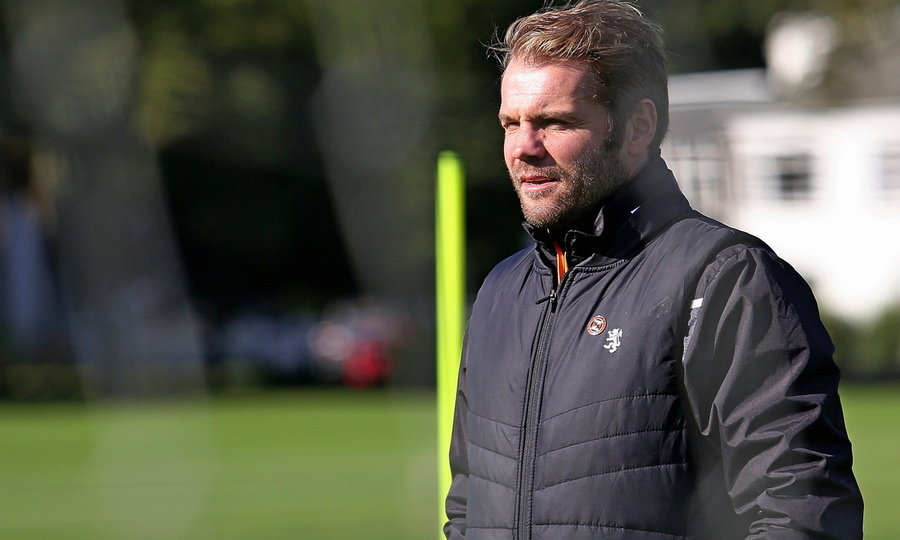 Tannadice has been buzzing this week with the news that our goal-machine, Lawrence Shankland, has received his first call-up to the Scotland senior squad.

It's a huge honour for a player who has been in sparkling form since signing in July, scoring 15 goals in 12 appearances in all competitions.

It was only a matter of time until these stats caught the eye of national team manager Steve Clarke, and now Shankland will have the chance to prove himself as an international quality striker when Scotland take on Russia (October 10) and San Marino (October 13).

Clarke described Lawrence as a "natural finisher" when he announced the squad on Tuesday, sentiments which were echoed by Robbie Neilson.

"I'm delighted for Lawrence. It's great for any player to get that recognition, especially for someone playing in the Scottish Championship," said the United Head Coach. "I think it was a big surprise for Lawrence, even though he has been scoring a lot of goals, people will be looking at it saying it's not the top level, but anyone scoring that number of goals and those types of goals deserves their chance in the national team.

"It wasn't too big of a surprise for me. The way the Scotland campaign has went - it probably looks unlikely that we'll qualify via the group stages - these four games are an opportunity for Steve to look at some players and start gearing up for those qualifiers in May.

"I think it's a great opportunity for Lawrence to go there and, hopefully, show what he is worth. He's definitely a top goalscorer and I think playing with some of the players in the Scotland setup they'll be creating some good chances for him and he's definitely a guy who can put them away."

While this will go down as an individual accolade for Shankland, it's one which reflects greatly on Dundee United Football Club as a whole. It's proof that the hard work done by everybody at the club is already paying off, even at this early stage of the season.

"Lawrence will be the first one to say that he is nothing without his teammates. These are guys who are creating the chances and working hard for him," said Neilson. "It's a pat on the back for everyone at the Club, whether that be players, staff or supporters because everyone is together. It's great for the player and great for the Club as well.

"The reason we chased him in the summer is because we knew he would score goals. We've proven so far that we have a team who will create chances for him, the key now will be keeping him consistent throughout the season. He's had a fantastic start but there is still a long way to go. We hope that this little boost will do him well and he'll come back and be firing again for the rest of the season."

But with all this excitement, it's important to remember we do have a match this weekend away to Alloa Athletic on Friday night in a 7:05 pm kick-off in front of the television cameras.

And while this might be a top-versus-bottom clash, Neilson is fully aware of the challenge which awaits us on the artificial surface at the Indodrill Stadium.

The United Head Coach has warned that this is going to be one of our most demanding matches of the season.

"It's going to be a tough match. Although Alloa are sitting down at the bottom of the league it's still a very difficult venue to go to," said Neilson. "We got beat there last season and Alloa are a team that will pick up the majority of points at home this year because they play and train on the same surface, but we're looking forward to it. It's a Friday night game on the TV and we hope to take another fantastic support with us and get the three points.

"Their style of football is much the same despite the change in manager. They try to play football the right way which comes from the chairman which reciprocates down to the managers. Their squad is also much the same. They've managed to retain most of the players they've had over the last few seasons - they've got that continuity. Although they're a part-time team, they've got the best part-time players in Scotland.

"The Championship is a very competitive league. Everybody on their day can beat anybody else so, we have to make sure we treat this game exactly as we would if we were gearing up for a derby. We must get the three points and then whatever will be on Saturday will be. But if we get the three points it will be interesting to see how the other teams handle it."

Cash gates will be in effect on Friday night and we would recommend fans arrive with plenty of time to avoid delays.