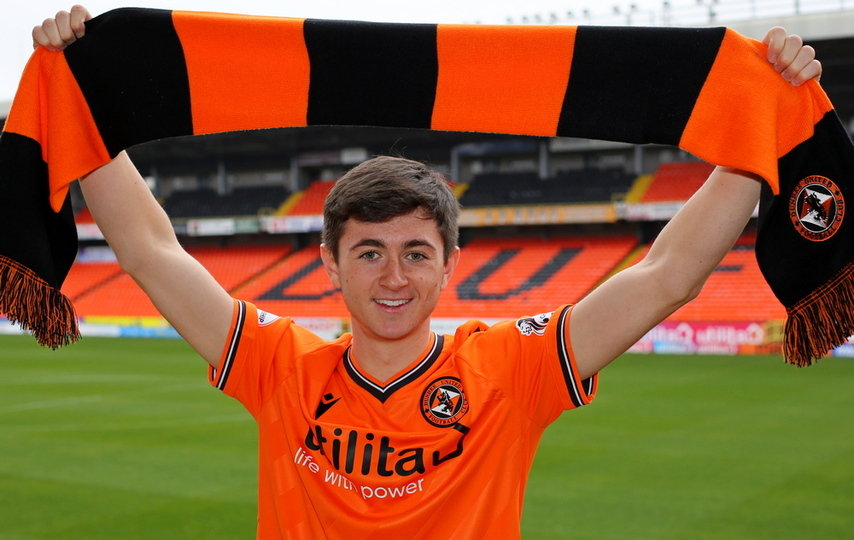 Dundee United Football Club is delighted to announce that Academy Graduate Declan Glass has signed a contract extension until the end of season 2022.

Joining United's Academy from Hutchinson Vale in 2014, Declan was immediately viewed as a promising youngster and in 2017 signed his first professional contract with the Club. He would go on to make his first-team debut that same year when he came on as a substitute against Dumbarton in a 2-0 victory for United.

Declan went on to make his full debut when he was named in the starting eleven against Arbroath in the group stages of the 2018/19 Betfred Cup and netted his first United goal in the same campaign away to Elgin City.

Later that season, Declan went out on loan for the first time to Airdrieonians where he made 13 appearances and scored one goal.

Following a successful pre-season with United this summer Declan joined Cove Rangers on loan until January 2020 where he has hit the ground running. His five goals in 15 appearances have helped fire Cove to the top of League Two, whilst Delcan has also scooped up individual accolades as he was named League Two's Player of the Month for August.

Declan joins Louis Appéré and Logan Chalmers as the latest young talent to commit his future to Dundee United.

Sporting Director Tony Asghar said: "It is a fantastic achievement for the Club to secure another one of our talented young players on a longer-term contract. Declan is the latest of our Academy players who we see as capable of breaking into the first team. It's further evidence of the sustainability we're looking to achieve as a team and as a Club."

Declan said: "I'm overwhelmed and delighted to get it done. We've been talking about it for a wee while now but I'm just delighted to get it over the line. The Academy was brilliant for me and I've made a natural progression towards the first team. I can't thank everybody enough."

Brian Grant, Head of Player Pathway and Loans, added: "I'm just delighted that Declan has committed his immediate future to Dundee United. His progression over the last few years has been remarkable and, hopefully, he can continue that moving forward. He had great success on loan at Airdrie last season and now this year with Cove Rangers. He has contributed to their charge up the table with numerous goals and assists. Hopefully, he can continue that form and return to Dundee United in January to have an impact on Robbie's plans and the first team."