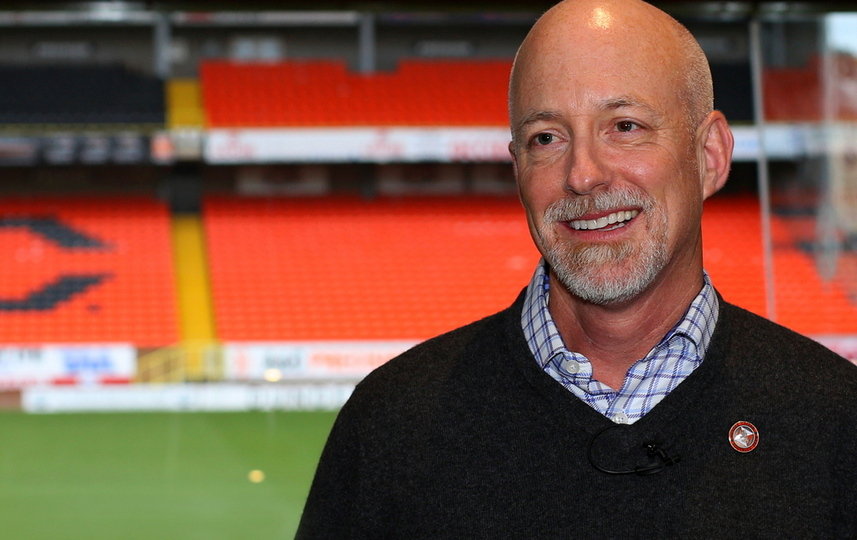 This week Dundee United were pleased to welcome Chairman Mark Ogren for his most recent visit.

The Chairman was in attendance for both of United's matches at Tannadice this week and watched proudly as the team took maximum points against Dunfermline and Partick Thistle without conceding a goal. Those results maintained our 100 per cent league record at home this season whilst also creating a three point gap at the top of the Ladbrokes Championship.

It leaves him heading back to Minnesota, with a smile on his face. Before departing, he sat down to discuss the season so far.

"We've got an internal point and goal target that we've achieved through the first quarter. So, we are pleased to be sitting top of the table and clear by three points," said the Chairman. "The dream was that we got promoted last season so we have made those adjustments and it's definitely the goal this year to be promoted.

"Making the play-offs last season was absolutely the driving force coming into this season throughout the summer. We've been in the play-offs the last three years and it's a tough path to take. So, our goal is just to win the league outright this year."

With such a successful start to the league campaign it was no surprise to see the Club sign Head Coach Robbie Neilson and his assistants Gordon Forrest and Lee McCulloch on extended contracts until 2022 earlier this month.

It was a decision the Chairman gave his full backing as he was delighted to see the long-term vision of the Club coming into effect.

"It is great to see the Club's longevity with Robbie's contract extension. When you feel you've got the right person at the helm you want to secure him. That means a lot because we've got a long-term vision on everything that we do around here., whether it is stadium improvements or a new ticketing system or taking retail back inside. We're investing for the long-term future of this Club and we need stability at all levels, both on the football side and the business side.

"We had been talking about extending the coaching staff contracts for a while because it means a lot. We're trying to attract good young players into the Academy and trying to retain players. It's important, and a good message, for current and future players that we've got some stability there.

"Robbie is a very talented coach. He knows what he is doing and he has been successful in his career. Before every match he sends me a match preparation so we see what he perceives as the strengths and weaknesses of the other team and what we're going to do to counterbalance that and exploit other teams. He gave a presentation to the board the other day with all these metrics and analytics. There is a lot to that and he does a tremendous job."

One of the highlights for the Chairman during his visit was the news that Dundee United's Academy had secured 'Elite' status within the Club Academy Scotland structure. It was a significant milestone for the Club in the first year under the Chairman's ownership.

"This is absolutely a team that is looking for future success. We just got Elite status on the Academy which is crucial. We're attracting very young talent and helping to develop them to either go into our first team or potential sell on in the future. That is a good thing from the revenue side for the Club and for the success of the football team. The plan was to get Elite status quickly but it was an incredible job by Andy Goldie and his team and we're very pleased with where we are with that.

"It is important that we can show these young people they have got a chance to play for the first team because it's key to their development. We're all on the same page and have the best interest of the particular players in mind. We're trying to develop players - it helps us and it helps them. When you take a look at everything we've got, the facilities, the coaching staff, we've got the full package."

The Chairman then went on to express his delight at the increased attendances Tannadice has enjoyed during the current campaign.

"It's incredible to see the amount of fans who are turning up this season. The fans have been coming out and our season ticket numbers are up - it makes such a big difference.

"I know sometimes the fans can be disappointed when we don't win all our games. We go into matches and expect to win but we don't, and there are going to be times when we just don't bring our best game. Winning when you don't play your best is the sign of a champion. Good teams find a way to win and we have been doing that most weeks.

"We just can't get too high when we have a good match and we can't get too low when we don't. It's a long season and we just have to remain focused on what the goal is and that is to be promoted."

Finally, the Chairman took time to look to the Club's future with the priority ultimately being promotion to the top flight at the end of this season.

"I feel like we are a Premiership club which is stuck in the Championship right now. We lost an incredible amount of money last year but if you really take a look at that, we didn't hit the revenue numbers that we had, but we were on somebody else's budget, that wasn't our budget we were only here for half of that particular year. But we've also spent a lot of money on things mentioned earlier that are going to help us long-term, and obviously that is an expense but we're a big club.

"We're one of the biggest clubs in Scotland so we can't get too worried about the amount of money that we are losing with the structure of the Club that we have - we could save a lot of money by reducing the size of the Club, but we don't plan to stay in the Championship.

"When we get promoted we want to hit the ground running and have all these things established so we are in good shape. We have to be structured properly and be ready for when we hit the Premiership and we will be ready. I truly believe that we are the best club in the Championship and we will be promoted. People know who Dundee United are, they know our Club. But that's based on the past history and now we want to make our own history."

A freeview video with the Chairman is available to watch here.