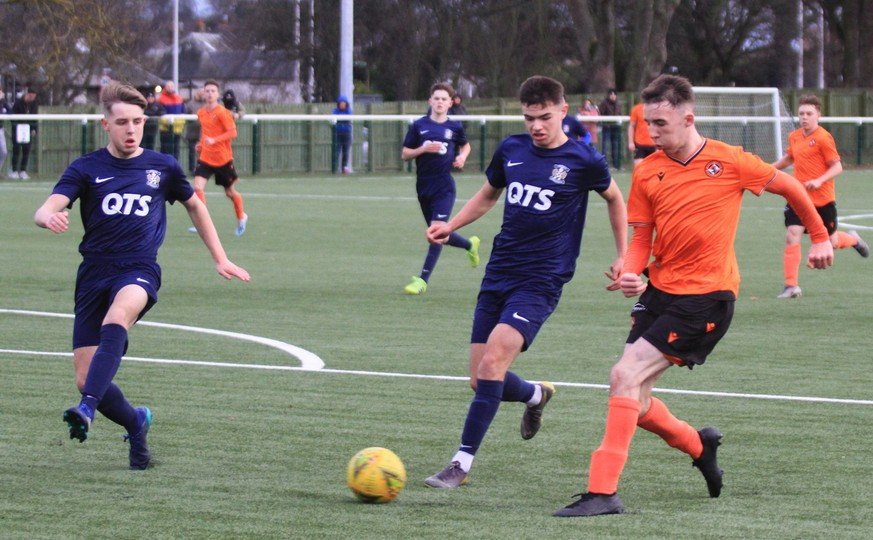 After three weeks without a fixture, the Under-18s were back in action this afternoon when they hosted Kilmarnock at Whitton Park, and while the return to competitive football had them buzzing early in the first half, the visitor's age and experience was ultimately the deciding factor as they snatched a 2-1 victory late on.

United enjoyed the majority of possession in the opening 45 minutes and it was Flynn Duffy who was pulling the strings for the Young Terrors at left-back.

He was involved after eight minutes when he picked out Fin Malcolm with a deep cross. It looked like it might have avoided the 15-year-old but he produced a wonderful first touch to bring the ball down in the middle of the box. He turned to get his shot away but the keeper managed to tip the ball wide with a fingertip save.

Duffy was involved again in the 27th minute when he played an excellent ball down the left wing to release Shaun Brown behind the Kilmarnock backline. He then played the ball off for Archie Meekison on the edge of the box, but the Academy Player of the Month for October pulled his shot inches wide of the far post.

In the 36th minute, the ball broke on the edge of Kilmarnock's box where Duffy was waiting to sweep it up. He slipped the ball back into the box for Meekison but he curled the ball just wide of the top corner.

Two minutes later, however, the Young Terrors did take the lead with Duffy again involved. The 16-year-old's initial free-kick cannoned off the wall but rather than let the ball roll out for a corner he kept it in play. It proved to be the right call as his cross was turned home at the near post by Malcolm. It was a great moment for the young striker who has just made his way back to full fitness after seven months out with injury.

Head Professional Performance Coach Adam Asghar said: "I'm absolutely delighted for Fin, it's a massive positive for him. At 15-years-old to handle being out injured for that amount of time is so tough. He was our first choice striker when we came in and to have him back is a massive plus. He's a traditional number nine who basis himself on how he scores so to get a goal will do his confidence a world of good."

That deserving lead didn't last long, however, as Kilmarnock responded inside two minutes. It was an impressive finish from Keir Russell who produced a well-struck volley into the top corner after a cross from the left-wing.

Both sides came out fighting in the second half to try and assert themselves in front. United went close in the 55th minute when Lewis Neilson dribbled his way into the box and pulled the trigger from a tight angle, but it rolled wide before Meekison could tap it home.

Kilmarnock then went close on the hour mark when Tarek Abed whipped a cross into the six-yard box, but Josh Rennie struck his volley high over the bar from close range.

In the 73rd minute, Darren Watson capitalised on a mix-up between two Kilmarnock defenders and chipped a cross to Neilson on the penalty spot, but his overhead kick was held by the keeper.

Two minutes later, Neilson's mazy run saw him ease past the challenges of the Kilmarnock defence before laying the ball off for Duffy to have a pop at goal but it flew wide of the far post.

But with ten minutes remaining it was Kilmarnock who snatched the lead. Another cross in from the left-wing caused a scramble at the near post and Russell got the final touch to knock it over the line.

The Young Terrors threw everything at it to claim at least a point but Kilmarnock held their nerve to secure the win.

"I thought first half the boys did very well," said Asghar after the full-time whistle. "A lot of control, a lot of good play and intensity. We moved the ball well and created a good few chances but we've got to start putting them away. We've got to be ruthless in both boxes to start getting the results.

"Fin scores a great goal but straight away the boy goes up and scores a wonder strike. We've just got to learn to manage it a little bit better in the first half. We've got to expect that, it's development football. The boys are only going to get better by making those mistakes. So that is our role to develop them.

"Fin is a 2004 player, as is Kerr Smith, as is Dominic Naglik, Criag Moore is a 2005. They were playing against a team of 2002s. That's the experience the boys need to go and handle first team football as early as possible."

Next up for the Young Terrors is the re-arranged Scottish FA Youth Cup tie against St Johnstone at Kelty Hearts next Tuesday (December 17). Kick-off is 2.45pm.