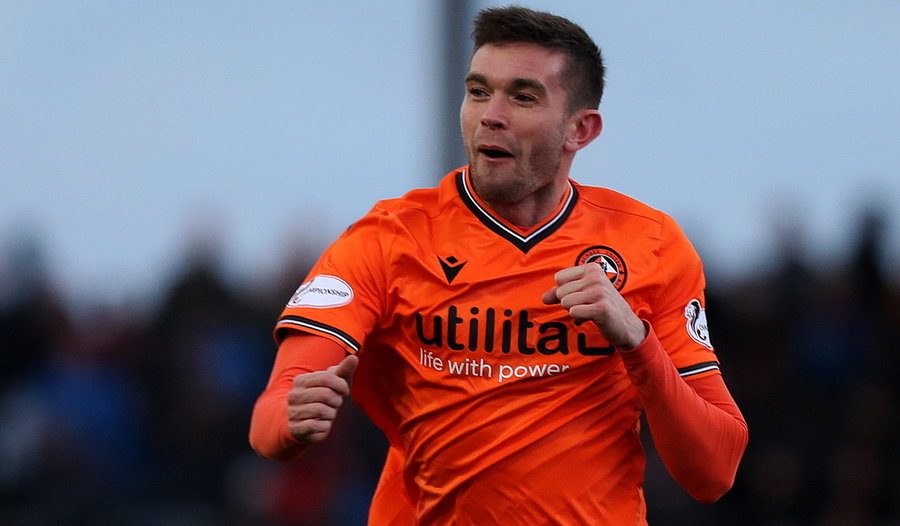 Everyone expected this would a tough assignment and that was exactly how it panned out with United having to battle hard for the three points that made it eight wins on the trot extending their lead at the of the table to 13 points.

As they had done at Morton, United again struck early courtesy of a deflected Sam Stanton goal when playing against the wind.

And with Nicky Clark missing a second half penalty, Arbroath pushed United all the way with Arabs relieved to hear the final whistle.

The eleven that started Tuesday’s game at Morton were given the nod to face another difficult away game. Fit again Paul McMullan was on the bench as was Cammy Smith who replaced Academy Graduates Logan Chalmers and Chris Mochrie.

The only change for the Red Lichties from the side that drew at Ayr United was striker Luke Donnelly replacing David Gold.

United kicked off towards the Arabs behind the goal facing a strong westerly wind which was going to be a major player.

Consequently, the home side made the early running. However, their first foray up the field saw take them lead just six minues in.

Nicky Clark played a free-kick into the edge of the area. The ball bobbled about before breaking back to Sam Stanton whose first-time shot from the edge of the box took a deflection and careered into the bottom left-hand corner.

United forced a couple of corners but then Arbroath enjoyed a good spell of pressure. And on 20 minutes, only a great block by Paul Watson prevented Luke Donnelly scoring. 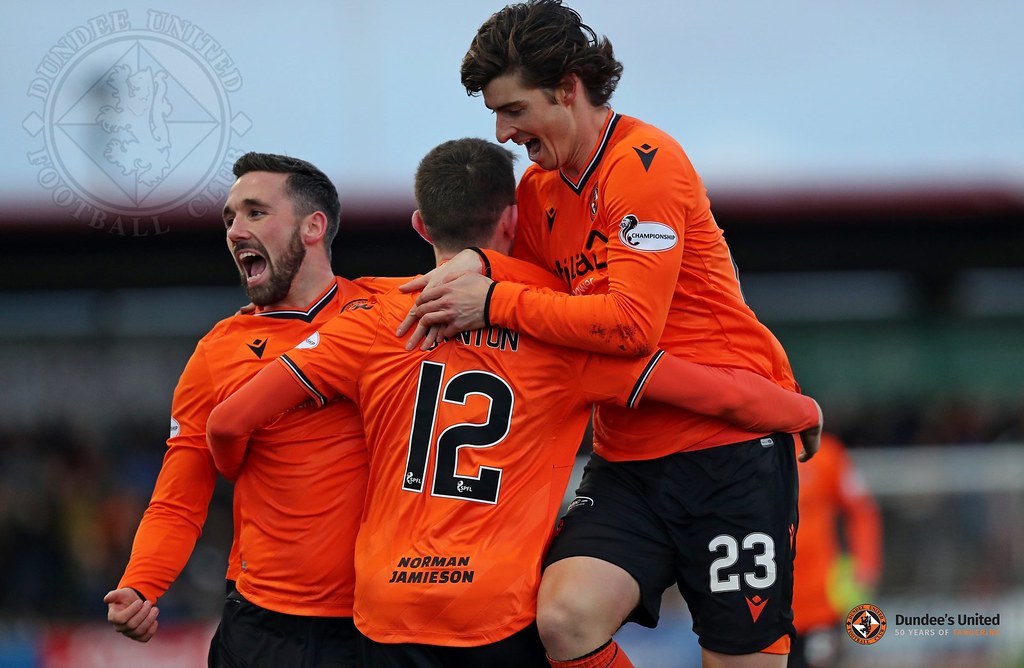 Another Linn free-kick aided by the elements again spelt danger in 27 minutes. This time it was from some 40 yards which Siegrist could only parry out and, with Hamilton on the end of the rebound, an equaliser seemed inevitable, only for the defender to have a fresh air shot!

Then Scott Stewart powered in a header which fortunately was straight at Siegrist.

Having survived a spell of sustained Arbroath pressure, United retorted with a couple of decent attempts.

On 35 minutes, an Appéré effort reared up off the pitch, but keeper Derek Gaston still held it.

And a minute later Gaston could only watch as Lawrence Shankland's pile-driver from 25 yards zipped inches over.

Seven minutes from the interval Omar Kader was booked for late tackle on Ian Harkes.

A minute from the interval a Scott Mckenna shot was blocked and Linn, fortunately, fired wildly past.

So, a hard fought half finished with United still with their noses in front and with the wind at their backs in the second half.

The first effort of the second period was from Luke Donnelly but it was high and wide.

With three minutes gone, Shankand tried his luck with the wind; his effort from 40 yard, however, was held by the keeper.

Ten minutes into the half, United squandered a golden opportunity.

Clark chased on to a through ball, prodded it past Gaston who brought him down for a  penalty, earning him a booking.

However, the goalie went from sinner to saint by saving Clark’s spot-kick, diving to his left and palming it away.

The first change of the game was McMullan for Stanton after 64 minutes and he immediately went on a run and got to the bye-line but his cut-back was blocked by a defender and cleared.

Midway through the half, Arbroath again threatened with a header from a corner clipping the bar.

With 74 minutes gone, Virtanen was booked in this compelling contest.

Despite having the elements against them, the home side were striving for an equaliser and almost got it when Linn lashed a low cross right across the face of the goal, but there were no takers.

Although Dick Campbell brought on three substitutes in the closing ten minutes, the Tangerines held on for victory to the delight of the large away support.

Man of the Match: Calum Butcher was an absolute colossus in the middle of the park.