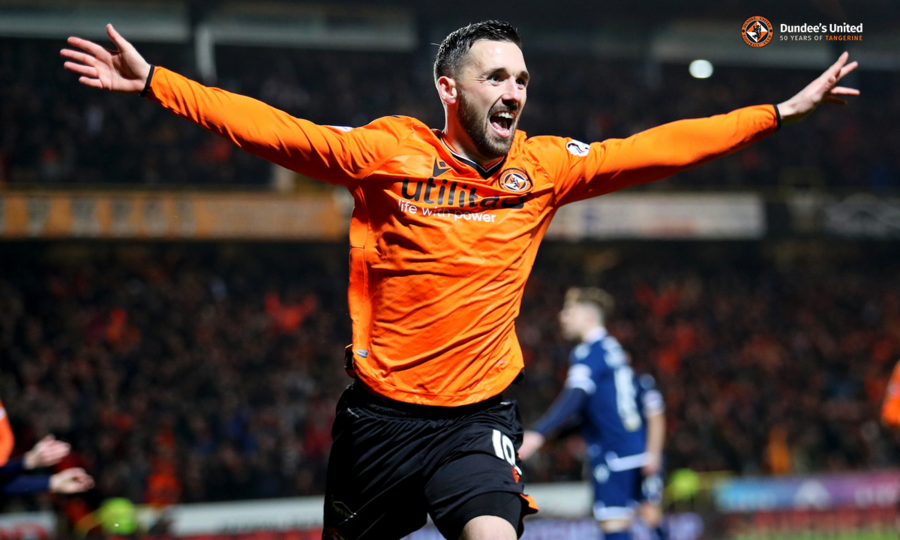 For the first time this season, United failed to win a home game as a typically tense Derby finished in stalemate.

However, there was the consolation of maintaining the 17-point advantage over our neighbours as well as extending the lead at  the top to 14 points.

A flowing move after five minutes was superbly converted by Nicky Clark to break the deadlock.

However, Dundee hit back early in the second half to level through Dorrans.

Thereafter, both side had chances to win, but a share of the spoils was probably a fair summary of procedings.

There was just one change in the starting eleven, Louis Appéré coming in for Sam Stanton who dropped out completely. Also out of the squad was the soon-to-depart Troy Brown with Academy Graduates Logan Chalmers and Chris Mochrie promoted to the bench. Dundee fielded the same side that won at Partick the previous Saturday and were looking for a third straight win.

In the highly charged atmosphere generated by the capacity crowd, Dundee kicked off towards the Eddie Thompson stand.

After a cagey opening, in the first attack of note in the fifth minute, United took the lead. Ian Harkes gained possession in the centre circle and played the ball out wide to Appéré who slipped the ball into the path of the over-lapping Jamie Robson whose low cross was flicked home by Nicky Clark from six yards.

It was the striker’s fifth goal in the last seven games.

A clash involving Jamie Robson and Paul McGowan earned both a talking-to by the ref after ten minutes as the tension mounted.

Some 16 minutes elapsed before Dundee had their first attempt on goal, a McGowan effort on the turn being blocked for a corner which came to nothing.

Midway through the opening period, Dundee came close to levelling. Finlay Robertson’s lofted pass found McGowan in space but Benji Siegrist blocked his shot and collected the rebound as the ball ran loose.

United reacted by winning a couple of quickfire corners, though the second one was cleared all too easily.

Indeed, it had developed into a scrappy, stop-start affair though, in one of the few attempts on goal, Lawrence Shankland sent a header from a Robson cross high and wide of the target after 35 minutes.

Just before the interval, Kane Hemmings required treatment for a head knock as Dundee pushed for an equaliser, but without troubling Siegrist.

But it was United who almost grabbed a second in stoppage time, the legs of keeper Jack Hamilton keeping out Harkes’s shot on the turn. 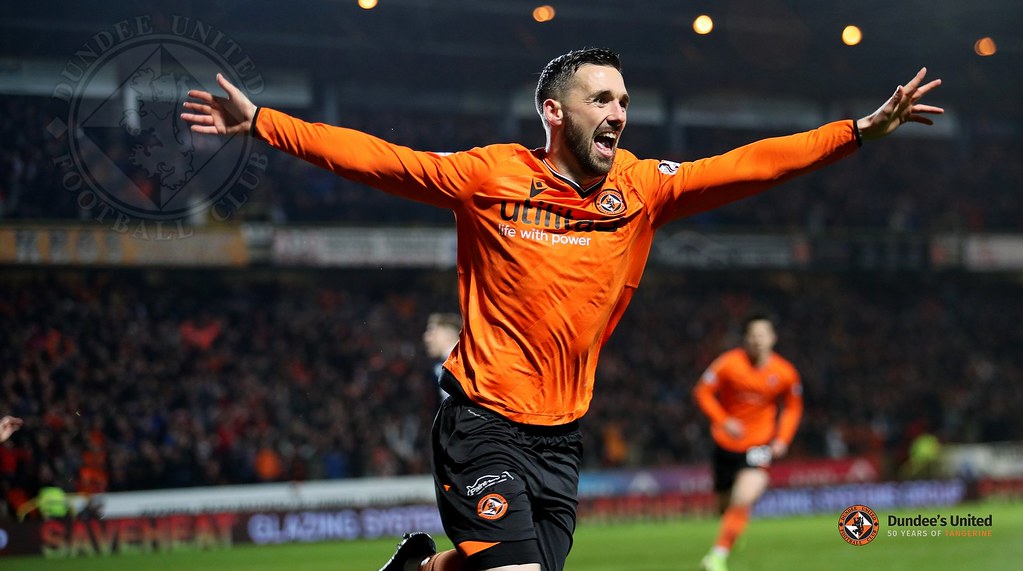 Four minutes into the second half and United were pegged back as they were punished for failing to clear their lines.

A McGowan shot deflected off Liam Smith and fell kindly for Graham Dorrans who drilled home from the edge of the box.

And five minutes later, there was a let-off for the Tangerines. Mackie’s delicate chip fell perfectly for Danny Johnson, but fortunately, he completely miscued his shot.

With the game getting more and more stretched, Dundee made the first substitution with Andy Nelson replacing Johnson just after the hour mark.

Shankland headed a far post cross into the side netting after 65 minutes as United looked to regain the lead.

Dorrans became the second booking of the evening for a late challenge on Liam Smith midway through the second half.

Long range efforts from Clark and Butcher threatened but the first was blocked and the second diverted for a corner as United tried to take a foothold on the game.

Just before the end, Butcher was booked as both side chased a winner in vain.

Man of the Match: Once again Calum Butcher was a rock in midfield.