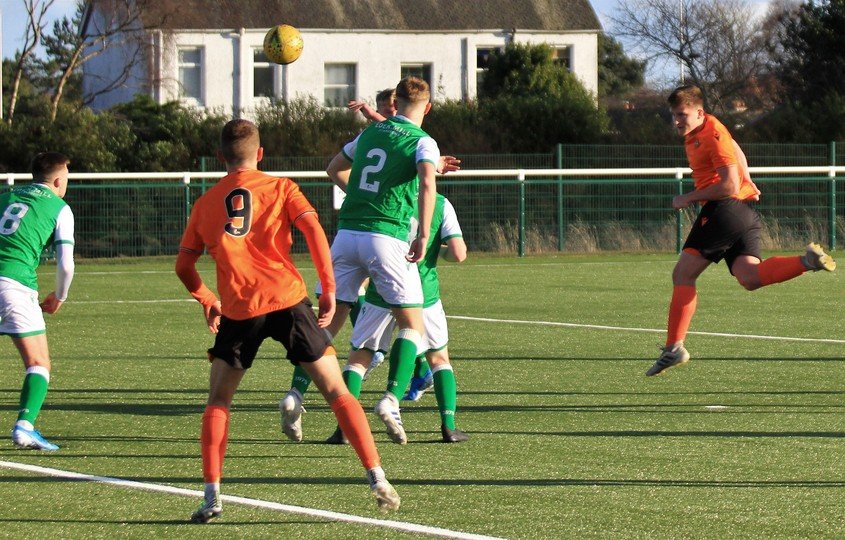 The Reserves were dealt a harsh lesson this afternoon in the SPFL Reserve League Cup as Hibernian walked away 5-2 winners at Whitton Park.

It was a tight match for the first hour, with the game locked in a 2-2 stalemate after goals from Adam Hutchinson and Archie Meekison pulled United back from two goals down to level the tie.

But Hibernian moved up a gear in the final half-hour to ensure the victory was theirs, with Ryan Shanley slotting home a hat-trick.

United began proceedings brightly and were unlucky not to go in front after just seven minutes after Meekison combined with Alassan Jones on the left-wing and fired an excellent delivery to the back post, but Under-18s captain Lewis Fraser couldn't get the contact on the ball which would have surely seen it cross the line.

The game turned into a bit of a scrap after that as both sides tried to stamp their authority on the match, and it was the visitors who struck first in the 20th minute.

From a free-kick, Jayden Fairley picked out Dino Leddie at the back post. His first effort was initially denied by Josh Donaldson, but the ball fell behind United's young keeper and the Hibs man was eventually able to knock it over the line.

It was a quick-fire double for the Hibees as three minutes later they doubled their advantage when Shanley fired home his first of the match with a low finish.

United could have crumbled from such a sucker punch but responded in excellent fashion just two minutes later when Meekison picked out Hutchinson from a corner and the 16-year-old nodded down past the keeper.

The Terrors were unable to get the equaliser before the interval but were finally back on level terms seven minutes after the restart thanks to Meekison.

Fraser put the ball on a plate for his Under-18s teammate with a delicate cross to the far post and the youngster could make no mistake with a headed finish.

United had started the second half with such ferosity that when Josh Campbell nodded Hibs' third past half-time substitute Fraser Currid in the 58th minute, it came as a complete shock.

Currid then did brilliantly to keep the score down in the 66th minute when Shanley looked to add to his account with a low shot but it was met with an excellent save.

United steadied themselves and got their composure back to go hunting for another equaliser. Kai Fotheringham went close after 71 minutes after he fought off the defender to break into the box, but he failed to get the power behind his shot to put the keeper under much trouble.

Then, three minutes later, Meekison went close to a second after Jones had struck the wall with his free-kick. The ball deflected out to the 17-year-old who fired straight down the mouth of the keeper.

But it was another quick-fire double which would secure the win for the Hibees, both coming from Shanley.

His second goal of the afternoon came in the 76th minute after a scramble in the box saw him finish into the bottom corner, before completing his hat-trick 60 seconds later when he was found free in the box.

"I'm left frustrated after that," said Player Transition Coach Dave Bowman. "We've got to work wonders to score goals and the goals we give away are nothing short of disgraceful. It shouldn't happen at a lot lower level than the level they want to play at.

"For the first 15 minutes of the second half we were the better team, we looked like we'd have probably gone on to win the game. We need more leaders, more people who are going to care about everything. I don't think they don't care, but they've got to show us more on the pitch.

"This is their bread and butter now, this is their livelihood and they've got to take responsibility and win games. Sometimes it's not pretty but you've got to try.

"Football is the best thing to be involved in but for every up there are going to be so many downs and it's how you cope with these downs."