RESERVES LOSE OUT TO HEARTS 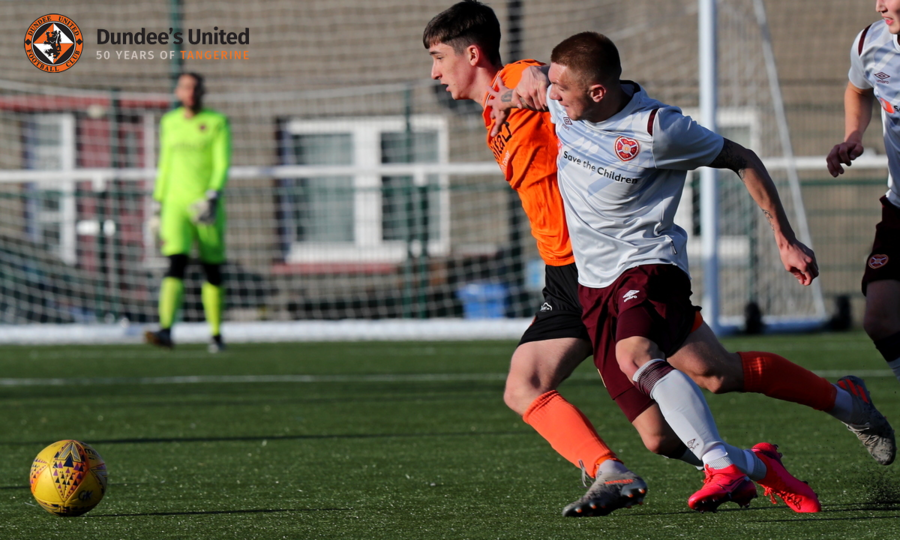 After some tough results over the last couple of weeks, no one could fault the effort of the Reserves who fought bravely to get a result against Hearts in the SPFL Reserve League Cup but lost out in the end to the Edinburgh side 3-0 after goals from Leeroy Makovora and Callumn Morrison.

Results earlier in the competition meant that regardless of the result neither side would be qualifying from the group stage, but it didn't hold the boys back from trying to claim the points.

The young Reserves side started well with the first chance coming after just 60 seconds. Darren Watson was the catalyst as he put the Hearts backline under pressure and forced the ball to Jake Davidson on the penalty spot, but the 19-year-old's shot skimmed across the surface and wide.

The young midfielder went close again five minutes later when he made a brilliant run in-behind the defender and broke through on goal to latch on to the ball. He then lifted the ball over Colin Doyle who had charged out to close down the attack, which worked in his favour as the shot fell to the wrong side of the post for United.

The match slowed down after that point with the next chance not coming until 20 minutes later. Kieran Freeman and Logan Chalmers combined down the right-wing, allowing the full-back to deliver a low cross into the box. The ball eventually fell to the foot of Adam King but his shot was comfortably held by Doyle.

Deniz Mehmet then came to United's rescue in the 35th minute when he produced a stunning save to keep out Connor Smith's free-kick.

But it took an even more remarkable strike from Makovora a minute before half-time to give the visitors the lead. The young striker brought the ball down on his chest before unleashing a powerful strike at the near post which no keeper could have kept out.

It took just five minutes after the restart for Hearts to double their advantage when the referee pointed to the spot after Connor Smith was brought down the box. Morrison stepped up and placed the ball into the bottom corner for his first of the afternoon.

Similar to the first half, the game slowed down after that with a midfield battle preventing chances to fall for either side. But in the 74th minute, Hearts broke quickly and Morrison was released into the box, where he rifled the ball home in at the far post from a tight angle to seal the win.

"Effort wise I can't fault them," said Player Transition Coach Dave Bowman. "We lost two sloppy goals and the penalty I'm not sure about. But to lose a goal right on half time was a bad one.

"When you look at the development of the players, Hearts are further ahead than us - age-wise and the length of time they've been full time. We're predominately quite young, either part of the youth team or just out of it.

"But they stuck in. They did try and play, I can't fault them. I thought that, at least, they competed and competed well in some areas of the pitch. The bad point is I don't think we tested their goal."

Highlights from today's match and full reactions from Dave Bowman and Jake Davidson are available here.

Next up for the Reserves is a trip to St Mirren on Tuesday 11 February. It's a 2.00pm kick-off at the Ralston Training Centre.