RESERVES GET BACK TO WINNING WAYS AGAINST MORTON 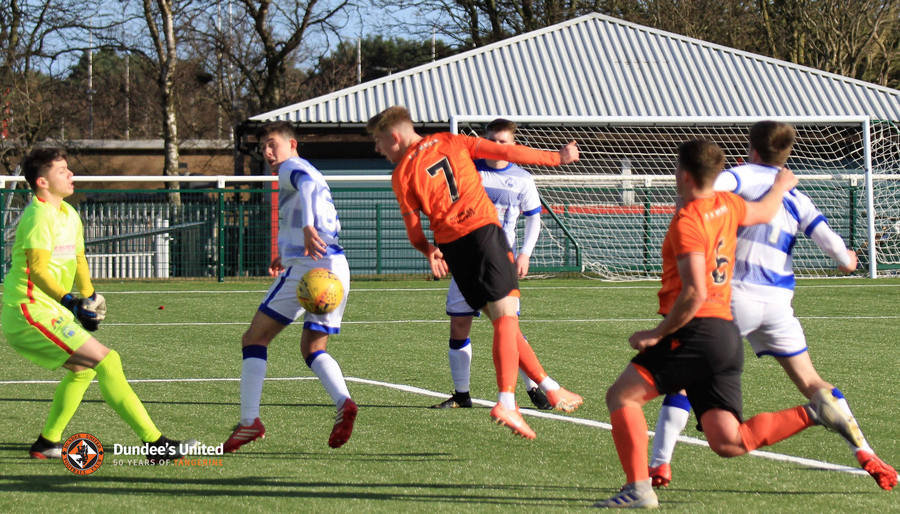 The Reserves picked up their first win since the end of January as they produced a confident and composed performance to run out 4-0 winners over Greenock Morton at Whitton Park.

Two stunning goals from Logan Chalmers and a third from the Trialist had United flying at half-time, with 16-year-old Fin Malcolm slotting home in the dying minutes to mark his Reserves debut with a goal.

It took just seven minutes for Chalmers to fire home the opening goal. After a driving run from Chris Mochrie through the middle of the park, the Trialist threaded the ball to the 19-year-old just outside the box who cut it on to his left foot before pinging it directly into the top corner.

Chalmers decided to have a goal of the month competition with himself nine minutes later as he produced an even better strike. With the ball bouncing at him across the pitch, he opted to flick it in the air to bring it under control and struck the half-volley with vigour into the top far corner.

Mochrie came close to adding a third in the 26th minute after he was released beyond Morton's defence from a long ball by Nathan Cooney, but he couldn't make the contact to lift the ball over Christopher Wylie.

United's third would arrive less than ten minutes later, however, after some fancy footwork from Declan Glass allowed him to keep possession on the right-wing before delivering a low cross into the six-yard box. The Trialist had positioned himself brilliantly to make the connection and knock the ball over the line.

Chalmers went close to sealing his hat-trick six minutes after the restart when he received the ball at the back post, but Wylie rushed out quickly to close him down and block the shot.

In the 77th minute, Fotheringham turned on the afterburners as he chased the ball down on the edge of Morton's box to win back possession but saw his shot deflected wide.

Rhys Caves, who came on for Chalmers midway through the second half, went close at the resulting corner when he flicked the ball towards goal at the near post, but Wylie stuck out a leg to keep the scoreline down.

Two Academy Graduates would  make their debuts for the Reserves today as Layton Bisland came on for Nathan Cooney in the final ten minutes to join Malcolm who had replaced Glass in the 61st minute.

The celebrations wouldn't stop there for Malcolm who marked his first Reserves appearance with a goal five minutes from time. The young striker produced an excellent touch to bring down Archie Meekison's pass before slotting a low finish beyond the keeper.

"Some of the football we played was just a joy to watch, especially in the first half," said Player Transition Coach Dave Bowman. "Because of the makeup of the team, we didn't have many defenders playing, so they knew they were going to have to keep the ball and keep it moving.

"It was a good learning curve for them. Everyone in the Club knows their talents going forward but they had to do it on the defensive side as well and I thought they equipped themselves well.

"I'm delighted for Fin Malcolm, he was out a while with an injury. He has only just turned 16 which made him eligible to play with the Reserves. It was a great ball from Archie but a great touch and finish also so that was good for him.

"Logan's two were magnificent, the second one is just ridiculous - classic Logan. That is the sort of thing he can produce. Sometimes when Logan was a kid he would be pass, pass, pass and then he'd score things out of nothing."

Highlights and full reactions from Bowman and Chalmers are available now.

Next up for the Reserves is a trip to Dingwall to take on Ross County in the match which was called off earlier in the season. It's a 2.00pm kick-off on Monday 24 February at the Highland Football Academy.