FOOTBALL IN TIMES OF ADVERSITY - A HISTORICAL PERSPECTIVE 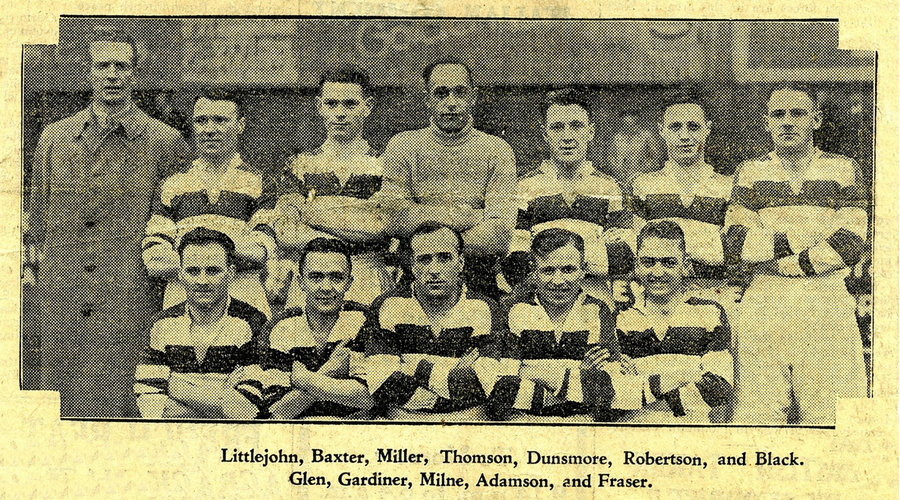 In the first instalment of this two-part feature, we explore the history of the Club in the face of previous global and health challenges, starting with the Second World War.

Two Saturdays down and goodness knows how many more to follow is the angst being endured by all Arabs who are missing their weekly football fix.

Of course, given the present circumstances, football is very much of secondary importance as the world struggles to fight the Coronavirus pandemic.

Certainly, bar those old enough to remember the Second World War, these are unprecedented times with personal freedom so restricted.

With no resumption of play until at least the end of April - and with no guarantee that it will start then – football is off the menu.

At best, not a ball will have been kicked for some seven weeks.

And that prompts the question if this is the longest ever break apart from close seasons which until the early seventies lasted full three months.

United suffered their first defeat of the season - 2-0 at home to Leith Athletic - the day before war was declared.

But as the 1939-40 campaign was only four games old, pronouncing the season null and void was an easy decision for the football authorities and all football was suspended.

The gathering of large crowds was one of the main reasons for the premature closure given the potential threats from air raids.

Yet, by the end of the month, a wartime league was up and running with United being one of 16 in the hastily organised Eastern Regional League commencing seven weeks after the suspension of play.

The SFA had withdrawn the Scottish Cup but, responding to the Government’s wish for distractions from the privations of wartime, a new trophy was introduced. Named the Emergency War Cup, it differed from the Scottish Cup in only two respects – it was restricted to Scottish League clubs and the first round involved home and away ties.

And this competition was to provide United supporters their first chance of supporting their side (see lead pic for the line-up) in a major final at Hampden.

The Black and Whites’ opponents were Rangers, a club for which such occasions were almost second nature. The crowd was officially restricted to 75,000, half of the capacity of what was then the world’s largest stadium. However, in an example of the limit being treated merely as a guide, newspaper reports suggested it was nearer 90,000 when the teams appeared.

United were expected to provide little more than a support act to the Glasgow club but despite facing a team containing many of the top players of the time, United went on the offensive and frequently had Rangers under pressure.

On one of those occasions, a free kick taken by Arthur Baxter deflected off Rangers defender Woodburn to Tommy Adamson, who swept it into the net. United’s players and fans celebrated and the Rangers players made no protest but the referee found a reason to award a free kick for offside.

Although Adamson was behind the Rangers defence when the ball came to him, Woodburn clearly played him on. Littlejohn and his team mates protested vigorously, but to no avail.

United shrugged off the blatant injustice and continued to dominate for the remainder of the first half. Rangers came into the game more after the break and scored the game’s only goal fifteen minutes from the end.

It was heart-breaking for the United men, who had played above themselves, yet had nothing to show for it.

The nature of wartime made it inevitable that the men who took Dundee United to the Club’s first cup final would soon go their separate ways. Within weeks, the Club would not be fielding a team at all.

As the Battle of Britain developed in 1940, there was understandable debate as to whether it was appropriate for organised football to continue.

In June the Scottish League voted to close down for the duration of the war and it would have no direct responsibility for running any of the leagues that operated during that period. The regional leagues that had been introduced in October 1939 were not retained, although clubs in the western version added Hearts, Hibs and Falkirk to their number to form the Southern League. Attempts were made to gain support for a Midland League but United were among a number of clubs which, having met to discuss the concept, concluded that it was not financially viable.

Although a number of clubs – most notably Dundee FC, who would not play again until 1944 - decided to close down entirely, the United board were very reluctant to do so and investigated an ingenious method of staying alive.

Having been given the impression that the SFA would suspend its normal objection to any of its members also seeking membership of the Scottish Junior FA, United did just that. In early August they were admitted and were also accepted into membership of the Forfarshire Junior FA and the Midland Junior League.

However, they were eventually forced to withdraw when the SFA did an about-turn, decreeing that dual membership could not be sanctioned.

The United board, under the chairmanship of William McCutcheon, were left with no option but to cease playing.

The Club’s instinct for survival, tried and tested on numerous occasions already, ensured that this would be a temporary measure, but in the mean-time there was an intriguing development.

The announcement was made that a new club had been formed, called United Juniors. The manager was Ally Gallacher (who would become manager of Dundee United in 1957) and he was assisted by two familiar names - Jimmy Allan and Sam Irving, both of whom resigned from their managerial positions with Dundee United.

The new club was in turn admitted to the SJFA and began playing in the Midland Junior League, having leased Tannadice for their home games.

Three players who had been with Dundee United were among those signed and for Tommy Adamson it was a big comedown from a few months earlier when he had played, and “scored”, in the cup final at Hampden.

The United Juniors would continue for four seasons, even though Dundee United’s hibernation lasted just one.

The North Eastern League was formed in June 1941 and the new competition introduced an innovative means of making their fare more attractive. Acknowledging the uncertainty of player availability due to the movement of men in the forces, the league was split into two separate series, either side of Christmas. However, in the second series a bonus point was awarded when a club managed to achieve an aggregate “win” over home and away meetings.

Between 1939 and 1945 a total of 133 players represented Dundee United and several were servicemen who had been professionals before the war. Although United’s status did not enable them to enlist the top players of the day, players not usually seen at Tannadice proved an attraction. Norwegian internationals Boye Karlsen and John Sveinsson were popular with crowds and other prominent players included the former Dundee and Bolton winger Willie Cook.

As the country was still at war, it did not re-introduce its own league structure for season 1945-46, although the clubs themselves decided that there should be a return to national leagues.

They retained the name Southern League and the divisions were labelled A and B, to reflect the fact that they had no direct connection with the 1939 versions.

United could not complain about being placed in the B Division as they had been in Division Two in 1939.

Like everyone else connected with football, the Tannadice board was thankful for a return to a national structure and manager Charlie McGillivray continued the established wartime policy of putting together a basic squad of players, supplemented by guests when available.

On the eve of the new season, the general perception was that the defeat of Japan was still some way off, so it came as a surprise when, on August 15, that country’s surrender was announced.

The Second World War was finally over but, as the new league structure had begun, the Scottish League agreed to let it run its course for what was said would be a transitional season with no promotion or relegation.

So, although football was played throughout the hostilities, in effect, some seven seasons had come and gone, of which none count in the official records!

Part two of this article will appear next week, so until then stay safe and healthy.