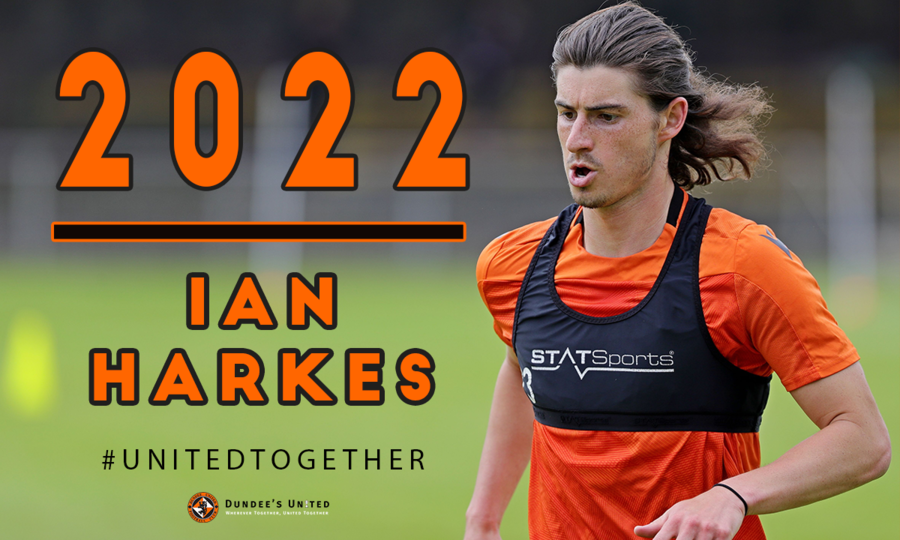 Dundee United Football Club is delighted to announce that midfielder Ian Harkes has signed a new contract, which will keep him at Tannadice until the end of the 2022 season.

Harkes, son of former USA national team captain John, became the first American national to wear the Tangerine shirt when he debuted in January 2019 after enjoying two full seasons in the MLS. He has since made 57 appearances for the Club, scoring three goals.

Ian said: "I'm delighted to continue my time with the Club. I feel like I've progressed as a player since arriving in Scotland. Coming across from the States I wanted to get games and a run of form which the team has helped me to do. Hopefully I can keep that going to the next level. It's going to be a challenge, but we have a great team and everyone is going to be fighting for a place which will only make us better.

"I've made more than 50 appearances for United so with this extension I want to hit another 50. Also an international call-up is an ultimate goal of mine. I've not been capped for the US yet but I'm not ruling out my Scottish heritage. It's nice to be on the radar but the next stage I have to perform and give myself that platform."

Having come through the youth ranks at DC United, and being presented with the Hermann Trophy, awarded to the best college soccer player in the US in 2017, Ian signed his first professional contract with DC and went on to make 27 appearances in his debut season. The 25-year-old has also been capped by the United States Men’s National Team at Under-20 level.

He left his home-grown club at the end of the 2018 MLS season and move to Scotland to join the team his grandfather James supported having been born in Fleming Gardens, close to Tannadice.

Ian would make his debut four days after signing in a 4-0 victory over Montrose in the Scottish Cup, and he marked it with a goal in the 92nd minute. In his first season at United, the attacking midfielder would become a mainstay in the team and help towards the Premiership play-off final.

He then continued that form into our title-winning season, making 31 appearances across all competitions and adding another two goals to his overall tally, one of them being United’s fifth in our 6-2 derby victory back in August 2019. Ian was also recently included in the Ladbrokes Championship Team of the Season alongside another six United stars and his form has had media suggesting he may be in line for a national call up in the near future.

Sporting Director Tony Asghar said: "Ian was an integral part of the team that won promotion to the Scottish Premiership and I am delighted we have managed to extend his contract.

“He has shown great determination since joining to adapt to our environment, and we believe that he will continue to be a key part of our future successes."