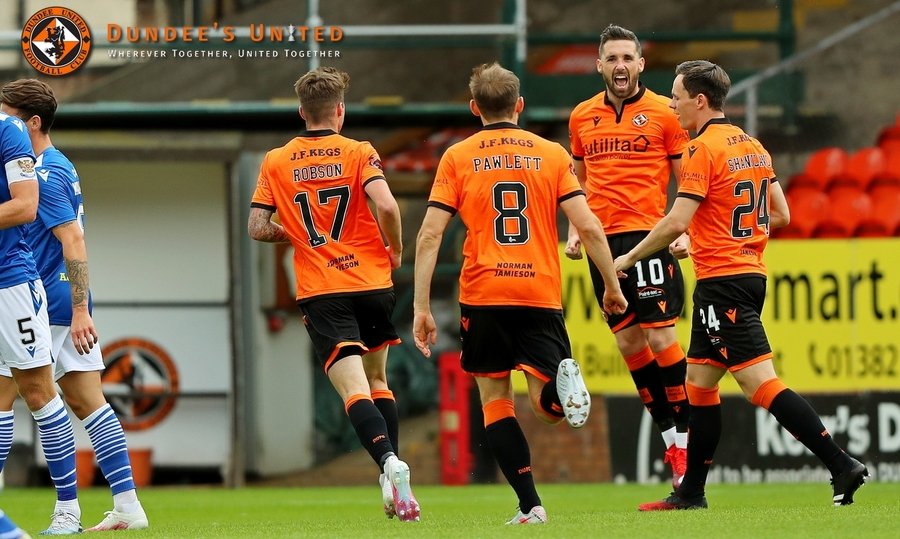 After they were given a socially-distanced guard of honour by the visitors, captain Mark Reynolds did the honours on his 50th appearance.

With Our Academy graduate Lewis Neilson making his starting debut, United started in excellent fashion in the grand reopening after lockdown and a Nicky Clark penalty had us flying after just six minutes. The striker celebrating his return to competitive action after missing a chunk of last season due to injury.

United looked in fine fettle when the visitors had Michael O’Halloran sent off for a second caution able offence just before half-time.

However, United were caught by a sucker punch with a terrific volley from Liam Craig on 56 minutes to bring parity to the scoreline.

United made a spectacular start after just six minutes, Clark putting them ahead from the spot.

Ian Harkes found himself clean through on goal before passing back to Liam Smith. His shot struck the raised arm of Craig and referee Clancy immediately pointed to the spot. Clark found the right-hand corner with the kick and United were 1-0 up.

United opened up the visitors again on 12 minutes but Parish did well to come out and block Jamie Robson’s shot. 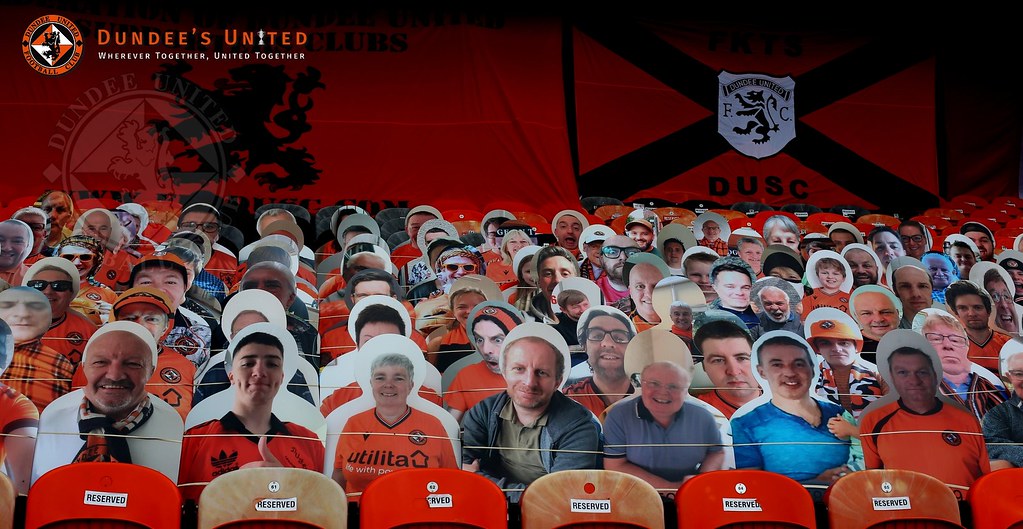 O’Halloran was yellow-carded for a tackle on Peter Pawlett right in front of the technical areas and it would prove significant.

A mistake by McNamara let Robson pounce and he played the ball back to Lawrence Shankland, whose shot was blocked. Almost immediately, it was Pawlett’s turn to test Parish.

United were playing well and, with half an hour gone, Calum Butcher fired the ball just over the bar.

Robson picked up United’s first caution for a foul on Jason Kerr before Saints lost O’Halloran to a second yellow. He went in late on Butcher right in front of referee Kevin Clancy to leave the visitors down to 10 men just a minute before the break.

Three minutes into the second period, Shankland bobbed and weaved his way inside the box, left defender Liam Gordon on the floor, but his powerful shot cleared the bar from 10 yards.

A nice one-two with Clark sent Shankland clear but once again he couldn’t find the net.

Then came the visitors equaliser against the run of the play.

The visitors were looking confident now and United needed keeper a Siegrist double-stop to thwart Wotherspoon then McNamara on 63 minutes.

United brought on Bolton for Neilson as Micky Mellon changed the formation.

Harkes then took the ball from a Siegrist throw and ran all the way to the Saints box but shot straight at Parish.

Cammy Smith came on for United, as the game edged towards the final ten minutes.

On 83 minutes, Pawlett worked a terrific one-two with Shankland and seemed to have opened Saints up but a superb tackle from McNamara denied the United attacker.

Cammy Smith almost nicked the win for United in stoppage-time but he was denied by Jason Kerr.After the match, Manager Micky Mellon said: “Of course, when you go a goal up and the opposition do down to 10 men you would expect as professionals to see it out. We were unable to do that but we will learn our lessons from that. I was delighted with some of our play and performances.”

United now look forward to a visit to Fir Park next week to take on Motherwell and the opportunity to build on the return of one point today.