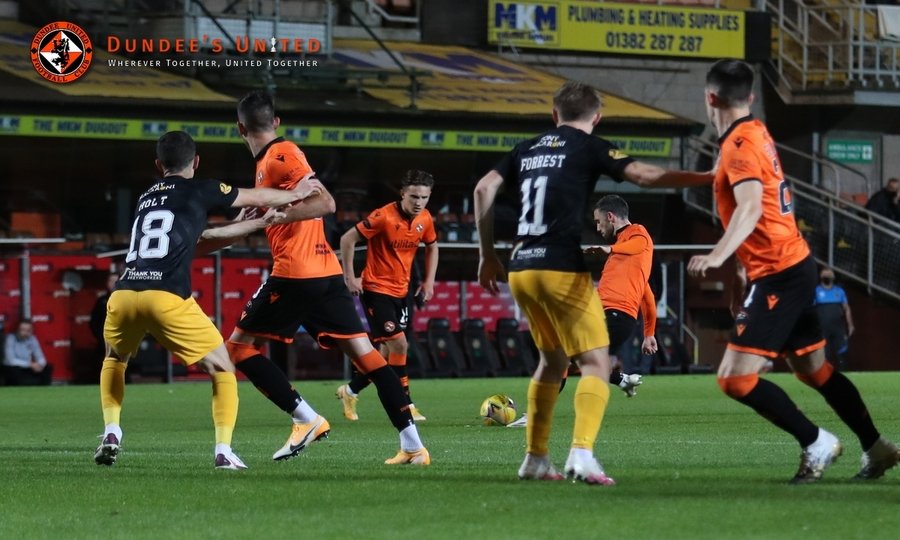 Dundee United went down at home to a battling Livingston side in the final game before the league takes a pause for international fixtures. An early goal through a Nicky Clark free kick accompanied by much fine attacking play offered plenty of promise in the early stages. But United lost their grip of the game as time wore on, and in the final reckoning Livingston deserved their win, scoring twice without reply in the second half to claim the three points.

Calum Butcher was granted the captaincy, and his first act in the armband was to win the coin toss, electing to have his squad shooting down the hill into the Eddie Thompson in the first half.

United began on the front foot, showing pace and intricate passing to threaten the Livi box.  Multiple points of attack kept the organised visiting defence guessing, with alternately Spörle, Chalmers and Shankland bursting into the box, fed neatly by Clark.

In the 18th minute, the pressure granted United an opportunity. An attacking Spörle was brought down by a clumsy Pittman challenge half a dozen paces outside the Livingston area. Nicky Clark and Our Academy Graduate Logan Chalmers both menaced over the dead ball, before Clark provided a moment of quality, thumping the ball decisively into the bottom right corner and United decisively into the lead.

There was an attritional feel the remainder of the half. The 48 hours of torrential rain that preceded the Friday of this fixture had softened the Tannadice turf, and led to missteps, slips and imprecision in the tackling. Captain Butcher thrived in the conditions, breaking up embryonic attacks and releasing United’s pacier wide men.

A talking point pre-match was keeper Siegrist dropping out through injury, allowing Deniz to make his first start in the United goal since 2018. Livingston ensured he was kept on his toes throughout the first half. Deniz made an excellent double save on the half-hour mark as Allan Forest attacked from the left and got the shot away. His effort was parried only to be struck by Robinson from the right. A great reaction save saw the ball tipped over the bar. The away team stung the palms of the United keeper several more times as half time approached.

An uphill struggle greeted the Tangerines as Livingston brought a blood and thunder approach to the second period. United met this approach head on, winning 50/50 challenges and defending with as much aggression as Livingston brought in attack. However, a moment’s defensive lapse granted Bartley time on the edge of the United area, and the experienced midfielder played a sharp ball through for the onrushing Guthrie to guide past Deniz.

Micky Mellon’s men responded well to the setback, throwing themselves bodily into the midfield fray, matching Livingston in the air and on the ground. Captains Butcher and Bartley were to the fore, clashing regularly, with the United man coming out on top on key occasions.

Changes for United high and wide on the 75-minute mark saw Peter Pawlett and Our Academy Graduate Appéré bring fresh impetus to the Terrors in attack, but the gain remained bogged down in the middle of the park.

On the 90th minute, Allan Forrest was beneficiary of an aggressive Livingston break that saw three attacking players bear down on a stranded Deniz. Forrest slotted the ball home, putting his side ahead. United maintained their energy and industry, but couldn’t find another chance in the two minutes of stoppage time.