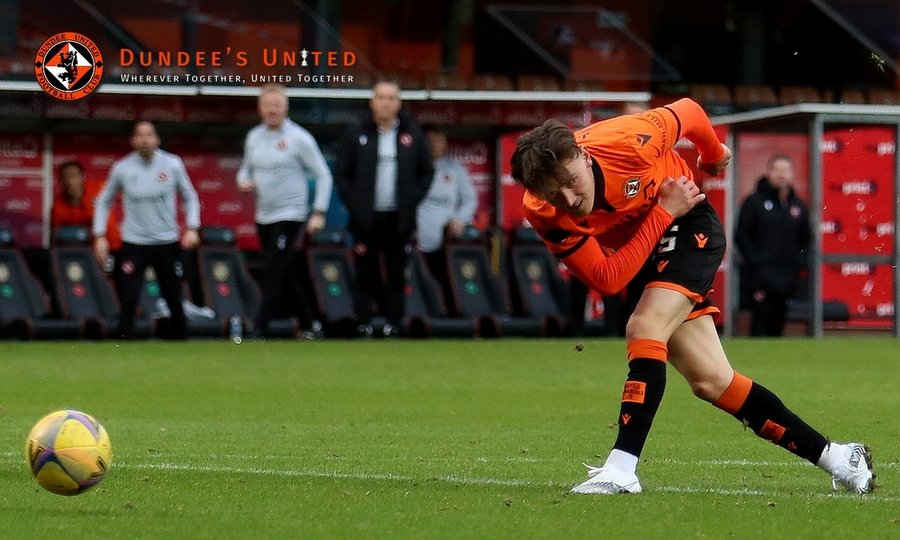 Dundee United battled for every ball as they fought their way to an important point at home against one of the strongest teams in the league. Our big Swiss goalkeeper Siegrist marked his return to the squad with an outstanding performance, keeping his goal as secure as a bank vault in Zurich against repeated Aberdeen raids.

United again saw changes to the starting XI, as they welcomed internationalist Lawerence Shankland back up top, playing alongside the current season’s top scorer Nicky Clark in the vanguard of a 3-5-2. At the back, the rangy figure of Benji Siegrist made his reappearance in the United goal after a number of games out through a muscle strain. It was a United team most would agree is approaching full-strength.

Aberdeen arrived at Tannadice looking to continue their drive to be the third force in Scottish football. Their first team boasted dozens of international caps and several continuous seasons of European experience, and under Derek McInnes they have earned a reputation as an organised defensive unit that rarely concedes. This season has seen them add goals to their game, with the Dons enjoying one of the rare positive goal differences in the league.

The opening period saw the matching formations cancel each other out, a fierce competition erupting in the midfield for control of the momentum of the game.

Aberdeen generated the first clear opportunity. The pacy Hedges slipped a ball in front of the onrushing Watkins. Siegrist read the danger and arrived at the ball with alacrity, interrupting the snapshot. The deflected ball ballooned high but retained its goalward trajectory. United were saved by the acrobatic Connolly getting his boot high and hammering the ball off the goal line and away over his shoulder.

The Terrors responded strongly to the Aberdeen pressure. Both Bolton and Robson shone out wide, driving the ball forwards and shutting off or disrupting Aberdeen attacks.  Shankland worked well with Clark and Harkes to turn United possession through the middle into chances.

Frequent turnovers marked play, with both teams keen to attack on the counter and contest possession constantly, leading to pinballs ricocheting around the midfield.

United found an opportunity after 20 minutes as Pawlett drove down the throat of the pitch before playing it wide to Bolton, who drove to the byline and knocked a cross beyond the back post. Shankland cushioned it back across the six yard box where Clark was loitering with intent. The Aberdeen defence cleared, but with clear alarm bells ringing in their ears.

The first half concluded with a period of Aberdeen pressure, but United, and Siegrist in particular, stood firm. 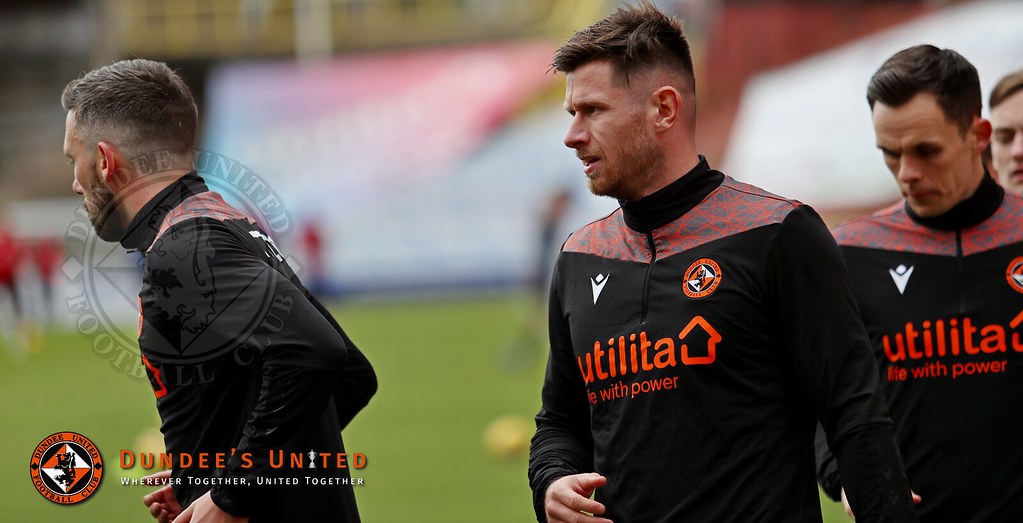 The second half retained the theme of Aberdeen pressure and stubborn United resistance. The entire United back three of Reynolds, Edwards and Connolly were frequently charged with breaking up or blocking off attacks, and were a credit to themselves and their teammates.

The lack of supporters has been felt keenly throughout the season to date, but perhaps never more so than it was in this fixture. It would be easy to imagine a packed Tannadice giving a vocal backing to their newly promoted team as they fought for every ball. It was a tenacious display that would’ve had the fans in the stands erupting to every tackle, every clearance, every referee’s decision. An echo of that absent passion came from Benji Siegrist, as he broadcast vocal instruction, entreaties and enthusiasm the length of the pitch in his booming Swiss voice.

A moment of excitement for United arrived ten minutes into the half as new number 9 Marc McNulty was substituted on, with Nicky Clark making way. The forward and Scotland cap McNulty had been held back from his first appearance to be allowed to prepare his body for the rigours of first team football, but any concerns that he was in anything other than excellent condition were quickly allayed. He buzzed around the top end of the pitch chasing balls, creating space and pestering the Aberdeen defence, helping stifle the opposition attack and pin back their defence.

Our Academy Graduate Logan Chalmers arrived on the pitch alongside Dillon Powers as part of a double substitution for Pawlett and a limping Calum Butcher. The exciting prospect from United’s youth academy immediately created a scoring opportunity, providing the legs for a lightening counter-attack, leaving a trail of white Aberdeen shirts at his rear like a comet’s tail. Only a stout save from Lewis denied him the goal. Chalmers picked up what seemed to be an injury late on, but bravely battled through it, Micky Mellon having exhausted his substitutions.

A full five tense minutes of additional time were indicated. United played where they could and scrapped when they had to to keep Aberdeen at bay. The full-time whistle and the attendant point see United rise to 6th in the league table.