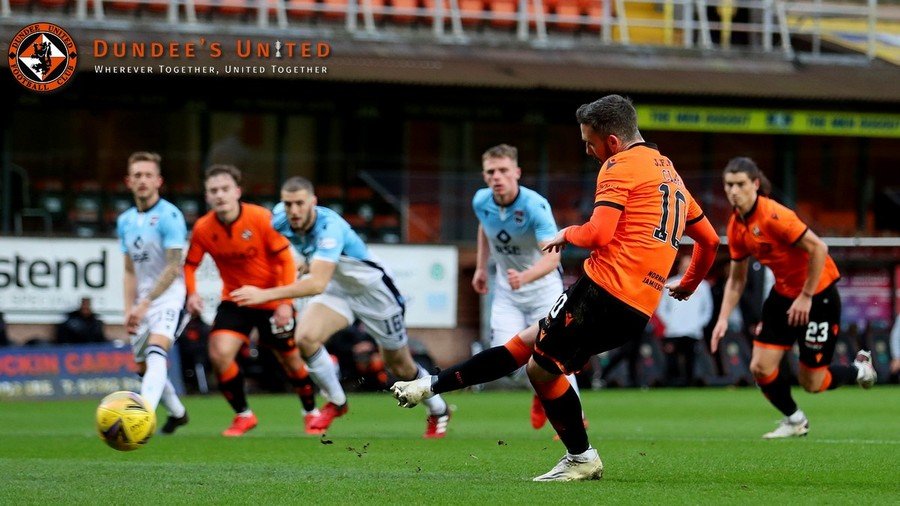 Dundee United led from the front for over 70 minutes as a quality performance secured all three points. Facing a Ross County team desperate for a result, and playing in a cold gale force wind, United handled both the opposition and the conditions impressively. Nicky Clark was the man providing the goals, with one expertly dispatched first-half penalty followed up by a well crafted second-half finish off his chest to keep the points at Tannadice.

The vast supporters' flags that cloak the George Fox seats billowed and strained at their ties in a powerful easterly wind.  Weather warnings were live for Tannadice and its surrounds as the gales brought in thunderous rain squalls across the afternoon.

With new loan signing Mark McNulty confined to the stands with a strain, the Terrors approached the game with a 4-4-2, headed up by Shankland and Clark. United captain Reynolds won the toss and elected to shoot down the slope, taking both the gradient and the wind advantage for the first half.

The opening minutes were all United. Peter Pawlett in particular stood out, bursting forward onto a perfectly weighed through ball, riding the attentions of two defenders and only denied a chance by an outrushing County goalie. Shankland and Clark continued their organic interplay, with Clark laying off balls to Shankland who popped up in positions right across the frontline, seeking space. United were threatening.

As the wind brought groans from the straining stands, so United’s forceful breaks forward caused the County defence to creak. The defence buckled on the 18-minute mark as Ross County captain Iain Vigurs handled the ball in a panicked penalty box, giving away the penalty and presenting United with a deserved chance to take the lead. Nicky Clark, so often the man to convert the spot kicks, stepped up. With a few steadying deep breaths, the composed forward stepped smartly up and struck the ball into the bottom right of the net, leaving the goalie stranded.

The rest of the half saw repeated raids into the opposition final third, with both Shankland and Pawlett coming close with well-crafted chances. In the other direction, County kept United honest. Advancing central defenders helped feed the ball through the midfield and create half chances. The steady 45 miles per hour headwind shut off the aerial channel and blunted the away team’s attacking options.

The half concluded with a worrying head knock for captain Reynolds as he fought to rise above the rest and win a defensive header.  After a few concerning moments as the physios conducted a head injury assessment, the solid defender was cleared to see out the half.

The second half began with a bang for United.

On 51 minutes, United won a foul roughly 30 yards out from goal. Peter Pawlett lofted in a ball to the back post, where it was won by captain Reynolds, rising high. The ball ricocheted, was half-cleared, and struck again by a determined Reynolds. Nicky Clark provided the final touch with his chest to guide the ball beyond the sprawling goalie, giving United a firm 2-0 advantage.

United controlled much of the possession and for the thirty minutes on from Clark’s goal, and looked the more likely of the two teams to score. Fuchs came on for Harkes with plenty of time spare to make his debut, looking sharp in the middle of the park.

On 81 minutes however, a long ball rode the gale force winds from County’s goal deep into United’s half. It was collected by the fresh legged substitute Oli Shaw who finished neatly past Siegrist.

This setback could’ve led to a nervy ending, but in truth United saw the game out with the calmness and control that typified the performance as a whole.