NEXT UP: ST MIRREN (A) - TEAM NEWS AND HOW TO WATCH 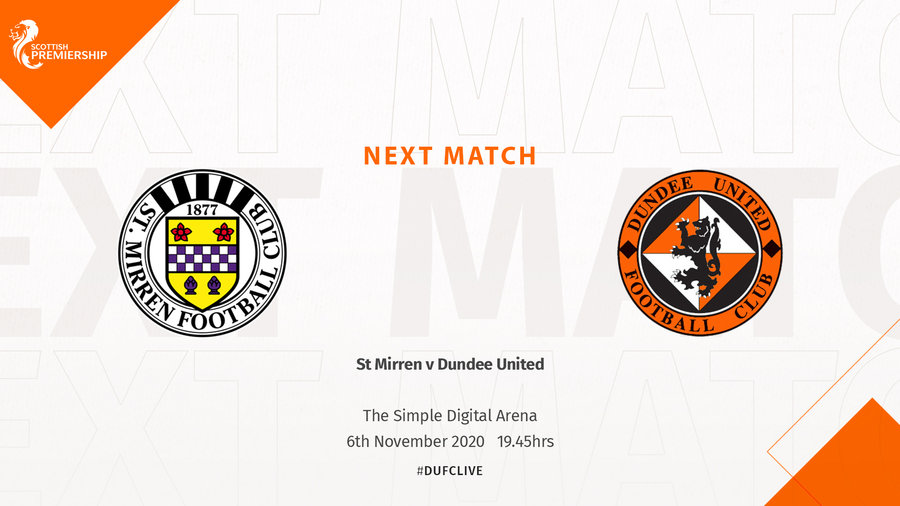 United travel to Paisley for a Friday night Premiership battle under the lights.

Manager Micky Mellon will have the vast majority of his squad available to choose from with Mark Connolly and Marc McNulty both stepping up training this week with a view to being involved on Friday after missing out last week. Logan Chalmers remains on the long-term injury list but is beginning to accelerate his rehab with the removal of the protective boot and fellow Our Academy graduate Declan Glass continues to respond well after recent knee surgery.

United come into this one with the confidence of last week’s 2-1 victory over Ross County. Nicky Clark’s double securing the points as Jeando Fuchs made his debut coming on as a late substitute. Confidence is further enhanced by the inclusion of striker Lawrence Shankland in the Scotland squad for the upcoming play-off final in Serbia.

Our hosts are looking to get back playing football after recent frustrations and two postponed games. They will look to improve on their last Premiership outing on Saturday 26 September when they lost out 1-0 at home to Kilmarnock.

In the only previous meeting of the teams this season, goals by Shankland and Sporle gave United a deserved three points despite Connolly’s late effort making the scoreline 2-1 in the Terrors favour.

The match officials on Friday night are David Munro (referee) who is assisted by Graham Chambers and John McCrossan. Alan Newlands is the fourth official.

The game will be streamed live and below are the options for watching the stream.

What time is the game and how can I watch it?

The game kicks off at 7.45pm and the options for following the action are as follows:

UK based DUTV subscribers can listen to full audio coverage from 7.15pm.

International DUTV subscribers can watch the full match with coverage starting at 7.15pm

How do I become an International member?

If you live outside the UK and Ireland, you can catch all the action from the season by subscribing to DUTV. Filled with fresh content and keeping you up-to-date with the latest news, interviews and features from Tannadice and the High Performance Centre at St Andrews it is a must for United fans the world over.

More importantly, you can also watch live streams of every home and away Premiership fixture, and all the above is only £16.99 per month.

Can I watch this with my VST pass?

No, please note Virtual Season Ticket holders do not get access to this game as it is an away game.

Can I buy a PPV ticket for this game?

With this game being an away game we are unable to show it on our PPV site but check St Mirren's website for their PPV offering.