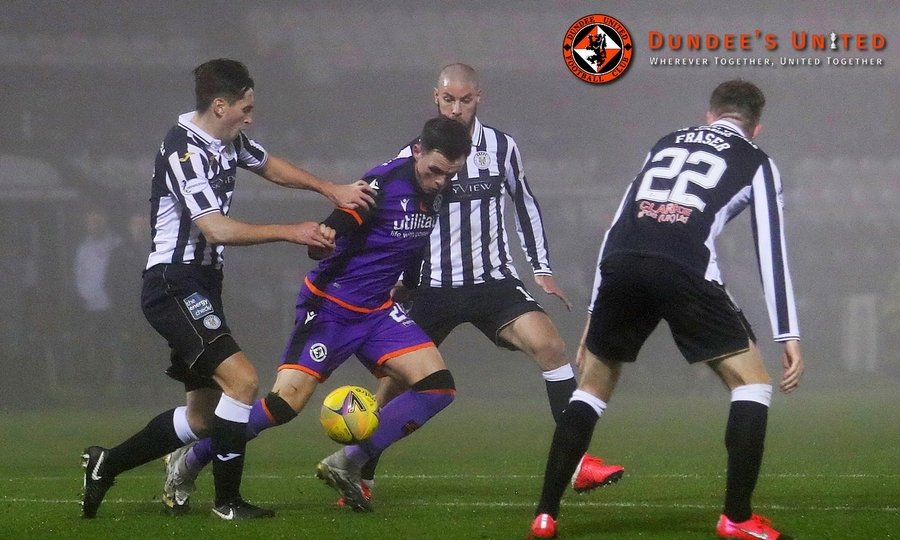 United made it four unbeaten in the Premiership with a battling point in foggy Paisley.

Starting with the same eleven who had secured the three points at home to County last week, United were up against a St Mirren team facing action for the first time in 27 days.

The 0-0 result means the Tangerines remain fifth in the league.

It was a game of few clear-cut chances, as the Terrors racked up their third stalemate of the season, in tricky fog conditions in Paisley.

The opening moments were scrappy, with neither side able to settle down. However, it was United who showed the most attacking intent in those early exchanges.

St Mirren came into the game and controlled possession and territory for most of the first half but it was United who had the games only shot on target on 16 minutes with a raking Harkes drive from 25 yards forcing a save out of Alnwick in the Buddies goal.

A minute later, the hosts had a great chance. Mason picked out McGrath wide open in the United box. Reynolds blocked the intital effort before Jamie Robson heroically diverted Richard Tait’s driven effort away from goal and out for a corner.

On the half-hour mark, Peter Pawlett won a free-kick in a dangerous area on the left. Nicky Clark swung in a whipped delivery which just evaded the head of Ryan Edwards before going out for a goal kick.

The Terrors were defending everything that came towards their box with Reynolds and Edwards on the end of most deliveries and Siegrist was not asked to make a save.

There was a bizarre situation four minutes into the second half when it looked as if Clark had won United a free-kick right on the edge of the box but referee David Munro adjudged Clark to have fouled the defender and gave the award the other way much to the bemusement of those in purple.

Conditions in Paisley worsened as a thick grey fog enveloped the players on the park, making visibility difficult.

A double change for the Terrors on the hour saw Dillon Powers and Marc McNulty replace Ian Harkes and Peter Pawlett as the Gaffer tinkered with the shape of the team.

Despite the changes, the home side continued to have the majority of possession of the ball although McNulty showed clever play to win a corner for United as the Tangerines had their first meaningful attack of the half.

The introduction of Paul McMullan, who replaced Luke Bolton, brought some attacking intent down United's right and almost immediately he had an impact. He drove into the box and when his cut-back fell at the feet of Butcher, his effort was deflected behind.

McMullan again caused danger for the host when he burst to the by-line once more but on this occasion, his cut-back was cleared before Clark could pounce.

There were St Mirren cries for a penalty with three minutes remaining as substitute Obika went down in the box under the challenge of McMullan although the United man had clearly won the ball.