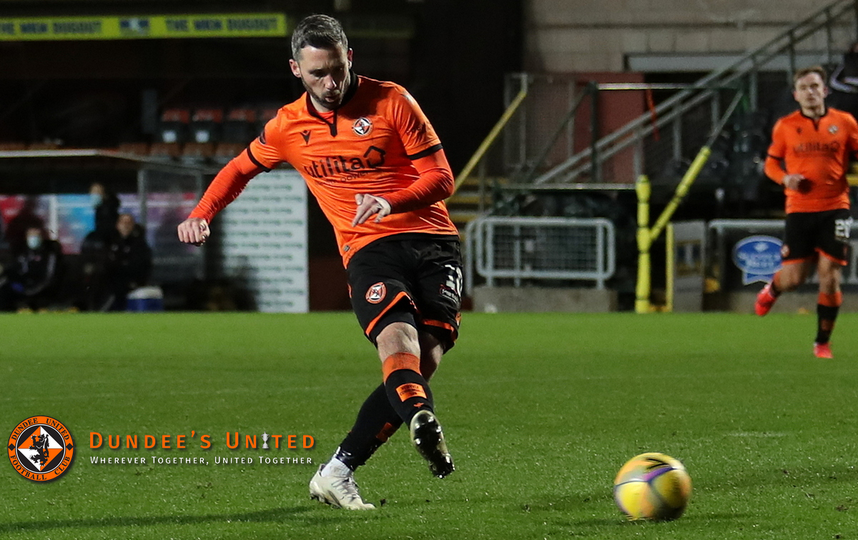 Dundee United secured all three points in the league after recovering to see off a stubborn Hamilton Academical side.

With the visitors rock bottom of the league, all the smart money was on a convincing home win. For a brief second half moment, Hamilton threatened to tear up the script. Nicky Clark stepped up to score two classy goals late on, and the visitors missed a penalty, allowing United to claim the victory.

Micky Mellon named an unchanged outfield ten from the League Cup match against St Johnstone last midweek. Returning from the triumphant Scotland camp, striker Lawrence Shankland found a place on the bench, with fellow Scotland cap Mark McNulty leading the line alongside Nicky Clark. Benji Siegrist returned between the sticks, with Deniz on the bench.

United’s now trademark defensive solidity marked the opening period. An aggressive Accies failed to leave an imprint on the tangerine defensive fortifications, and the Terrors tore forward with pace at every chance.

Mark McNulty displayed his class on twenty minutes to ignite a break with a back heel. The striker burst forward, bearing down on a desperately backtracking Hamilton defender. McNulty played a pass through a thicket of recovering Accies defenders to find an attacking Sporle, but the Argentine missed his moment by a matter of inches. The pressure resulted in a free kick which Clark struck well but narrowly wide.

Jeando Fuchs was formidable in the midfield, bringing a subtle touch and intelligent running to complement an impressively industrious performance. His efficacy was highlighted by the attention paid him by the opposition. Odoffin collected a yellow card for a particularly hard challenge. The Cameroonian cap remained unbowed and continued to win the physical battle throughout the opening half.

Approaching 40 minutes, Calum Butcher supplied an excellent lofted pass from midfield to release a charging Liam Smith on the right. The young full back caught the ball with a lovely clipped cross with his first touch, right on the byline, finding the chest of McNulty who cracked a shot off at goal.

The game was scoreless at half time, but with United very much in command. Fuchs and McNulty in particular were shining bright.

A chill mirk fell on Tannadice as the sun set, and the plummeting temperature wicked the heat from the game in early stages of the second half. The excellent Fuchs was relieved on the hour by Ian Harkes, with McMullan and Sporle also making way for Bolton and Shankland. For all their intent and intelligence throughout the game, United were struggling to find the final pass to take the lead.

Hamilton suddenly turned the tables. On 65 minutes, a McMann cross was netted by Callachan. United were behind, with a mountain to climb.

McNulty, so often the supplier of class in the game, played a lethal through ball to set Smith loose on the advanced right. The full back clipped another quality delivery into the box, and Nicky Clark slammed home a decisive equaliser. Hamilton had led for ten nerve shredding minutes.

United’s tails were up. Another tangerine tide swept up the pitch just minutes later, leaving the Accies defence all at sea. A failed clearance was nodded forward by McNulty, feeding the feet of Clark at the edge of the box, who rifled home a thunderous strike.

This rollercoaster had a final loop de loop before full time, however. Hamilton cracked a ball against Robson on the edge of the box, and the referee declared the resultant contact a handball. United players were livid as their hard won three points were thrown into late doubt.

Ross Callachan, the first goal scorer, stepped up to attempt to convert against big Benji in the United goal. The tension was high, but Callachan’s effort was higher still, the striker hammering the ball up into the Eddie Thompson.

With just a handful of minutes left, United calmed the game down, and secured the vital three points. Nicky Clark was deservedly named Match sponsors' Primero Contracts Man of the Match.