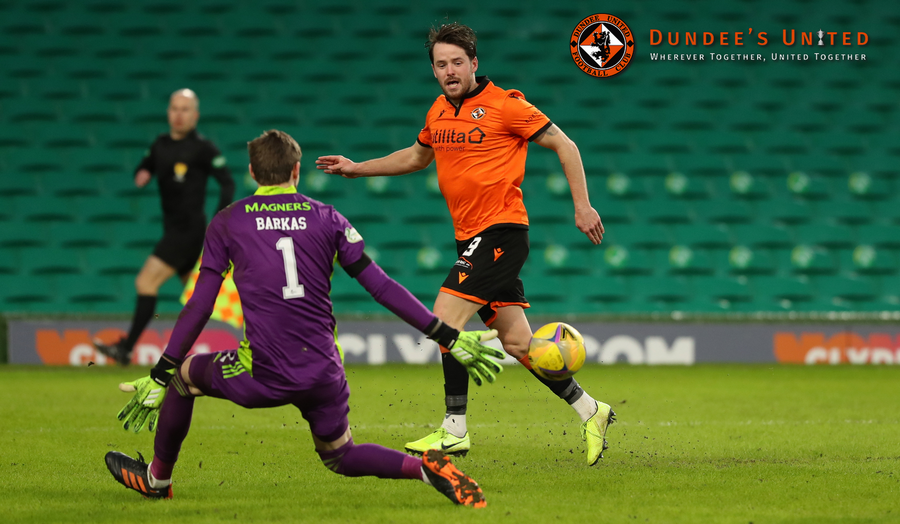 United lose 3-0 at Parkhead as goals by Soro, Turnbull and Edouard give Celtic all three points.

United went into today’s game unbeaten in their last three matches and sitting fifth in the Scottish Premiership. Nicky Clark’s last minute equaliser against Motherwell on Boxing Day at Tannadice kept United one point ahead of Livingston.

Celtic had won their last five in all competitions, including their Scottish Cup Final triumph against Hearts. Neil Lennon’s side sat second in the Scottish Premiership, sixteen points behind league leaders Rangers, but with three games in hand.

United’s previous encounter with Celtic was a narrow one goal defeat at Tannadice back in August, Ajeti’s strike seven minutes from time proving to be the winner for the Glasgow side.

Before kick-off there was a minute's silence to mark the passing of legendary Dundee United manager Jim McLean who sadly died on Boxing Day. Both sets of players wore black armbands to remember United’s most successful manager during whose tenure the Terrors won two Scottish League Cups, the Scottish Premiership as well as were runners up in the UEFA Cup in 1987.

Celtic made three changes to the side that beat Hamilton Academical in their last encounter, Barkas replacing Hazard in goal, with Jullien and Laxalt replacing Taylor and Bitton in the starting eleven.

United manager Micky Mellon made four changes from the Motherwell game with Pawlett, Clark, Edwards and Harkes all stepping up to the starting eleven. McMullan and Bolton dropped down to the bench, and Butcher and Fuchs missed out altogether.

First Half Summary - United started the first half brightly and coped well with the attacking force of Edouard and Griffiths in the early exchanges. Academy graduate Robson in particular was full of running and kept the Celtic attacks to a minimum.

Celtic had the majority of the possession in the opening stages of the game as expected, but United were well organised and Celtic had to resort to long range efforts to get past Siegrist. The running of Griffiths in particular was lively, but United were up to the challenge.

United’s first chance of the game came in the twentieth minute when a set piece move set up Pawlett, but his early shot was high over the Celtic goal.

The break-through for Celtic came in the twenty-fifth minute when a thirty-yard shot by Soro swerved past Siegrist in the United goal. It was the Ivorian’s first goal for Celtic.

United continued to have their backs to the wall with Reynolds and Connolly kept busy with the lively Frimpong looking to set up Edouard at every opportunity.

Celtic were unlucky not to be two ahead in the thirty fifth minute when a great save by Siegrist thwarted Griffiths. The Scottish international was set up by a great pass by Turnbull.

Shortly after, United had a chance to equalise when Clark’s corner was met by the head of Edwards, but his header just flew past Barkas’s post. Despite Celtic’s seventy percent possession in the first half, United were still creating chances and looking to hit Celtic on the break.

Celtic added a second with five minutes of the first half remaining, Turnbull picking up a loose ball in the box to fire low past Siegrist in the United goal.

Referee Willie Collum blew for half-time with the home side two goals to the good and leaving United with an uphill task for the second half.

Second Half Summary -  United almost scored straight away when McNulty was through on goal and slipped the ball past Barkas. Unfortunately, Celtic’s Jullien was on the goal line to clear. McNulty’s shot just didn’t have the legs to go over the line before the clearance. The Celtic player’s clearance did come at a cost as he collided with the post and was substituted soon after.

Celtic continued to have the bulk of possession as the second half progressed. United were having to defend deeply as wave after wave of attack came towards them. United’s best chances of catching Celtic on the break were now few and far between.

A great chance to get back into the game came when Shankland set up Clark in the sixty third minute. The striker’s shot was just wide but showed that the game was now opening up more.

Celtic nearly added a third when a Griffiths free-kick was defected off United’s wall into the path of Edouard. The striker’s quick fire shot was blocked by Siegrist.

Celtic’s third goal finally came in the seventy sixth minute when Edouard was set up by Griffiths. The Frenchman deftly lifted the ball over Siegrist into the United net.

A flurry of substitutions came after Celtic’s third goal which led to the tempo of the game slowing right down. With United looking at keeping Celtic from adding a fourth, and Celtic with one eye on their Old Firm fixture on Saturday, the game petered out with the home side three goals to the good as Willie Collum blew for full-time.

United remain fifth in the Scottish Premiership after today’s result and now play Aberdeen at Pittodrie on Saturday looking to get back to winning ways.