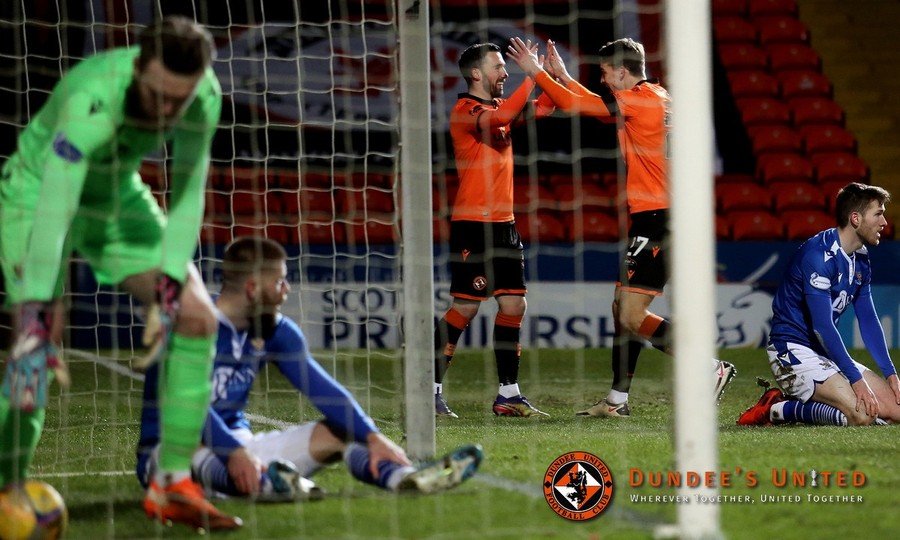 A Lawrence Shankland wonderstrike in the second half secured a point for Dundee United in a four-goal thriller with local rivals St Johnstone.

This was the first home fixture for the clubs since the passing of legendary manager Jim McLean, and the great man’s memory overshadowed the fixture. The players warmed up in black t-shirts bearing the iconic image of Wee Jim smiling and holding the league trophy in 1983. Players of both St Johnstone and Dundee United formed a circle in the middle of the pitch for a minutes’ applause, the tribute echoing in the empty stands, but also being echoed in the homes of all the Arabs watching.

The Terrors arrived with a fire in their belly, and in the opening minutes they drove and passed their way forwards with incision and intent. Lawrence Shankland and top scorer for the season so far Nicky Clark were playing just off the young hulk that is Our Academy Graduate Louis Appere, and the three front men showed passages of brilliant interplay at times, outfoxing the able St Johnstone defence.

United struck first and struck early. There were only nine minutes on the clock when Clark played in Shankland, who displayed enviable sang froid in the away box to slow the ball and play a return pass to an onrushing Nicky Clark. Clark knocked the ball across the 6-yard box where Apopere was waiting to place the ball past Zander Clark. A triumphant beginning, and a great goal on Our Academy Graduate’s 50th appearance for the Club.

All of United’s meetings with St Johnstone this season have been hard-fought encounters, with the Perth Saints consistently organised and dangerous from the set piece. The away side levelled the scores on 16 minutes. A well-delivered corner found a free jumper at the back post, and the ball was nodded home. The assist was by Wotherspoon, and the header by Saints’ Israeli striker Guy Melamed.

St Johnstone took the lead on 38 minutes, again from a dangerous Wotherspoon ball. The playmaker number 10 carried the ball wide on the left, before launching a cross to Chris Kane who glanced the ball beyond Siegrist and into the side netting.

The game was end to end, and had already produced more goals than all three previous meetings between the sides this season. But the pick of the bunch was still to come.

Dundee United under manager Micky Mellon have a tenaciousness. The Terrors displayed that characteristic in abundance as the second half got under way and Saint Johnstone looked to control the game. Opportunities were fewer in number for the home side in the opening stages of the second period, and it would take something a bit special to unlock the visiting defence.

Shankland, who had been his busy self, dropping deep to link the play and contest possession, managed to pick up a loose ball inside his own half wide on the right. The star striker was being guided to touch by a constellation of blue jerseys, with no United player beyond him to pass to.

United’s number 24 glanced up, spotted Saints keeper Clark slightly off his line, and thumped a targeted chip more than 50 yards. The ball looped high and fast, arcing down beautifully into the net just beneath the crossbar and just above the despairing glove of Zander Clark.

It was a glorious goal, one which will join the pantheon of great strikes by men in tangerine.

The stadium staff and fans at home shared a minute’s applause on the 83rd minute, a nod to his great league triumph in that year, and also his age when he passed.

The game played out to a draw, with both teams creating and defending half-chances. United take the two well scored goals and a valuable point as they prepare for a busy run of late-January fixtures.