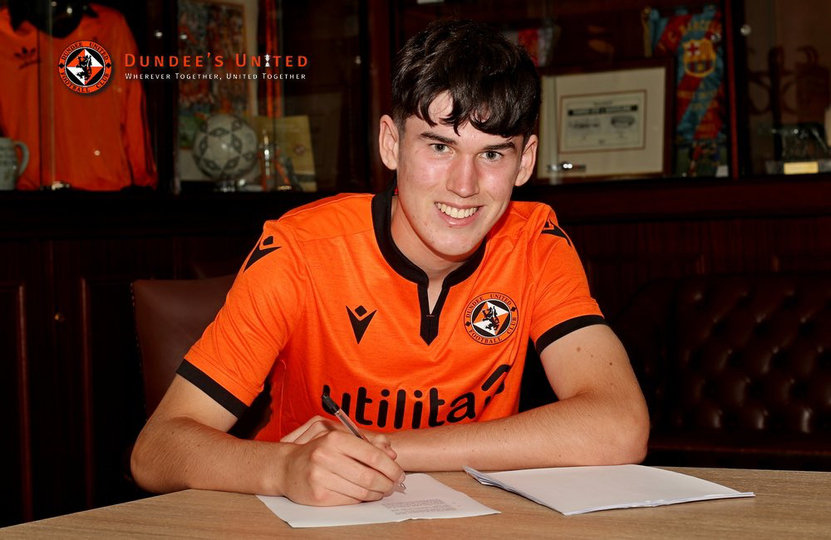 Dundee United are delighted to confirm that Jacob Comerford has signed his first professional contract with the Club after joining our Under 18s squad earlier in 2020.

After having his trial at the end of last season curtailed by the Coronavirus pandemic, Jacob joined from Hutchison Vale Boys Club on an amateur contract back in August with a view to earning this full-time deal, which will keep him at Tannadice until 2023.

Following in the footsteps of Lewis Neilson and Kerr Smith, Jacob arrived as a midfielder but has discovered during his time with us that he is also well-suited to being a defender and will look to continue his progress in a backline over the next couple of seasons.

Jacob said: "I’m delighted to sign my first professional contract, ever since I joined up with the Under 18s at the end of summer that has always been the goal so to finally get it done is a big achievement for me.

"Moving forward I just want to keep improving as a player and to keep enjoying my football, as we have seen in this last year that we can’t take it for granted. In terms of goals I’ve never really been one to set long term goals so my main aim would be to continue to improve as a player and cement my position in the under 18s and, hopefully, that leads to a pathway to the first team like I’ve seen first hand for Lewis, Kerr and Adam Hutchinson."

"For the short time I’ve been here, I feel like all coaches have been really invested in trying to improve me as a player and help me better my game. I feel like the club is moving in a direction that aligns with my ambitions as a player and person.

"I feel like Andy, Adam, Tam and the rest of the coaching staff want to see me continue to build as a player and, eventually, be in the first team within the next year or two. There are things we have been over that I need to improve if I want to be able to make that step but those should come with hard work on the training pitch."

Head of Professional Performance Adam Asghar added: "We're delighted to have Jacob sign with us on a full-time basis. He has worked extremely hard on and off the pitch to earn this opportunity, maintaining his focus during a difficult period for everyone in football.

"Jacob came to United initially as a midfielder from Hutchison Vale but has started a journey with us to develop into a centre back which he has committed to and has shown improvement in the last six months.

"Jacob must continue to show the mentality that has got him to this point in his journey and I look forward to seeing his progress at the club."