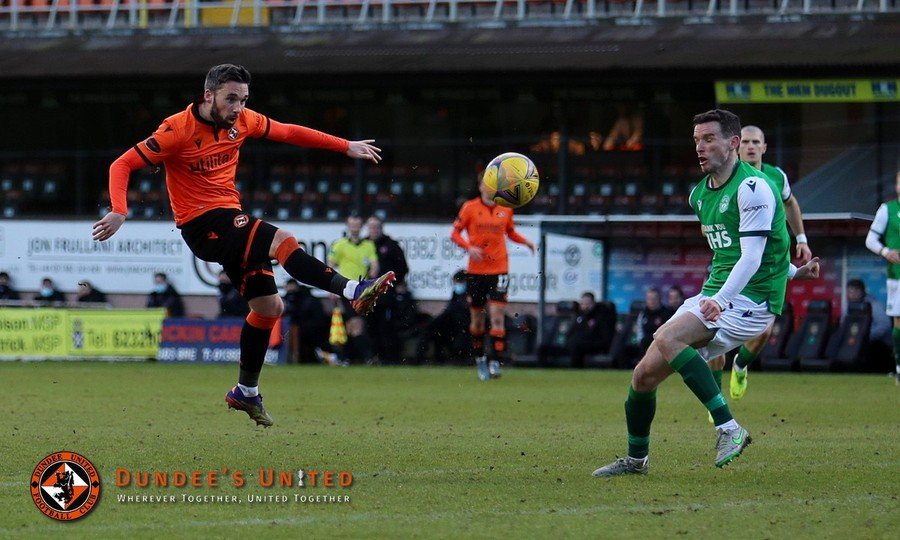 United began with intent and aggression, looking to recover quickly from the midweek humbling at the hands of St Mirren.

The first three chances all fell to the Terrors. Within three minutes the play went through Butcher in the midfield, out to Liam Smith, and wide to McNulty, whose ball to Nicky Clark gave the striker a chance to shoot. His effort was fluffed, but the movement was promising.

A minute later the play flowed down the left side of the field through Luke Bolton and Shankland, with Butcher being set up to strike. The abrasive midfielder’s shot was deflected high and very nearly fell into the top of the net, with Hibs goalie Marciano tipping it over.

From 15 minutes on, Hibs asserted themselves. Their midfield four became dominant, and the running from their front three were causing all sorts of problems for the United rearguard. The pressure led to United conceding foul after foul within 30 yards of Benji’s goal, allowing Hibs a succession of set pieces and the steady accumulation of chances.

Hibs had been hammering on the door, and only last ditch defending and some Benji saves had been keeping them out. On 21 minutes, they broke through. A corner for Hibernian at the East Stand end was headered towards goal. Benji palmed the ball out and Jackson Irvine laid it off to centre back MacGregor who blasted the ball into the roof of the net.

The visitors maintained their dominance up to half time, with United working hard going backwards for much of the closing stages of the first 45.

The Tangerines needed to come out after the break and battle their way back into the game, and that’s exactly what they did. The opening ten minutes of the second half were all United.

The home team won flurry of three corners plus attacking throw ins, and eventually pressured the grippit Hibs defence into leaking a chance on goal. A broken ball exiting the box from a United corner was met by midfielder Fuchs, who drilled the ball goalwards. His bazooka-strength shot fired narrowly wide.

Shortly after, Butcher broke forwards and had both Bolton and Shankland burning alongside him, with Hibs scrambling. Butcher waited until all the men in green were committed, then played in Shankland. The striker slammed the shot away, but it snagged on a defender and deflected onto a committed Marciano’s feet.

Hibs maintained an electric threat from the counter attack. Whenever they grabbed possession from the snarled-up midfield, they broke like lightening towards United’s goal. Last ditch blocks, fine-margin tackles and blocking runs kept the visitors out for twenty minutes.

It was from just such a break on 69 minutes that the visitors scored their second. Jackson Irvine took advantage of United’s loose possession in the attacking half, picking up the ball and breenging up the hill. As he steamed in on the United goal, Boyle ran in behind, picked up the ball and struck beyond Siegrist.

United certainly took control of the ball following the second Hibs goal, but every attack forward fizzled out in either a loss of possession or a strike wide of goal.

A clear handball by Hibs fullback Doig in the penalty area somehow was not awarded with a penalty, despite vociferous protestations both on the pitch and from the sparse United staff scattered through the Jerry Kerr stand. In the final summary, this may be seen as a turning point denied.

Micky Mellon put on Pawlett and Harkes into the midfield to try and add freshness. As the minutes ticked through the 80s towards full time, Shankland attempted several increasingly speculative efforts to produce a goal from nothing. Two strikes from outside the box failed to trouble Marciano.

As the final whistle blew on a hard week for United, the scoreline reflected the game at 2-0 to the visitors.

United again face a fast turnaround as they are scheduled to play Motherwell away in the coming midweek.