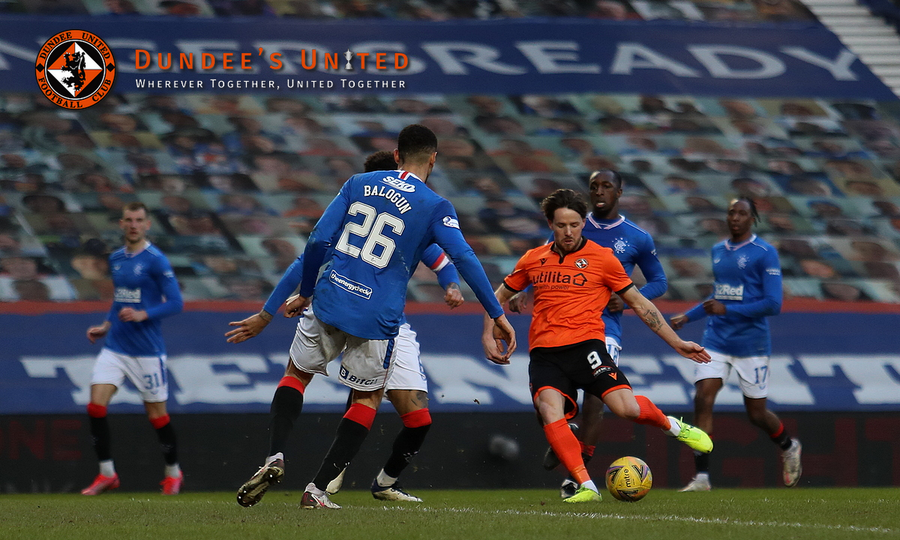 A positive start away at Ibrox for Dundee United failed to avert a four-goals-to-one defeat by a Rangers side still unbeaten in the league this season.

Micky Mellon’s Tangerines were up against an irresistible Rangers outfit, who had scored 69 and conceded only 8 goals in the league. Yet it was Dundee United who began with all the intent and aggression. In the opening twenty minutes, United were organised in defence and an ever-coiled spring in attack, ready and willing to launch counters whenever the option was on.

Two fine chances were created in the opening stages. Within ten minutes, Liam Smith bore down the right in an advanced position. He played a one-two with Our Academy Graduate Louis Appéré on the edge of the Rangers area. The young star returned the ball under pressure, and Smith fed on to Shankland. The striker nipped into the box, leaving the defence behind but triggering Alan McGregor to leave his goal line. The experienced goalie saved Shankland’s effort, knocking the ball out for corner.

On sixteen minutes, the Terrors snapped forward in numbers once again. Shankland fed Nicky Clark, with the midfielder carrying beyond several Rangers men then playing Louis Appéré in on goal. Alan McGregor again read the danger and met the ball milliseconds before Our onrushing Academy Graduate.

Rangers began to exert greater control as the half wore on. Benji Siegrist made his first decisive save on 20 minutes, when Joe Aribo sold Fuchs a dummy to clear himself space and struck a curling right footed shot towards Benji’s lower left corner. The big Swiss got down fast and knocked the ball wide.

The Rangers defence that had leaked three goals midweek to Royal Antwerp consistently coughed up chances to the marauding United frontmen. Clark, Shankland and Appéré were alternating dropping for the ball and running in behind. The Terrors looked the more likely to score.

It was the home side that opened the scoring, however. They followed up the first on 35 minutes with a second on 38. The first saw a speculative Aribo shot deftly deflected by Hagi just in front of Siegrist, skewing its line beyond the goalie’s reach. Minutes later, Ryan Kent pulled a sliced clearance out the sky on the edge of the area and rocketed a shot goalwards. An unfortunate clip off Ryan Edwards saw another deflected ball sail past Benji and into the net.

Morelos and Shankland traded fruitless chances as the first half drew to a close.

United failed achieve the same influence at the outset of the second half that they had achieved in the first. On 48 minutes, Joe Aribo scored the first quality goal of the game, pinging the ball beyond Benji, his strike glancing in off the inside of the post.

Chances of taking a point or three from the game seemed snatched away, and the remaining 42 minutes would become a test of mentality, fitness and character for the men in tangerine.

The dam held for twenty minutes. Rangers then benefitted from a moment of United calamity. Edwards played the ball back to Benji, but the goalie hammered his clearance straight into the pressing Morelos, and the ball rebounded into the United net. The game was already gone, perhaps, but this remained a dispiriting goal to concede.

Siegrist redeemed himself shortly after. Rangers were awarded a penalty, and Barasic, who converted two spot kicks in Eurooean football midweek, stepped up and placed a hard strike to the bottom corner. Benji made a fine save, making up for his earlier lapse.

United remained composed and continued to press and harry, limiting Rangers chances and stemming the tide.

The tangerine tenacity was rewarded with a neat consolation goal. The midfielders Fuchs, Butcher and Clark were once again under tremendous pressure on the touchline near the dugouts. They retained possession between themselves in tight areas, before clipping a long crossfield ball to Liam Smith, the only United man in any space. The right back stormed forward, and a momentary chance was created for substitute Marc McNulty. The loanee struck a lovely ball into the net, scoring his second for the Club.

Remarkably, this strike marked only the second goal Rangers had conceded at Ibrox this season. The home side retained control as the clock ticked down, and no further opportunities emerged.

Pockets of positivity can be picked out by the discerning viewer. United’s counterattacking prowess will unlock teams less watertight than Rangers, for example. Our Academy Graduate 16-year-old Kerr Smith made a late appearance from the bench. And we showed that we can create chances and goals against the very best the league has to offer.

Another trip to Scotland’s South West next week against Kilmarnock will hopefully see a similar positive start lead to all three points.