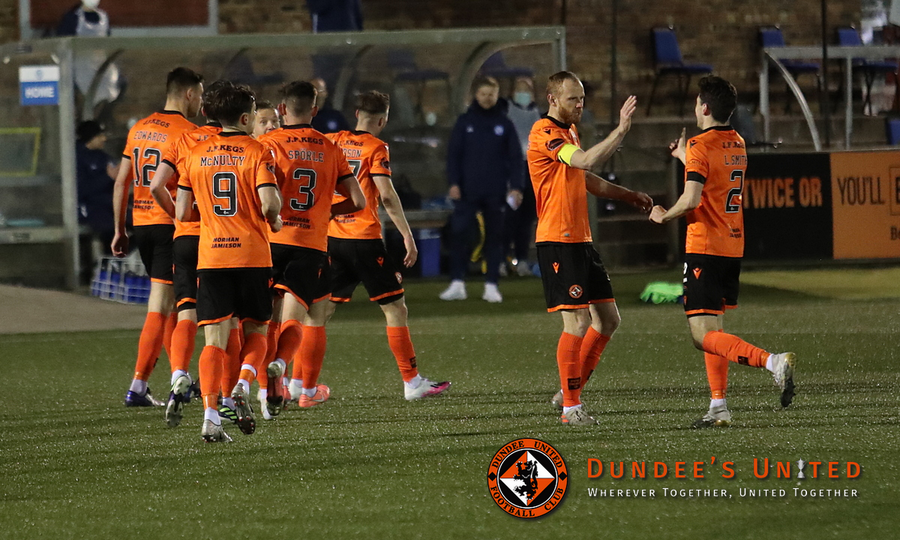 A slender single goal victory saw a dominant United progress in the cup at the expense of spirited near neighbours Forfar Athletic.

Dundee United arrived in the Angus town as firm favourites. The Terrors were sat 7th in the premiership, with the Loons the second-lowest ranked side left in the competition, propping up League 1. Forfar were also limited in numbers, with a handful of regulars cup-tied and only 3 outfield players named on the bench.

Forfar Athletic launched into the game with a vibrancy, winning a free kick in a dangerous area. The resultant strike went narrowly over, and it was followed over the bar shortly after by a ballooned Forfar effort.

United leaned forward menacingly and quickly took a grip of the game. Forfar retreated for much of the first half into a tightly-bound defensive formation, looking to launch direct counters through their diligent number 10.

The Tangerines were faced with the task of picking the defensive lock. Both Our Academy Graduate Robson and Liam Smith advanced down their flanks, nipping in incisive balls trying to find the likes of Shankland and Spörle through the blue-clad thickets of defenders.

The Loons were largely resolute, sticking manfully to their tasks of closing down space and retaining structure. United knocked the ball about and squeezed out a few chances, Shankland shooting over from close range before Clark forced a save from McCallum.

Clark had a chance to give United the lead on half time from a dead ball, but his sweetly shot free kick struck the stanchion and rebounded back into play. The referee blew for half time the scores level at nil nil, with the home team surely the more satisfied.

The second half began in a familiar mould. The away side carried passion and developed threats, particularly in the wider areas, but struggled to fight or dance their way beyond the tenacious Forfar defenders.

A frustrating ten minutes of play elapsed before United finally struck the net.

The Terrors had a corner on 55 minutes. The home side once again claustrophobically packed bodies into their box. United played the ball short to Liam Smith, who passed across the box to an awaiting Peter Pawlett. The midfielder glanced up to find his range then fired a low hard ball through bodies and into the bottom left corner. United ahead at last!

The goal didn’t alter the themes of the match, with United holding the possession and Forfar looking principally to their defensive duties whilst staying alert for chances to counter. Real good goalscoring chances were at a premium for both sides.

Our Academy Graduate Louis Appere, on for Shankland, created several scoring chances with his direct running and skillfull interplay. Just beyond the 80th minute he created a fine chance for the lively McNulty, whose shot was fumbled by the goalie before being secured.

Forfar weren’t going down meekly. A corner on 90 minutes saw the luminously-pink clad figure of goalie McCallum jogging the length of the pitch to join his forwards in the attack. The pinballing resultant ball was at length cleared by the United defence.

From that point, the ball was knocked forward and spent the remaining three minutes of additional time in the possession of the Tangerines frontmen until the referee blew for full time.

The single goal victory might not have dazzled, but United march on in the cup, where they will face the winner of Aberdeen and Livingston in the Quarter Final.