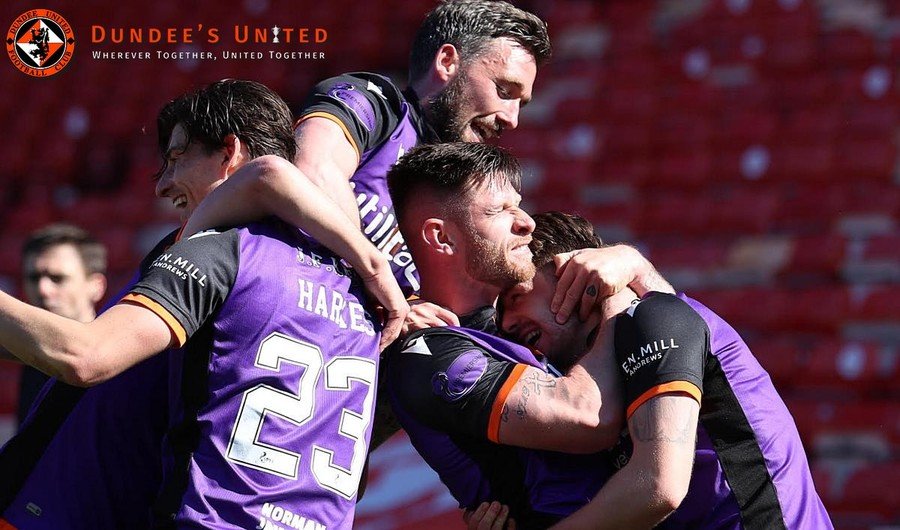 Micky Mellon’s men secured a Hampden spectacle for the supporters as his side secured a stunning three-goal victory in the North-East.

United left Tannadice on their journey north in a haze of tangerine and black smoke from supporters determined to back their team. The team had a chance to earn the Club a place in a Hampden semi-final for the first time since 2016.

The Terrors might have had a winning record against the Dons in the league this season, with two draws and a United victory, but they went into the game as bookie’s underdogs.

Dundee United were in no mood to be taken lightly, however. Micky Mellon named perhaps his strongest outfield 10, and the Tangerines dominated from an early stage.

Aberdeen’s best moments came early in the first half, with Kennedy and then Hendry hammering shots goalward. Deniz in the United goal made a vital double save. At such an early point in the game, these saves were pivotal.

Outside of those opening chances, United dominated. Aberdeen’s midfield, so robust across the league campaign, were unable to cope with the running and physicality imposed by Butcher, Fuchs and Harkes.

United opened their account after just 17 minutes. Scotland caps Shankland and McNulty linked up to great effect, with Nicky Clark feeding the former, who played through Mark McNulty. The on-loan Reading man knocked it skilfully round Woods in the Aberdeen goal for his 4th goal of the campaign. A great start.

The goal lifted United’s performance even further. More chances emerged. Harkes narrowly missed a chance as he threw himself with abandon at a McNulty cutback across the goal line, crashing into the post for his trouble. Fuchs then had a great chance saved when a sublime through ball from captain Reynolds set the Cameroonian loose one on one with Woods. Only a fine save denied him his goal.

The second goal was coming, and it arrived on 37 minutes. Nicky Clark struck a dead ball from a wide area into the Aberdeen box. It looked to be covered by a host of hulking Dons defenders, but Ryan Edwards accelerated in from deep, leaped high amidst the scarlet throng and headed United another goal clear.

Half time came as a relief for the home team, allowing them to catch their breath.

Glass’ charges came out renewed after the break and pressed hard at the Terrors. United carried on their attacking play but met an initially stout home rearguard.

On 54 minutes a Dons defensive clearance landed in the midfield.  McNulty and Harkes played smooth, classy passes between themselves as they rushed forwards. Harkes’ final through ball was a delight, leaving Hoban stranded, and loosing his striker. McNulty picked it up and buried it. His second, United’s third.

There was plenty time left to play but Micky Mellon’s men remained dogged, dominant and decidedly the better side on the day.

Full time blew, sending United through to the semi finals after a memorable performance and a resounding win.