UNDER 18s BATTLE HARD DESPITE DEFEAT AT HPC 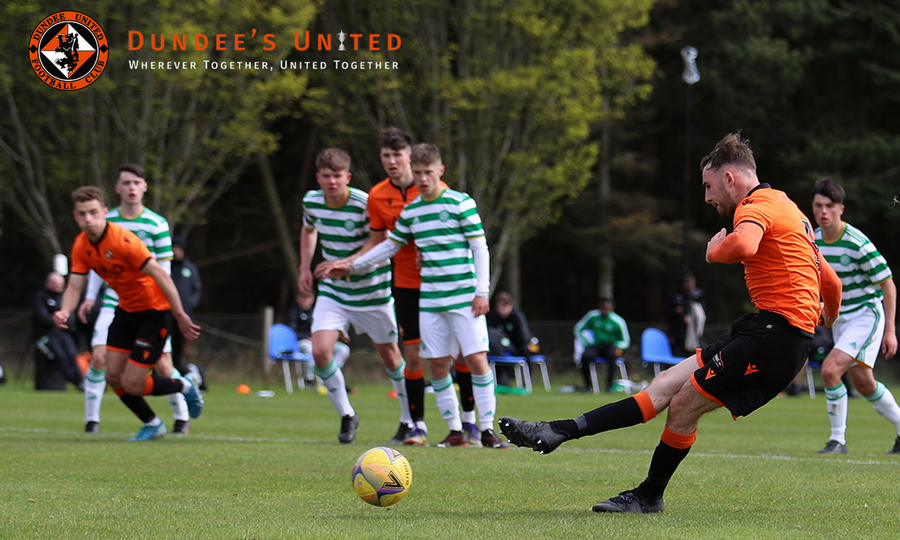 The Young Terrors suffered a difficult home defeat this afternoon as Celtic ran out 3-1 winners at the HPC at St Andrew's University.

Both sides were awarded penalties in the first half that saw the visitors leading at the break, but the Under-18s were unable to find the all-important equaliser in the second half as Celtic took the points.

The youngsters had to combat the elements in the first half as the blustery conditions played havoc with the ball both in the air and on the deck. Celtic had the wind behind them in the first half and it looked to have paid off after just four minutes when they took the lead.

The Hoops midfielder looked to have a rather ambitious effort at goal as he tried to strike past a blockade of United shirts. But the ball took a wicked deflection and caught goalkeeper Ruairidh Adams completely off-guard as it landed in the back of the net.

Lewis O'Donnell came close to an equaliser in the 20th minute with a shot from the edge of the box, but he pulled it just over the top corner. The midfielder would be involved in a quick United counter-attack three minutes later as he produced a composed turn in the middle of the pitch to get the Young Terrors forward.

The move ended with Flynn Duffy firing a low cross towards the six-yard box, but the Celtic keeper held on to it at his near post.

Shortly after the half-hour mark, the visitors doubled their advantage. A poor Celtic corner failed to beat Sam Lovie on the edge of the box but the referee, much to United's bewilderment, blew for a handball and pointed to the spot, with the taker sending Adams the wrong way.

Just five minutes later, the Young Terrors were awarded a penalty of their own after the Celtic defender handled the ball in the area. Fin Malcolm stepped up and slotted home his second penalty of the campaign.

With the wind behind them in the second half, United looked to get the early equaliser but came unstuck in the 53rd minute as Celtic were awarded a second penalty. The Young Terrors were looking to scramble the danger clear following a corner, with a green and white shirt going down in the process and the referee didn't hesitate to point to the spot.

Adams went the right way this time but the ball was just out of reach of his fingertips as it nestled in the bottom corner.

The young keeper would be called into action again five minutes later as the Celtic centre-half nodded the ball towards target from a corner, but Adams tipped it over. Then in the 69th minute, he would parry a Celtic free-kick wide as it looked to be sneaking in at the near post.

O'Donnell almost pulled one back for United in the 87th minute. After breaking past his marker, he got the better of the keeper with his shot but was denied by the underside of the woodwork as Celtic saw the remainder of the game out.

"The deflection on the first goal kills us," said Rhys Caves. "I thought we did well after that and we were well in the game until the first penalty, which is never a penalty. We had some good chances and got in good areas, but just lacked that final product.

"We can do better with the first goal, close them down quicker and not let them have a shot from that range but there's nothing you can do about the second goal it's just the referee's mistake. I thought we did well to get in at half time at 2-1, but we don't get that equaliser and there are no complaints about their second penalty.

"We came into the season thinking we could do really well but we've had a tricky start. It feels like nothing is coming off for us. Even though we're playing well we need to be more ruthless in both boxes.

"A lot of character is revealed when things aren't going well. We just need to stick together and, hopefully, get a win on Friday down at Hamilton, then next week at Aberdeen and lift the spirits a bit."

Next up for the Young Terrors is an away match against Hamilton at the FOYS Stadium on Friday 7th May.