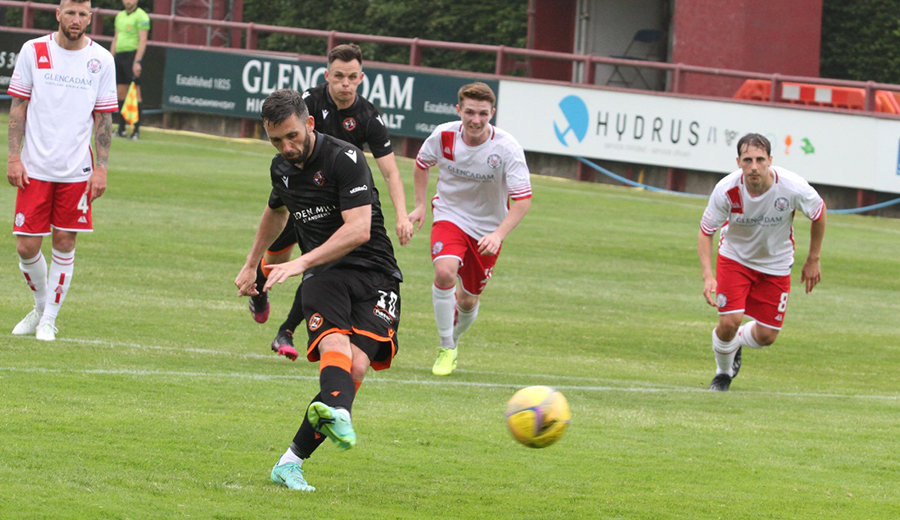 Dundee United named a strong XI to open their final pre-season friendly before the start of the League Cup, and the Premiership class showed from the outset against our Highland League neighbours.

Within the opening minutes, Shankland was creating chaos on the edge of the box, setting up a shooting opportunity. A defender got in the way of it, and the heavy deflection skied the ball clear into the stands.

From the resultant corner, United took the lead. Peter Pawlett took a low, hard corner straight to the feet of a moving Nicky Clark. Last season’s top scorer powered a precise ball into the bottom right-hand corner. A move straight from the training ground paying dividends.

United played an expansive game, using every blade of the Glebe Park pitch to stretch and stress the home team. Down the left, Sporle and Butcher interlinked to good effect, progressing the ball with intent. And on the right, Pawlett and Shankland ran rings round their Highland League defenders.

The fruitful movement on the right produced a peach of a goal on 20 minutes. Pawlett took the ball in the midfield and played a long pass down the right for an onrushing Liam Smith. The right-back captured the ball, brought it inside and returned it to an advanced Pawlett. The midfielder played a snappy one-two and struck the ball over Brechin’s goalie. Champagne football from United in this friendly.

The Terrors of Tannadice were bringing aggression to Angus, hammering in their third within less than half an hour. That man again Pawlett knocked in a quality free-kick earned by the fouled Sporle. Nicky Clark charged on to its flight and nodded it home.

Chances were falling like apples in season for United. Sporle very nearly made it four a minute later, lifting his shot just over the bar. Shankland barrelled downfield, flowing with the ball at his feet, and putting in a sweet cross that created danger but went unconverted.

Adversity arrived on the half-hour. Brechin played some nice triangles through the midfield and fired a shot low at the United goal. Siegrist was equal to it, firmly palming it away. Somewhere in the build-up, Sporle picked up a knock and went off limping.

Shankland won a penalty on 41 minutes. Nicky Clark stepped up and scored a sensational spot-kick, blasting the ball into the top left corner whilst sending the keeper the wrong way. A first-half hat-trick for the potent forward, and a first forty-five four for United!

Ian Harkes, fresh from his stateside nuptials, was introduced at half-time, along with Our Academy Graduates Logan Chalmers and Lewis Neilson.

Logan Chalmers popped up twice in quick succession in threatening areas, once on the left beating two men and shooting at goal, and moments later linking play from left to right to create another chance. His Our Academy cohort Neilson was soon in on the action, picking the ball off the toes of a Brechin man on the edge of the United box and carrying the ball up the field before feeding a winger. The result may not have been in doubt but the effort levels remained high.

A full seven bodies were introduced at the 60-minute mark, with Our Academy Graduates Fotheringham, Cooney, Mochrie, Meekison and Freeman arriving alongside Hoti and a trialist goalkeeper.

Almost as the changes were trooping into position, Brechin managed to pull a goal back. Frustration for the new arrivals, who promptly tried to make amends.

Freeman in particular down the right-hand side helped feed the attacking midfielders. Chalmers conjured up space and chances whenever he got on the ball. Captain for the half Harkes ordered his youthful charges around, and the much-changed side peppered the Brechin goal with shots. Kai Fotheringham in particular got on the end of great build-up play to shoot just over the bar.

With no out-and-out striker left on the pitch, Our Academy players were left goalless for all their excellent play. But the performance made it clear that there is very little between the starting XI and the academy in terms of ability.

The full-time whistle blew, ending a superb performance and whetting the Arab appetite nicely ahead of a return to competitive action next week.