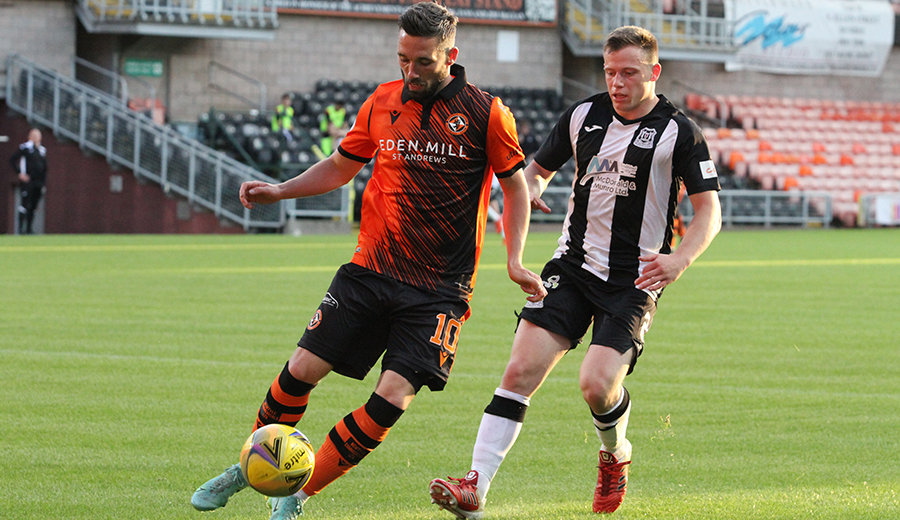 From a nervy start which saw them fall behind, United surged back with a six-goal salvo to defeat League Two Elgin City.

And with Arbroath beating East Fife, it sets up a potential section decider when the Red Lichties check in on Saturday.

For the first home game of the season, Head Coach Tam Courts made three changes from the victorious side at Kelty. Calum Butcher, Charlie Mulgrew and  Ian Harkes stepped down to the bench with Our Academy graduate Kerr Smith and Ryan Edwards – back from suspension – and Florent Hoti filling the vacant midfield spot. United started with three Our Academy graduates on the park and four on the bench,

The Tangerines received a terrific reception from the Arabs lucky enough to be amongst the 500 fans populating the Eddie Thompson Stand for the first time in 16 months.

However, they were in for a shock as the League two side bagged an early goal.

There had been a warning after four minutes when Kane Hester’s overhead kick bounced off the top of the bar.

And a minute later Hester did find the target when he latched on to long ball, held off Kerr Smith’s challenge and slipped the ball past the advancing Benji Siegrist for a surprise opener.

Boosted by that, the visitors continued to threaten with United looking a little shell-shocked.

On 19 minutes, United, who had started to find their rhythm, levelled.

As he was the case at Kelty,  Our Academy graduate Kieran Freeman was the architect.

He drilled a low cross from the bye-line which keeper Tony McHale, at full stretch, failed to hold and Lawrence Shankland was on hand for a simple finish.

Some confidence was now evident in the Tangerines' play and that was rewarded with a second goal five minutes later.

A lay-off from Peter Pawlett fell right into the path of Nicky Clark who chipped the ball over the advancing keeper.

Just after the half-hour mark, after the ball pinged about the box with the McHale twice saving efforts from Clark, Shankland blasted in a third with a searing first-time left-footed strike from the edge of the box which bulged the net!

For good measure, United added a fourth five minutes from the interval. Pawlett robbed a defender and went through to score in similar fashion to Clark’s goal.

At half-time both teams made changes. Butcher replaced Edwards in the back three and Matthew Cooper came on for Conor O’Keefe.

With the points effectively in the bag, United were knocking the ball about with the cohesion that was absent in the early stages.

And they added a fine fifth ten minutes after the restart.

Skipper Mark Reynolds's long pass found Clark who slid the ball into Freeman’s path and the youngster’s low-angled drive from 18 yards went in via the far post – his first goal for the Club to go along with his two assists!

With the result beyond doubt, Head Coach Tam Courts gave game time to yet more Our Academy graduates.

Midway through the second half, another new name appeared on the list of Tannadice scorers when Our Academy Graduate Chris Mochrie knocked home another beautiful low-driven Freeman cross after Clark had just failed to make contact.

With just over twenty minutes remaining, the crowd welcomed another Our Academy graduate onto the  pitch as 16-year-old Finn Robson replaced the outstanding Jeando Fuchs in midfield.

Seven minutes from the end, City substitute Josh Peters should have pulled one back, fiing over an empty net.

And only a terrific save by Siegrist kept out a superb Hester header to maintain United's five goal advantage.

At the other end, McHale denied Flynn Duffy a first goal by beating away his fierce drive from an tight angle in the dying stages.

This was a satisfying return to Tannadice for the crowd as they cheered their heroes off at the end of the ninety minutes.