CHRIS MOCHRIE: SUPER HAPPY TO GET MY FIRST GOAL 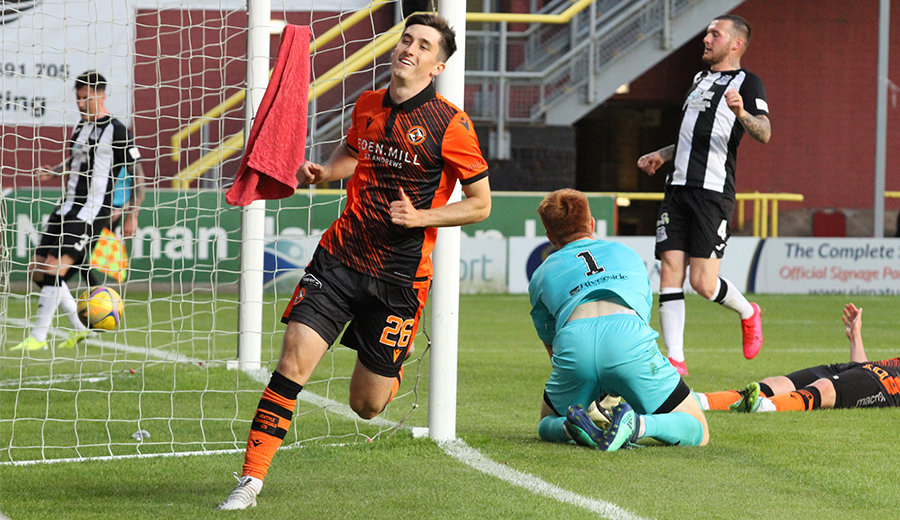 A seven-goal thriller was the ideal return for fans to Tannadice last night and for Chris Mochrie, it's a match that will live long in the memory as the academy graduate netted his first United goal.

Supporters returned home for the first time since March 2020 for our match against Elgin City in the Premier Sports Cup and were not left disappointed as they witnessed Lawrence Shankland, Nicky Clark, Peter Pawlett and Kieran Freeman get on the scoresheet with Mochrie rounding out the entertaining 6-1 victory.

United's youngest ever player, at 16 years and 27 days when he made his debut against Morton in 2019, got off the mark for the club shortly after the hour mark as he turned home a low cross from fellow academy graduate Freeman.

Speaking exclsuviely to the official Dundee United website after the match, Chris said: "I'm super happy to get the first goal of my career. But the main thing is it was a good win overall. The boys in the first half did well to come back from the setback because in a game like that a team will score and just look to sit in and make it difficult. But once we got the first goal back we were flying.

"Everybody was playing with a freedom and really expressing themselves after we were a few goals up. When you get that opportunity it's a chance to go and show what you can do and, thankfully, I was able to get the goal.

"I saw Kieran being played down the line so I thought I'd better get myself in the box. Clarky was right beside me so I was hoping it would miss him and land kindly for me, which it did. Credit to Kieran for the delivery and I'm just glad I could finish it."

It was a significant night for Our Academy as six graduates were utilised across the 90 minutes. Flynn Duffy, Kerr Smith and Freeman, who also scored his first goal in a Tangerine shirt, all started the match with Mochrie and Lewis Neilson coming on in the second half.

Midfielder Finn Robson was also handed his debut by Head Coach Tam Courts when he replaced Jeando Fuchs in the 68th minute, showing the fans in attendance that the future remains bright for Our Academy.

"It's great to go out and play in the first team with other guys who've come through the academy,' said Chris. "We've known each other for years, it's like playing with your mates. And to do it at Tannadice with the fans being back it's really good for all of us and I think we all enjoyed it.

"It's a really good squad we've got at the moment and all us young boys are feeling confident. After a few goals have gone in everyone's feeling relaxed and it was enjoyable to play in, especially when it was alongside your pals you've grown up with.

"None of us are just going to be given the chance to play - we've got to earn it. We're all working hard and know nothing is guaranteed. We've got to keep our levels high if we want a spot in the team."

Last season, Chris got his first full taste of men's football when he joined Montrose on loan. In a disrupted season he made 25 appearances, scoring twice, as he helped The Gable Endies to a play-off place in League One.

It's a move that looks to have paid dividends for the young midfielder who feels stronger and more equipped for senior football ahead of the new campaign.

"Coming into this season, I feel a lot more experienced and ready to play after the year with Montrose," admitted Chris. "I've got on the scoresheet tonight so, hopefully, I can keep getting appearances and try make an impact with United this year."