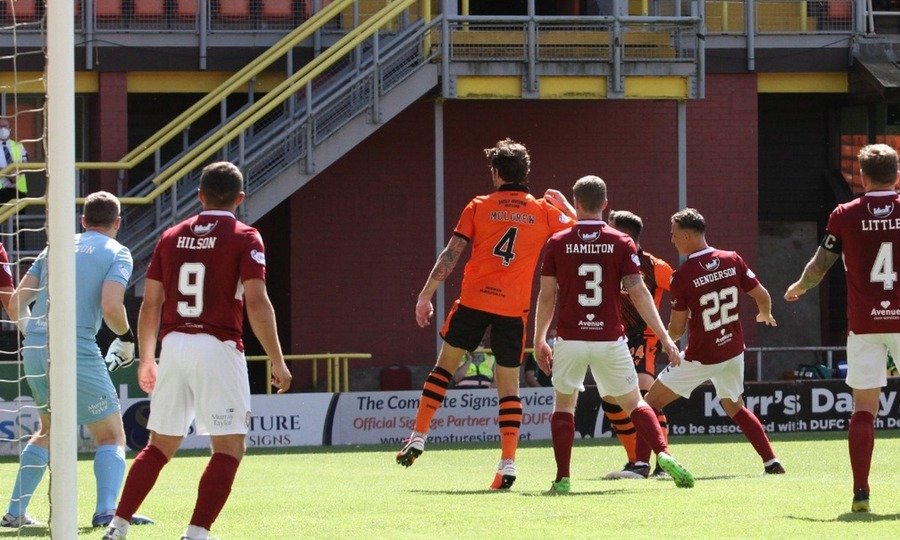 A stunning first half free kick by Charlie Mulgrew was enough to secure the win against doughty Arbroath in the League Cup.

Head Coach Tam Courts set out a strong starting XI for the visit of Dick Campell’s Arbroath. The Red Lichties certainly deserved respect, having caused United trouble at this stage of the competition in years gone by.

United began shooting down the slope towards the 500 supporters in the East Stand. The play flowed out from the three centre-halfs, and found fizzing expression through Our Academy Graduates Mochrie and Chalmers.

Chalmers sparked repeatedly on the right, taking on opponents and striking at goal. In the opening six minutes alone he hammered two balls goalward that had the Arbroath keeper.

Liam Smith and Our Academy Graduate Robson were back in their regular full-back berths, perhaps feeling the heat at their feet lit by the youngsters Freeman and Duffy in the preceding matches. The experienced pair looked composed, linking play forward well, offering options wide and high up the park. They were also solid at the back, adeptly defusing any bombs launched over the top by Arbroath’s backline.

Mochrie on 19 mins took the ball to feet in a congested midfield, spun, played it forward, and emerged from a thicket of opponents in possession and bearing down on goal. A moment of magic that had Gaston sprinting to smother.

If the Academy Graduates were putting on a shimmering first-half performance, it was a veteran who threatened to steal the show. The man on his second full home debut, Charlie Mulgrew, stood over a free kick alongside Logan Chalmers, perhaps 35 yards from the Arbroath goal. Chalmers feigned to strike the ball, only for the time-served centre half to step up and lash it straight into the bottom right corner. A finer dead ball goal won't be scored this season.

The home side were never going to get a carefree fixture against Scotland’s most successful part-time team. The Lichties found an outlet through Bobby Linn down the United right. The wide man managed two decent chances in the first half, either side of a goalward drive by Nicky Low.

As the half closed, United were dominating possession and enjoying by far the lion’s share of chances. But the visitors had carried sufficient threat to keep the premiership side on their toes.

The second half proved a more cagey affair, with United holding the ball at the back for longer, as Arbroath really made them work to defend their lead.

The home side probed left and right, but Campbell’s charges shuffled side to side in tight banks, pressing every ball and snapping at any chances to turn the ball over.

Lightening struck twice, with young Archie Meekison picking up an injury a minute or two later. He limped aided from the pitch.

United had used up all their substitution windows, and thus were unable to bring on another body to replace the departed Meekison.

The play was all Arbroath for a time. The established shape and personnel of the visitors repeatedly found gaps in the dynamic United X in front of them. A combination of fine defending and the safe hands of Siegrist kept Courts’s men ahead.

Academy Graduate Darren Watson, brought on in a forward role, excelled deeper in the formation breaking up play, drawing fouls and winning back possession as the visitors piled on late pressure.

Despite being a man down for the final fifteen minutes and Arbroath knocking on the door, United stood firm and kept a clean sheet. The 500 fans in the sunny East Stand applauded off their men, with their team sitting pretty at the top of group B.