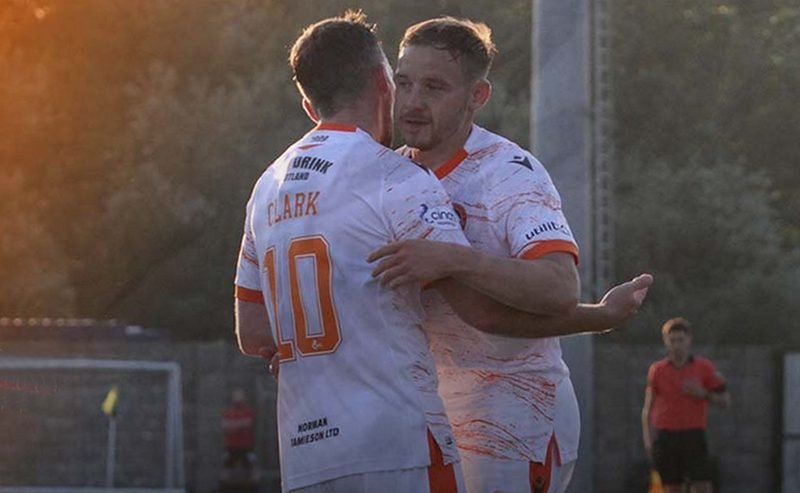 Peter Pawlett’s first-half strike earned the Tangerines a deserved victory over the League One Fifers to maintain their 100% record and confirm them as group winners.

All-in-all, it was a very satisfactory evening with 16 players getting game time ahead of the Premiership starting a week on Sunday.

The Fife hosts were giving as good as they got in the early stages, winning three corners in the opening fifteen minutes.

And from the last of these, striker Kevin Smith almost scored against his former club, heading inches over.

The momentum remained with the home side, as the much-changed visitors struggled to find any real fluency.

Just after the half-hour mark, Kevin Smith was booked for clipping the heels of Pawlett.

When United did attack, right wing-back Freeman was proving a positive outlet but clear-cut chances continued to be elusive.

Pat Slattery became the second Fifer to be booked for a reckless challenge on Harkes.

And five minutes from the interval, United’s newfound cohesion was rewarded with the opener. Harkes won possession in the centre-circle and Pawlett latched on his lofted pass, came through a challenge and getting the break of the ball before rounding the keeper and putting United ahead.

Just before the interval, Liam Smith almost doubled the lead. Having collected a Butcher pass, he slipped past a defender on the bye-line and his angled drive slipped through Scott Gallacher’s hands and the keeper was grateful to catch it at the second attempt.

After the interval, United resumed with Mark Reynolds coming on for Charlie Mulgrew and taking the captain’s armband from Butcher.

A terrific run by Pawlett took him past two defenders before it came to an abrupt end after being clattered by Ross Dunlop who became the third home player to be booked.

Ten minutes into the second period, the Fifers almost levelled courtesy of an uncharacteristic error by Benji Siegrist who was disposed by Sean Brown who found space to fire in a net-bound shot.

On 61 minutes, Courts made a triple substitution bringing on Kerr Smith for Ryan Edwards, Lawrence Shankland for Nicky Clark and Logan Chalmers for Harkes.

As the game entered the last quarter, both sides made further changes in personnel and for United Florent Hoti replaced Fuchs.

And immediately, Hoti was in the thick of the action finding Pawlett, but he over-elaborated and the chance was gone.

In the dying seconds, United almost doubled their lead. First a Hoti shot from a Shankland cut back was palmed over the bar by Gallacher and from the ensuing corner, Reynolds fired narrowly past.