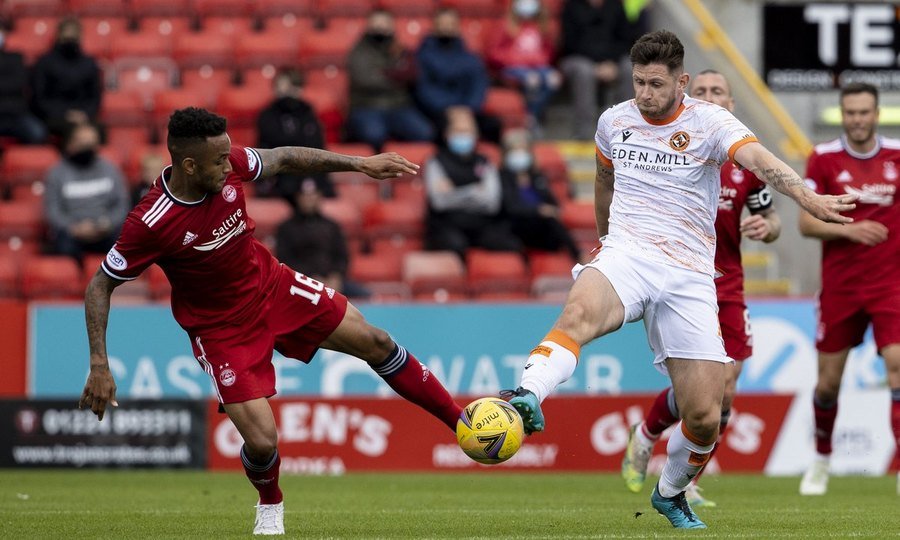 Tam Courts’s men failed to spark in the Silver City as the league resumed, going down by two goals to Aberdeen.

The build up to Dundee United’s opening game of the new season was defined by a contrast of change and continuity. A change was the 6305 Aberdeen fans, in social pods or individual bubbles, repopulating stands that stood so achingly empty through last season. There was change too in the dugout, with fresh-faced Tam Courts leading out the Terrors in the league for the first time. Continuity blended with change on the pitch. Courts and his staff were able to name a very familiar, Premiership-hardened starting XI, albeit one schooled in a brand-new style of play through the League Cup group stages.

The first half was defined by United coping with pressure and looking to create through pacy counterattacks.

Aberdeen had several opportunities from the set piece. The home side produced free kick and corner routines fresh from the pre-season training ground, targeting their big men and looking to strike on second balls. United’s tall backline were equal to all the early aerial threat. Edwards and new recruit Mulgrew in particular showed solidity under pressure.

The home side scored just before the half-hour mark. Fergusson clipped a long pass over the top, losing the flying figure of Jonny Hayes. The Irishman raced into acres of space, drove in on goal and clipped Siegrist. Furious shouts for offside from the United defence went ignored by the linesman.

The vocal support boosted Aberdeen, but the under-pressure Terrors did fashion chances. Liam Smith found space high on the right twice in quick succession, finding Our Academy Graduate Robson who kept it alive in the box. Neither chance could be converted into a shot on goal, however.

United grew into the game as the first half drew to a close. Their best opportunity to level things up came right on half time. It was Smith again crossing from the right for an onrushing Ian Harkes. The American got his head to the ball but could only glance wide.

The second half started badly for Courts’s charges. Aberdeen pressure continued, and on 51 minutes the second goal was scored. Young full-back Ramsay crossed from the right, and his ball was nodded past Benji.

Jeando Fuchs and Our Academy Graduate Logan Chalmers were brought on for Reynolds and Clark. This saw a formation alteration and injected creativity. A further Academy Graduate in the shape of Chris Mochrie was brought on after 80 minutes in an attempt to generate more chances from the midfield.

It was not to be United’s day, however. All three points remained in the Granite City.