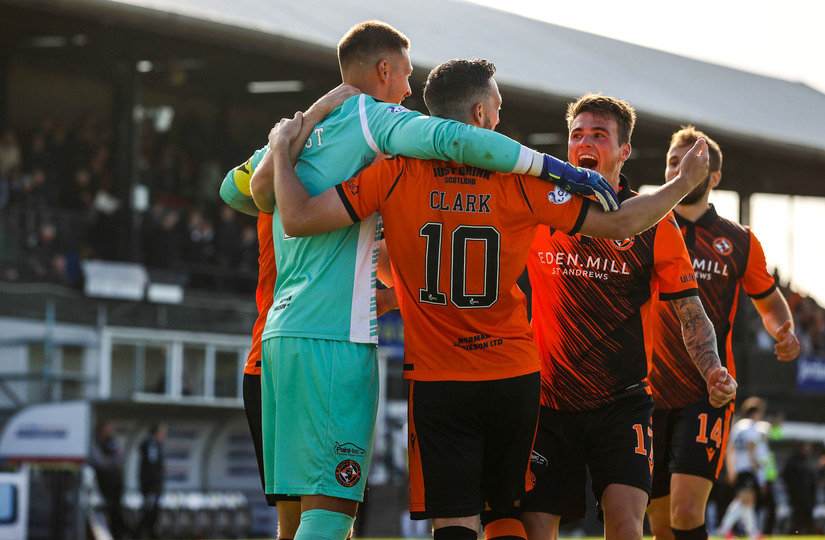 Nicky Clark and skipper for the day Benji Siegrist were the Tangerine’s heroes in earning their side a place in the Quarter-finals of the Premier Sports Cup.

Siegrist, handed the armband for the first time, pulled off a string of great saves to keep United in the game after falling behind and saved two in the penalty shoot-out.
Meanwhile Nicky Clark’s spot-kick success nine minutes from time was a lifeline after the home side looked to be heading for a surprise victory.A repeat dose from the sharp shooter in the shoot-out saw United through netting the clincher.

After Mark McNulty missed United’s first, Charlie Mulgrew, Peter Pawlett, and Jamie Robson all counted with Benji saving from Patrick Reading and Jonathan Afolabi to rescue a tie that for a long time looked as though the Club’s poor record at Somerset Park would continue.

Injuries dictated two changes to the side that so excelled in defeating Rangers last week.

Calum Butcher and Logan Chalmers, expected to miss several weeks, were the pair forced to drop out with Adrián Spörle and Our Academy Graduate Darren Watson their replacements, meaning the team that finished last week’s game started at Somerset Park.

For Watson it is his first start in the top team as his three previous appearances have all been as a substitute. Returning loanee striker Mark McNulty was on the bench to fill the gap left by the departed Lawrence Shankland.

In Butcher’s absence, Benji Siegrist took over the captain’s armband. United made a sprightly opening with Watson winning a first minute corner. Two minutes later, Spörle drilled in a 22-yarder as United started with greater intent.

Thereafter, goalmouth action was at a premium. Endeavour wasn’t called into question but both side lacked a cutting edge.

Before the break, Peter Pawlett was through on goal, but keeper Aidan McAdams advanced to block his run.

Six minutes into the second period, there was a real let off for United. From a Hewitt cross, Maxwell’s first timed shot was superbly saved by Benji before rearing up and over the bar.
And three minutes later Andy Murdoch fired wide from the edge of the box. Home pressure told on 55 minutes. Adeloyle burst through and came through two tackle before eventually forcing the ball over the line from inside the six-yard box. This was a distinctly sticky spell as Maxwell drew a save from Siegrist shortly afterwards.

Maxwell continued to cause problems with another run down the left but his shot was wayward
Patrick Reading was next to have go and only a finger-tip save by Benji prevent a damaging second goal.

Just prior to those last two close calls, McNulty entered the fray with Spörle making way. United finally wrestled off their defensive shackles when an Ian Harkes shot on the turn was deflected for a corner. However, skipper Siegrist led by example to keep his side in the game palming Maxwell’s snap-shot onto the bar and over!

United’s response came from Watson whose effort from distance bended wide of the goal.
On 79 minutes came the pivotal moment of this tie. Charlie Mulgrew returned the ball into the box following a corner. His fellow defender Ryan Edwards attermpted to get on the end of it but referee Nick Walsh ruled he had been impeded by Jack Baird and awarded a penalty before showing the Ayr defender a second yellow card thus reducing the hosts to ten men. The roar of relief by the Arabs behind the goal was palpable as Nicky Clark’s clinically struck the award low into the bottom corner.  With stoppage time looming, McNulty headed over from a good position, so it was onto extra-time.

A free-kick straight off the training ground almost broke the deadlock two minutes after the additional 30 minutes. Mulgrew’s reverse pass found Pawlett free on the right of the box and his cut-back fell to McNulty who could only angle his effort over the bar.
United’s Liam Smith was unlucky not to score against his old side when his pile-driver from 25-yards cannoned off a post. Against the ten men, United were very much on the front foot, McAdams tipping a Clark effort round the post.

United did have the ball in the net but Pawlett was clearly offside after collecting a Jeando Fuchs shot.
And Fuchs was booked shortly afterwards for a late challenge on Miller who had only just come on. Bringing on four subs in extra-time enabled Ayr to stem the tide. Nicky Clark’s knock down set up Jeando Fuchs with the last kick of the 120 minutes but his effort eased over the bar and it was on to penalties where our Swiss Stopper proved the hero alongside the ever reliant Clark.