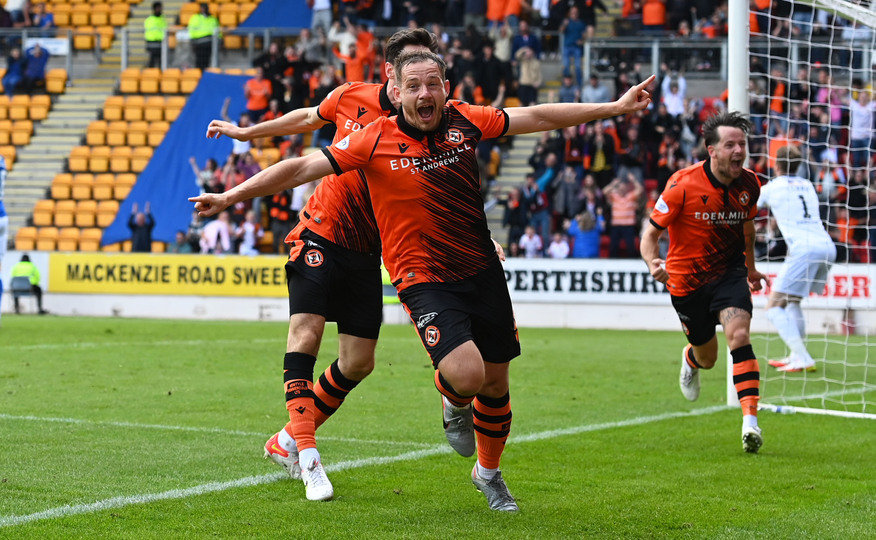 United visited Perth on a fine sunny afternoon supported by a 3000+ strong Tangerine Army and returned with a deserved victory following a marvellous team performance and a Peter Pawlett finish that epitomised the team togetherness ethic on display throughout.

United had Northern Irish Internationalist Trevor Carson between the sticks after regular number one Benji Siegrist picked up an injury in training – the full extent of that wont be known until early next week. He was joined in making his debut by loan signing Dylan Levitt who replaced the injured Ian Harkes. Marc McNulty made his first start in his latest loan spell with the Club as United looked to break a season of draws between the sides last season.

United started the game very well against the saints and dominated possession but it was the home team who had the first effort on goal with ex-United man Booth testing Carson’s gloves.

The response from the Terrors was immediate and lovely passing play ended with McNulty teeing up Clark who forced namesake Clark into a tip past the post in the ninth minute.

Two minutes later, great work by our Argentinian Adrian Sporle, rampaging down the left, created a headed opportunity for the lively McNulty but from ten yards the strikers effort was saved by Clark.

With 16 minutes on the clock it looked like United were certain to score as Pawlett’s free-kick found Edwards at the back post, from his knock down it fell invitingly for Mulgrew who smashed a shot goal wards only to be denied by a St Johnstone block a yard from goal.

After a sluggish start the hosts were slowly getting a hold on the rampant United and Rooney reminded us of his danger with a 35-yard fizzer that had Carson scampering across his goal as it slid by the upright.

The hosts were now enjoying a fruitful period and it was Rooney again who created an opportunity in 43 minutes as he burst free on the right despite the presence of two United defenders. Thankfully his cutback evaded everyone in the box and the chance was gone.

United came out for the second half playing at a tempo that the home team were struggling to cope with. In 51 minutes it was again Mulgrew who was presented with what looked like a great chance as he rose to meet a header from a corner but his glancing effort evaded the far post, much to the centre half’s disappointment.

The large and noisy United crowd behind the St Johnstone goal were really becoming a major factor in the game with their non-stop support and backing and they were rewarded in the 61st minute as United got the goal their performance deserved. Hunting in packs they forced a turnover yards outside the St Johnstone box and when the ball was fed into Clark inside the area, his awareness to spot Pawlett opened up a window of opportunity and the attacking midfielder grabbed it with distinction. He touched the ball beyond the defence and poked it home – to start wild celebrations within the stands and on the pitch. Referee Don Robertson decided that Pawlett’s celebration was enough to merit a yellow card – a decision that would come back to haunt United later.

As the excitement of the opening goal died down the match took on a niggly feel as the home side tried to battle back into things. United were dominant all over the park however with the central midfield pairing of Fuchs and on-loan debutant Levitt outplaying the St Johnstone three on many occasions, United continued to dictate proceedings.

After a period of stop-start broken play punctuated by cards, the game took a potentially decisive swing in 78 minutes as Referee Don Robertson decided Peter Pawlett was guilty of simulation despite what looked like a clear clip of his ankle by Saint’s Murray Davidson. A second yellow saw the United man dismissed. However, any idea that the home team had that this would be the catalyst for a comeback were sadly mistaken as United’s ten men marshalled their way through the final 17 minutes with aplomb.

While every single player played their part, the final period challenged by the dismissal allowed Trevor Carson the platform to show how good a stopper he is – with one save in particular almost defying the laws of physics as he throw his left arm up to stop a deflected effort that was heading in.

The reality is that anything other than three points would have been unjust for this United performance that will have sent the Tangerine Army home happy and dreaming of what could be this season.

After the game, Head Coach Thomas Courts dedicated the performance and victory to Benji Siegrist after his injury in training.