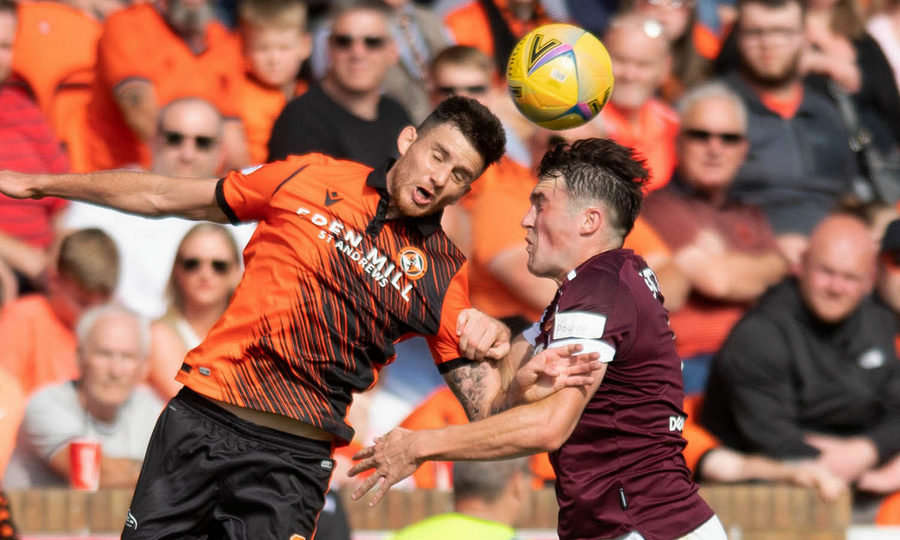 United welcomed Heart of Midlothian to Tannadice for the second home fixture of the 2021/22 cinch Premiership campaign and, in the first match without strict COVID-19 restrictions in more than 17 months, the 9,324 fans packed into the stands were a welcome sight.

It was also a return to Tayside for a few familiar faces, with Robbie Neilson, Lee McCulloch, Gordon Forrest and John Souttar all back at Tannadice for the first time since their respective departures, as well as Gary Mackay-Steven. Tam Courts made just one enforced change to the side, the suspended Pawlett replaced by Our Academy Graduate Chris Mochrie on the right of midfield. United lined up in a 4-4-2 identical to the one utilised at McDiarmid last Sunday and shifted to a 5-3-2 when out of possession as Spörle tucked into the defence.

The visitors started strongly, and the well-known threat of Mackay-Steven almost created the opener, delivering the ball across the box to Liam Boyce who failed to settle the ball adequately to strike. Despite the relentless waves of maroon attacks, the United backline stood strong and marshalled the Hearts forwards admirably.

The first clear-cut chance of the 90 came just after the half-hour mark. A short corner found its way to Michael Smith who stood the ball up to the back post towards a cluster of tangerine and maroon bodies. Halkett rose highest to knock down for Souttar, the ex-United man side-footing the ball high into the Eddie Thompson under intense pressure from Mulgrew.

The Eddie Thompson Stand was the recipient of another Hearts effort on goal, this time Peter Haring slicing the ball over the bar from 30 yards after being teed up by Boyce.

United’s best opportunity of the first half came six minutes before the break. A long throw in behind Souttar found Clark wide on the left. Clark played an elongated one-two with Mochrie before flicking the ball beyond Halkett into the path of Robson. The full-back found himself with space on the angle and blasted the ball straight at Craig Gordon who stood strong to palm the ball into the air. Spörle’s weak follow-up was easily gathered by the Scotland international.

Souttar was again, uncharacteristically, involved at the other end, sending a whipped cross over the head of Mulgrew to Haring in the United area, the midfielder narrowly glancing wide from eight yards.

The home side were dealt a cruel blow on the stroke of half time as they fell behind. Mackay-Steven and Edwards tussled for a loose ball before the former broke free and went down under the contact of Edwards just inside the box, Greg Aitken instantly pointing to the spot. Boyce struck the penalty low to the left-hand side, Trevor Carson springing across to deny his fellow countrymen, however, the rebound fell kindly to Boyce who rolled into the empty net to cut the Arabs’ celebrations short and give Hearts the lead.

After the break, United went in search of an equaliser, harrying their opponents high up the park. McNulty dispossessed Halkett by the corner flag and his cross was cleared only as far as Dylan Levitt, the Man United loanee’s shot too tame to trouble Gordon between the sticks. Tam Courts looked to the bench for the spark that would ignite his side’s fightback, introducing Ian Harkes and Calum Butcher who returned from injury. This also resulted in a formation shift for United, Butcher dropping between the centre-halfs in possession to try and construct attacking moves from deep, allowing Smith and Robson to bomb on to give width.

Hearts retaliated to the United pressure, a substitute of their own, Josh Ginnelly, tormenting Robson in the right channel before firing a wayward effort high and wide from the corner of the box. The winger went close again soon after, this time heading for the bye-line and thumping a menacing cross into the pack which was expertly dealt with by Carson.

United began to turn the screw as time ran out and but for a spectacular save by Gordon would have found themselves level. A fabulous corner from Harkes was bulleted goalward by Edwards from point-blank range, Gordon somehow managing to divert the ball over his crossbar. Harkes then had an effort of his own from 30 yards after McNulty found him with a knock down, Hearts’ stopper denying the American low to his right.

Chances were flowing now for the hosts, this time Butcher trying his luck after a fluid passing move to release him on the edge of the area, Gordon equal to the strike once again. A Zidane-esque turn from Chris Mochrie saw him with time and space to drive at the Hearts rear-guard, but the 18-year-old was cynically scythed down by Beni Baningime, producing the second caution for the away side. From the resulting free-kick, Mulgrew struck a venomous shot that looked destined for the postage stamp, Gordon heroically tipping the ball round the post for another United corner as the tangerine waves continued.

Despite the flurry of opportunities for the Terrors to equalise, Hearts delivered the knockout blow with less than a minute to play. Ginnelly pickpocketed Mochrie on the left side of the box, before driving at Robson and picking out Armand Gnanduillet who slid the ball beyond Carson to double the visitors' lead and spark joyous scenes amongst the large away support.

This proved to be the last action of the match despite a large chunk of injury time, as United suffered their first home defeat of the 2021/22 season.