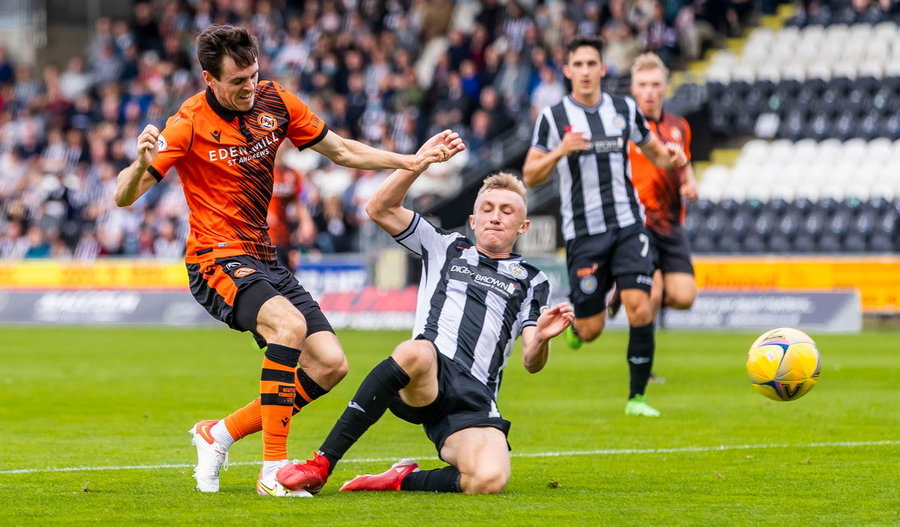 United travelled to St Mirren Park looking to bounce back from the disappointing defeat at the hands of Heart of Midlothian before the two-week international break.

The Buddies have made a stuttering start to their 2021/22 cinch Premiership campaign and are yet to win in at home – a goalless draw against St Johnstone and eventful 2-2 draw at Dens the only points the Paisley side have picked up so far.

United came into the game buoyed by the news that Ilmari Niskanen’s work permit was granted by the UK Home Office a mere 24 hours before the game.

The Finland international was one of five changes made to the team that began at Tannadice at the end of August, along with fellow new boy Scott McMann who replaced Nicky Clark and the departed Jamie Robson respectively. Further changes saw Calum Butcher, Peter Pawlett and Ian Harkes introduced for Adrian Sporle, Dylan Levitt and Academy Graduate Chris Mochrie. Tam Courts decided to opt for a different system to the one deployed against the Jambos, 4-3-3 used today rather than 4-4-2. Peter Pawlett was allowed a free role to roam and create going forward, the midfielder deciding to drift to the left in search of space.

The first chance of the match fell the way of United after just 60 seconds, as Pawlett raced beyond the hosts’ rear-guard before chopping back to look for support. The support came from Niskanen who received at the corner of the box before going for goal, his shot wayward and behind for a goal kick.

Pawlett and Niskanen again combined for a tangerine opportunity soon after, the former finding space to cross towards the back post for the Finn who just ran in too far as the ball drifted narrowly behind him.

St Mirren looked to create from the wide areas, delivering multiple crosses into the United area from both sides which were dealt with expertly by both Ryan Edwards and Trevor Carson on numerous occasions.

The referee produced the first caution of the game on the 20th minute, as Curtis Main entered the book for a nasty challenge on Charlie Mulgrew after the United man’s clearance.

United found more joy down the left as Pawlett carried the ball more than 40 yards towards the Buddies’ area and found Harkes standing in splendid isolation just to the right of the penalty spot. The American had just enough time to toe-poke his effort beyond Alnwick, but the covering Shaughnessy on the line managed to nod the ball behind for a corner, yet another chance going begging for Tam Courts’s men.

The visitors’ best chance of the opening 45 fell to Pawlett, after he played a fantastic one-two with Marc McNulty to open space on the edge of the box, however the midfielder overcooked his shot and blazed it high and wide into the south stand, much to the relief of Jack Alnwick in the St Mirren net.

Courts was forced into a change on the stroke of half time after Liam Smith and Dylan Reid contested for a 50/50 just inside the area, Levitt entering the fray for his first appearance since heading off on international duty for Wales. This led to Harkes dropping into the defence as a makeshift right back, with Levitt deployed as a deep-lying playmaker alongside Butcher.

The second half started slowly as both sides pressed intensely from the front, forcing each other into a Route One style of football. A St Mirren half-chance fell to Jamie McGrath 10 minutes after the restart, his shot from 20 yards drifting harmlessly wide of Carson’s post.

On the hour mark, the hosts had the ball in the net, Brophy slamming home from close range leaving Carson with no chance. However, the goal was fairly ruled out after the referee spotted Curtis Main clambering on Mulgrew in order to knock down for his strike partner, a let-off and wake-up call for United who were yet to get going after the break.

The away side’s first tactical sub heralded the eagerly awaited return from injury of Academy Graduate Louis Appéré, and this change seemed to spark United into life. Appéré was immediately involved, peeling off to the left and being fed by McNulty. The 22-year-old shifted the ball onto his left foot as he drove towards goal and forced Alnwick into action, the St Mirren stopper pushing the ball beyond the post for a corner.

Butcher thundered into a trademark challenge inside the centre-circle, with the ball breaking kindly Scotland international McNulty. He raced towards goal, supported by Butcher to his left, but opted to shoot rather than square it and, under pressure from both McCarthy and Alnwick, steered the ball wide to spurn United’s most clear-cut opportunity of the afternoon.

Carson became the hero for United as the clock ticked towards the 90th minute, producing a stunning save to thwart Richard Tait. Tait’s effort from point-blank range looked destined for the postage stamp before Carson sprung to his left to paw the ball over the bar and keep the score level.

A fair result at the SMiSA stadium in an end to end affair as United remain in 7th place ahead of next week’s hotly anticipated Dundee Derby.