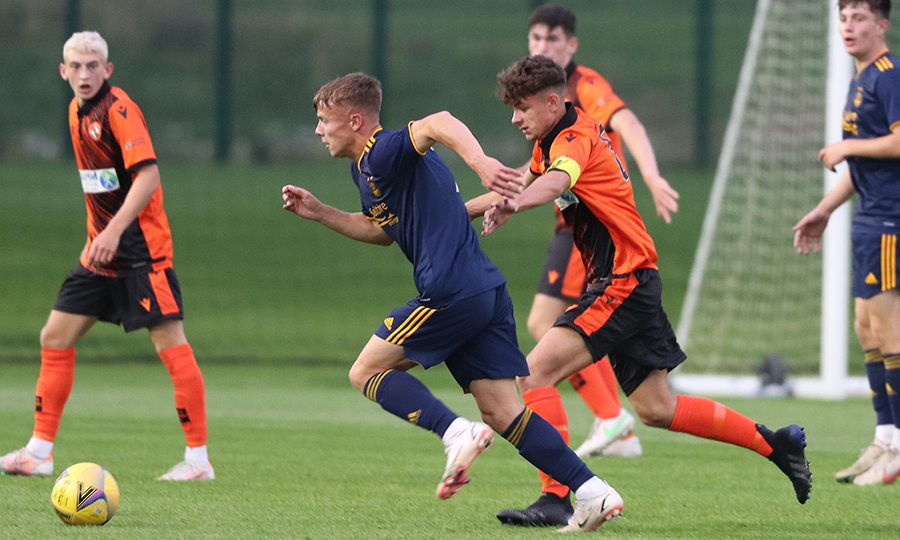 The Young Terrors took the road north to Aberdeen's Cormack Park facility looking to extend the fabulous start they have made to their league campaign with four wins out of four so far. They were up against an Aberdeen team that has also had a good start so this one promised to be a cracker - and so it proved.

United came back down the road with a point after being denied all three by a late equaliser for the hosts after Stuart Heenan's early second half opener. In truth, in a game that saw the dominance sway from side-to-side throughout, it was a fair result in the end.

The Young Terrors started the game well and created several early opportunities in the early stages with only a fine block by Murray denying Miller Thomson an opening goal. Minutes later it was Stuart Heenan who was denied - this time by a fine save from Dons keeper Oluyemi.

And it was United who started on the front foot with full back Miller Thomson denied in the 6th minute by a fine block from Finlay Murray after finding himself in space for a shot at goal. United again threatened in the 15th minute with Thomson driving an effort just wide of the goal as the Tangerines threatened to overrun the hosts.

Aberdeen responded in fashion with a period of dominance through the middle section of the first half that culminated in a tricky driving run by Duncan through the United defence ending with his effort hitting the side netting. The same player then saw a powerful effort from 18 yards well saved by Adams in the United goal.

As half time arrived, both teams will have went off content with performances and probably feeling as if the game deserved goals.

The Young Terrors started the second half off in determined fashion and it was the explosive Heenan who again asked the question of the Aberdeen rearguard but he found Oluyemi once again his equal.

Both teams continued to play attractive football in pursuit of an opener and it was the Young Terrors who grabbed a deserved goal on the hour mark after fabulous driving running from Rory Macleod set up Stuart Heenan to beat the goalkeeper from ten yards.

This was the catalyst for a period of superiority for the Young Terrors and only a fine goal line clearance prevented United grabbing a second after a six-yard box stramash.

The game continued to flow from end-to-end and as United pushed forward in pursuit of the decisive second goal, they were dealt a blow as the young Dons scored an excellent worked equaliser with little over four minutes remaining.

The powerful and energetic Duncan burst away in midfield and after an interchange on the edge of the box he slid the ball past Adam for their opener.

This proved a further ignition to the tempo of the game and the final few minutes were frantic as both teams looked for a winner. There was genuine respect shared around as the referee blew the final whistle to bring the game to an end what had been a great advert for Academy football in Scotland. With 19 of the 25 players who took part being 17 years of age or under and no little skill on display, both camps will have went home content from this one.