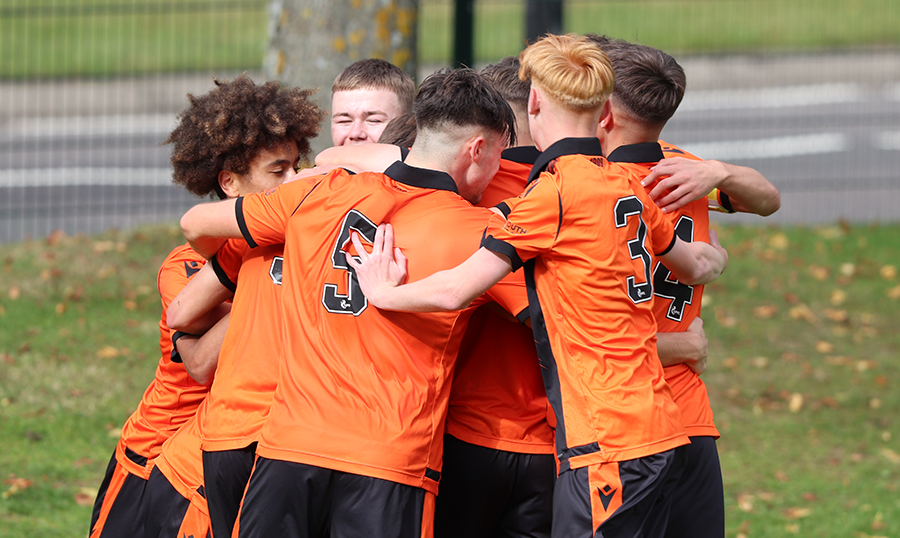 It was a quick turnaround for the Young Terrors as they crossed the Forth Road Bridge to face Heart of Midlothian at Oriam looking to get back to winning ways in the CAS Under-18s Elite League.

Ryan Moon made just one change to the side that drew with Aberdeen on Tuesday night, Leyton Bisland taking the injured Jacob Comerford’s place in the centre of the back four. A slight variation on the 4-3-3 was the system the gaffer opted for, the usual pivot of Craig Moore and Lewis O’Donnell behind Rory MacLeod in the number ten role, with Bryan Mwangi and Stuart Heenan either side of Naglik as the three-pronged attack. The Jambos, under the instruction of ex-United midfielder John Rankin, shifted between a 4-4-2 and 5-3-2 depending on which phase of play the game found itself in.

The first opportunity fell the way of the hosts as Callum Hambrook picked out Makenzie Kirk just behind the penalty spot, the 17-year-old’s well struck effort blocked fabulously by the well placed Bisland.

United’s heavy pressure almost forced the opener. Rory MacLeod charged down Hearts keeper Liam McFarlane and stole the ball, Adam Forrester spared his colleagues blushes by shepherding the loose touch out for a goal kick, much to the relief of the sheepish looking McFarlane.

Rhuairidh Adams was called into action at the halfway point of the first half after a lapse in concentration from Moore allowed his fellow number eight, Harry Gordon, to pinch the ball from him as United looked to build from the back. Gordon drove towards the box before being closed down rapidly by Adams who snuffed out the danger.

Hearts threatened again, twice through Callum Sandilands who found himself one-on-one but fluffed his lines by dinking narrowly wide of the left post under pressure from Adams, and then headed over after Hambrook landed a vicious cross on the striker’s head.

After standing strong in the face of continuous waves of maroon attacks, the Young Terrors took the lead against the run of play on the stroke of half time. MacLeod found space to deliver a clipped cross to the imposing figure of Naglik who struck a right-footed volley into the net via a deflection off the post.

An all action second period began in the worst possible fashion for United. Makenzie Kirk rolled the ball to Macaulay Tait on the edge of the area before the midfielder rattled a venomous strike into the bottom left corner which left the despairing Adams helpless.

Despite this early setback, the Young Terrors showed admirable resilience and hit back with a thunderous effort themselves. Adams’ long howitzer downfield was missed by Naglik who challenged with Flatman in an aerial duel, and the ball ran through for Heenan to hammer the ball into the near post from 17-yards and reinstate the tangerine lead.

Just two minutes later, Heenan found himself on the scoresheet again. Moore burst forward from deep and created a three on two scenario. Showing impeccable decision making, the midfielder rolled the ball right for Heenan who drilled across McFarlane on the angle to net his third goal in two games and give the Young Terrors a two-goal cushion.

Not content with his brace, the mercurial Heenan went in search of his hat-trick and had a couple of chances to do so. Naglik showed his aerial prowess to outjump Flatman and flick the ball through for the winger, this time McFarlane getting the better of Heenan by pushing his well-struck effort over the bar. Miller Thompson fed Heenan again as the two tangerine shirts doubled up on Forrester, a loose touch from the latter allowing McFarlane to smother the ball.

Substitute Reece Kerrigan made a positive impact off the bench after entering the fray with around 20 minutes to play. MacLeod curled an inviting ball in from deep which the diminutive Kerrigan managed to beat the keeper to and glanced just wide. Kerrigan and MacLeod combined once more, this time Kerrigan was the provider as his cross dropped to the attacking midfielder on the 18-yard line, but he snatched at the chance and fired high and wide over the bar. Kerrigan wouldn’t be denied his assist though, his mazy run was ended clumsily by Flatman resulting in a United penalty. MacLeod stepped up to take and converted convincingly, closing his foot on the ball to wrap in into the corner and secure the three points for the Young Terrors.

There was still time for a Hearts consolation though, a cross from the left dropped favourably for Max Williamson to prod the ball home from extremely close range.