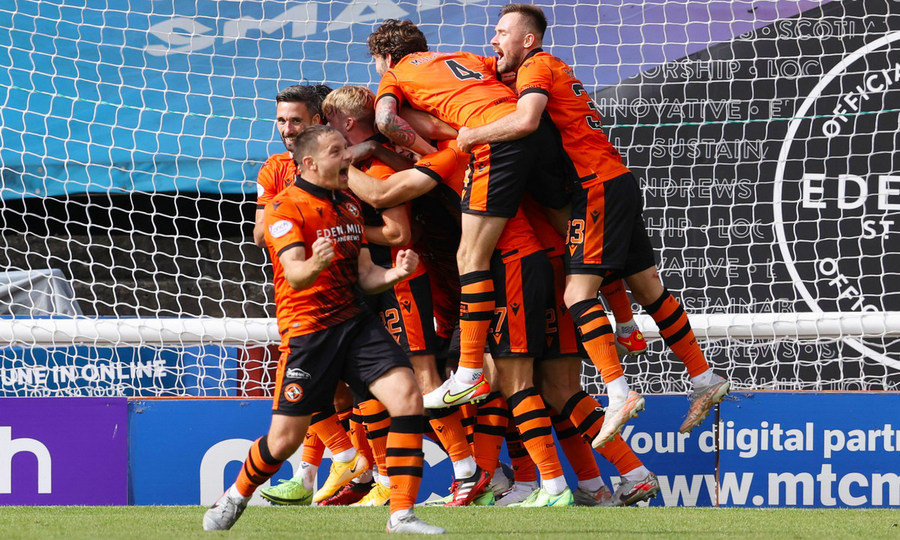 James McPake’s Dundee crossed Tannadice Street to take on United in the first Premiership derby in more than five years, looking to obtain their first victory at Tannadice since 15th August 2004.

The last meeting between the sides resulted in an entertaining 1-1 draw just after Christmas 2019, Nicky Clark’s 7th goal of the season putting United ahead inside the first five minutes before being pegged back by the left foot of Graham Dorrans after the interval. However, this disappointing result still maintained the 17-point gap Neilson’s men had over their city rivals. The history of the fixture stretches back to 1914, when the first Dundee derby was contested at Tannadice in aid of the Prince of Wales’ relief fund, the match concluding 1-1 after Millar cancelled out his namesake’s early strike for the visitors. In the 107 years that have passed since, there have been 183 competitive Dundee derbies, of which United have won 83, drawn 45 and been defeated in 55. 59 brave players have crossed the divide and pulled on both the tangerine of United and the dark blue of Dundee, as well as the late, great Jim McLean who swapped dugouts in 1971. McLean was the subject of a minute’s applause prior to kick-off, as both sets of supporters united to honour the life of a Scottish football legend on the day after his statue was unveiled outside the Eddie Thompson stand. Like last week’s opponents St Mirren, the Dees headed into the match winless in the league, with three draws from their opening five fixtures.

Tam Courts made two changes to the side that contested last week’s stalemate in Paisley with the surprise inclusion of Kerr Smith replacing his injured namesake, Liam, as well as the eagerly anticipated return of Benji Siegrist between the sticks.

Cammy Kerr tried his luck inside the first minute from distance after impressive footwork from Shaun Byrne just outside the United box, the defender slicing his shot into the packed Shed. United hit back with a wayward effort of their own less than 30 seconds later, Marc McNulty nodding a clipped ball from Calum Butcher down to Peter Pawlett who blasted over from 25 yards.

United were given a reminder of the threat Leigh Griffiths posed as the former Celtic man had two chances in the early stages to put the visitors in front. The first saw Griffiths glance a teasing Jordan Marshall delivery narrowly wide of the upright, before the two combined again with Marshall picking out the striker, this time at the near post, with Griffiths’s left-foot half-volley forcing Siegrist into his first save since his decisive penalty stop at Somerset Park in August.

It was a fiery start to the contest, referee John Beaton whistling for a foul nine times in the opening 20 minutes. However, Beaton opted not to penalise a handball in the area by Kerr after McNulty controlled a searching Mulgrew pass from deep.

A couple of half-chances for the hosts followed, a venomous McNulty strike on the angle blocked by Ryan Sweeney, before McNulty was again involved as he sneaked into the back post and just failed to connect with Pawlett’s low cross.

Pawlett went close for United as the match began to settle down just after the half-hour mark, driving the ball off the post after buying time and space to shoot thanks to neat interplay with Ian Harkes.

Butcher was, predictably, the recipient of the first United caution of the afternoon after scything down Ashcroft on the halfway line on the stroke of half-time.

There was still time for more action before the break, Charlie Mulgrew trying an ambitious free-kick from 35 yards which whistled just past Adam Legzdins’s post

United stamped their authority on the match soon after the interval, enjoying more and more possession as the dark blue shirts retreated deeper, and found joy wide on the left through impressive combinations between Jeando Fuchs, Scott McMann and Pawlett. This trio worked space for Pawlett to cut back to Harkes, but the American’s loose touch allowed the Dundee defence to close in and snuff out the danger.

Substitute Levitt was instrumental in United’s increased grasp on proceedings, dropping deep to collect off the centre-half’s before picking penetrative, line-breaking passes to teammates in progressive positions.

Marc McNulty twisted and turned away from a dazed Marshall to strike but his weak effort failed to trouble Legzdins in the Dundee net.

Dundee retaliated to the increased heat from their city rivals and should have taken the lead on the 71st minute. Byrne showed composure to execute a turn inside McMann to open space for the shot from 16 yards. His effort looked destined for the corner but a heroic intervention from Ryan Edwards denied the 28-year-old, as the defender threw himself in front of Siegrist to block. The loose ball fell to Griffiths and, with the goal at his mercy, he blasted into the Eddie Thompson stand from all of seven yards. A real let-off for United.

United’s dominance would eventually tell as Ian Harkes opened the scoring with just ten minutes to go. Nicky Clark and Pawlett attempted a one-two under intense pressure from the Dundee rear-guard and found themselves crowded out. The ball sat up perfectly for the American who skipped beyond the challenge of Byrne before dispatching the ball into the near post via a touch off Legzdins’s glove to spark wild celebrations amongst the sea of tangerine which packed the stands of Tannadice.

Dundee substitute Cillian Sheridan was on the end of their best two chances to take a point back across the road. A stramash from a corner dropped to Sheridan who struck towards the corner, Edwards again the hero for United as he cleared off the line. The former Kilmarnock man then burst through one-on-one with Siegrist but took too long to pull the trigger and Mulgrew managed to intervene just in time.

After four minutes of injury time and much shredding of nerves, Beaton’s whistle sounded to continue United’s incredible unbeaten record in home derbies and push Courts’s men up to 5th in the cinch Premiership table. A deserved victory for the fantastic, vocal Arab support inside a sold-out Tannadice.