WOMEN TOP OF THE LEAGUE 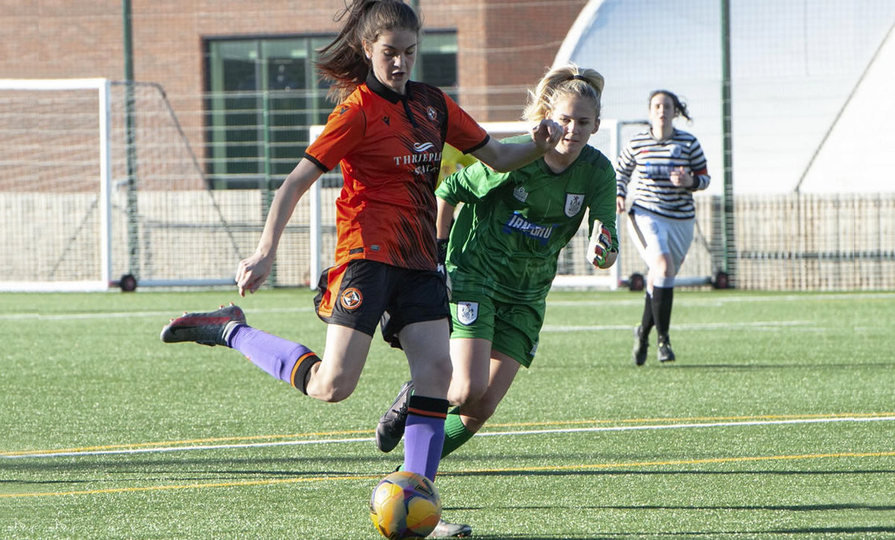 Having played a game more than their closest rivals, Dundee United are now sole leaders in the Scottish Women’s Premier League Two following a 3-1 win over Queen’s Park on Sunday.

A first half double from summer signing Rachel Todd saw United cruising and despite Mhairi Fyfe pulling a goal back, sub Alex Robson sealed the points late on.

Graeme Hart was without three key players as Robyn Smith, Danni McGinley and Tammy Harkin were all unavailable with Neve Guthrie, Steffi Simson and Erin Cattanach all coming in.

The start of the game was delayed for 30 minutes as the referee requested a change of socks from United, but it didn’t put the brakes on the side once the game kicked off.

Neve Guthrie struck low at Rachel Caddell after just three minutes but four minutes later the deadlock was broken. After starting off with Meach, the ball moved forwards and Laurie Ross’S cross into the box was too high for anyone but it was collected by Rebecca Foote and her cut back was slotted home at the near post by Rachel Todd.

Queen’s Park almost grabbed an equaliser in the fourteenth minute as Kinga Koronkiewicz saw her freekick hit the crossbar.

United’s lead was doubled after twenty minutes and it was Todd who was on the scoresheet again; the ball starting off with Aaliyah-Jay Meach before moving to Erin Cattanach and Erin Ross with the latter playing a fantastic long range pass for Todd to run onto before stabbing past the oncoming Caddell.

Laurie Ross could have added a third three minutes later when Cattanach delivered an inch perfect cross but the striker couldn’t divert her header on target.

As the game inched towards half time, two of the other summer signings attempted to get on the scoresheet from afar as Cassie Cowper and Cattanach couldn’t find a way past Caddell.

Megan Burns and Steffi Simson failed to get a shot on target in the early stages of the second half with Demi Potts at the other end forcing a save out of Meach.

Simson almost extended the lead further in the 52nd minute when she was presented with the opportunity inside the box but Caddell did well to deny her.

The visitors started to look like the better side in the second period with Koronkiewicz again coming close with a free kick.

Despite the game being close, there was very little to write about for a prolonged period. With five minutes remaining Clara Laing became just the second Academy graduate as she made her debut replacing Neve Guthrie.

Less than sixty seconds later United sealed the points and it was a second senior goal for sub Alex Robson as she collected a through ball before easily rounding Caddell and tapping into an empty net.

The result means that United become sole league leaders, albeit due to Glasgow and Boroughmuir Thistle being out of action. Graeme Hart’s side travel to New Tinto Park this coming Sunday to face the former.