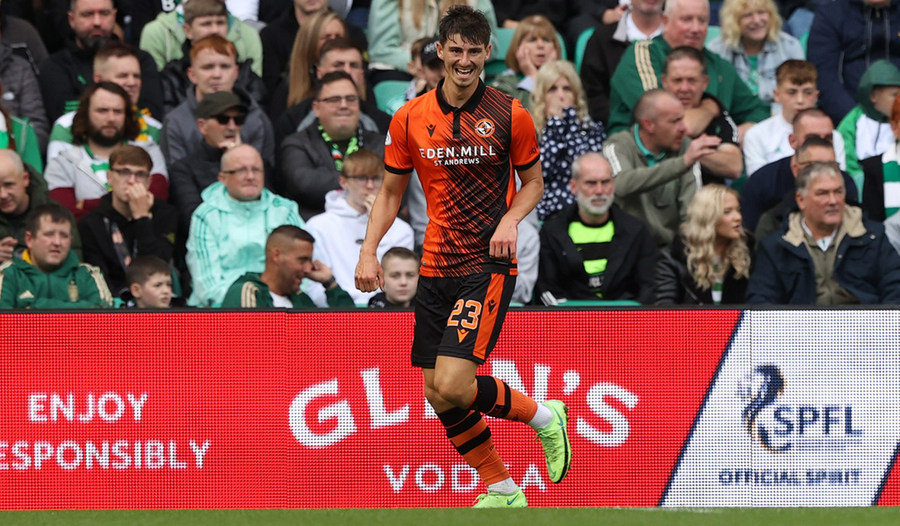 Celtic Park was the venue for United’s third game in seven days as a gruelling week comes to an end for Tam Courts’s side. Our last win in the East End came on Boxing Day 1992 when Duncan Ferguson’s goal on the stroke of half-time secured victory over Arsenal legend Liam Brady’s Hoops.

Surprisingly, United came into the game above Celtic in the table, one point better off than their opponents who have made a stuttering start to life under new boss Ange Postecoglou having lost 50% of their opening six fixtures.

The gaffer made three alterations to the side which exited the Premier Sports Cup on Thursday evening, Benji Siegrist the only non-enforced change as Charlie Mulgrew and Marc McNulty dropped out due to injury, that pair replaced by 16-year-old Kerr Smith and Ilmari Niskanen respectively.

The match began in frantic fashion as play bounced between both goals, Celtic finding joy on the counter through their centre-midfielders drifting into the wide areas as United, unexpectedly, were allowed possession deep inside the hosts’ half. Celtic almost capitalised on a break-away when Anthony Ralston managed to squirm his way past Kieran Freeman to deliver a cross onto the head of Albian Ajeti, the Swiss thumping his header high over the bar from six yards.

United’s sightings of goal started to flow after just ten minutes, first, a Freeman cross narrowly evaded Nicky Clark at the front post before Clark went close again by capitalising on an undercooked back-pass from James McCarthy. Unfortunately Joe Hart closed in to snuff out the danger. At the other end a heroic piece of defending from Smith kept the score level as he blocked Tom Rogic’s goal-bound effort inches from his own goal-line.

Despite United controlling proceedings, it was the Hoops who took the lead after 16 minutes. Celtic summer signing Jota curled in an inviting delivery to the back stick for Liel Abada to guide home unchallenged from close range after running past Scott McMann’s blindside.

However, it took the Terrors just 120 seconds to hit back with a header of their own, and it was that man again Ian Harkes. Niskanen wriggled away from Ralston on the left-side, leaving the former United man in a heap, and thumped a fabulous ball across the near post which met the head of the American and flew into the corner, leaving England international Hart with no chance to give Courts’s men a deserved equaliser.

The action continued instantly after the restart, and Celtic should have re-taken their lead through Ajeti, who diverted Abada’s cross into the upper tier with the goal at his mercy.

Claims for a penalty were, unbelievably, waived away by referee Kevin Clancy after more lackadaisical defending from Celtic. Peter Pawlett pickpocketed Karl Starfelt and the loose ball found its way to Clark who burst beyond Cameron Carter-Vickers before being clumsily bundled over just before he pulled the trigger.

Benji Siegrist began to be more involved at the half-hour mark, comfortably saving strikes from Jota and David Turnbull low to his right.

Crosses were the main source of danger for Postecoglou’s side, frequently finding space in the channels to tease low balls across the face of goal. Ryan Edwards again proved his worth to the side as he somehow diverted a Jota one away from harm from underneath his own crossbar.

On the stroke of half-time, Celtic had the ball in the net, but the linesman’s flag cut the celebrations inside Parkhead short. Turnbull found space between the lines to turn away from the tenacious Jeando Fuchs, before crashing a shot off the bar from distance. The rebound dropped to Abada who turned home, linesman Frank Connor deciding the winger had strayed just offside as the initial strike was delivered. This proved to be the last action of note in an enthralling opening 45 minutes in Glasgow.

The home side came out in the second half with the intent of getting an early goal to put United on the backfoot and went close through Abada who dinked over from the right side of the box after a marauding run from Rogic opened space for the Israeli. United got a flashback to the danger Ralston posed when he donned the tangerine of United when he flashed an inviting ball across the six-yard line, no takers in the middle for the Hoops.

Niskanen went close to netting his first goal for the Club after breezing past Ralston and bending a right-footed shot inches past the far post.

United’s mentality started to shift from controlling possession to soaking up Celtic’s incessant pressure and springing dangerous counter-attacks through the outstanding midfield quadrant of Levitt, Harkes, Fuchs and Pawlett.

The tangerine shirts also weren’t afraid to test the keeper from distance, Pawlett and substitute Adrian Spörle warming the gloves of Hart just after the hour-mark.

Abada and Ajeti combined once more as the former found the latter in the mixer, the ball just too high and powerful for the striker to divert his effort on target as Celtic began to press for a winner.

Jota was perhaps the recipient of Celtic’s best chance to keep all three points in Glasgow, controlling a Ralston pass on his chest before blasting over the bar under pressure from Freeman. Soon after, a penalty box pinball led to the ball cannoning off the head of Tom Rogic onto the bar with frustration in the stands building.

Arabs got a reminder of the quality Louis Appéré possesses when he carried the ball 50 yards into the Celtic box, skipping beyond two challenges in the process, and forcing Hart to save his angled shot which was destined for the corner.

There was still time for Celtic to hit the woodwork one more time before the match concluded, this time Jota curling the ball off the bar as the green and white shirts began to resign to the fact it just wasn’t going to be their day.

Much to the relief of all United fans, Clancy brought the 90 to a close after four minutes of additional time to secure our first point at Parkhead since current United man Mulgrew’s 90th minute header cancelled out Stuart Armstrong’s first-half strike in November 2013.

We now sit three points behind 4th placed Motherwell in the Europa Conference League spot, and five points behind Steven Gerrard’s Rangers at the summit. Next up, we welcome Ross County to Tannadice six days from now.