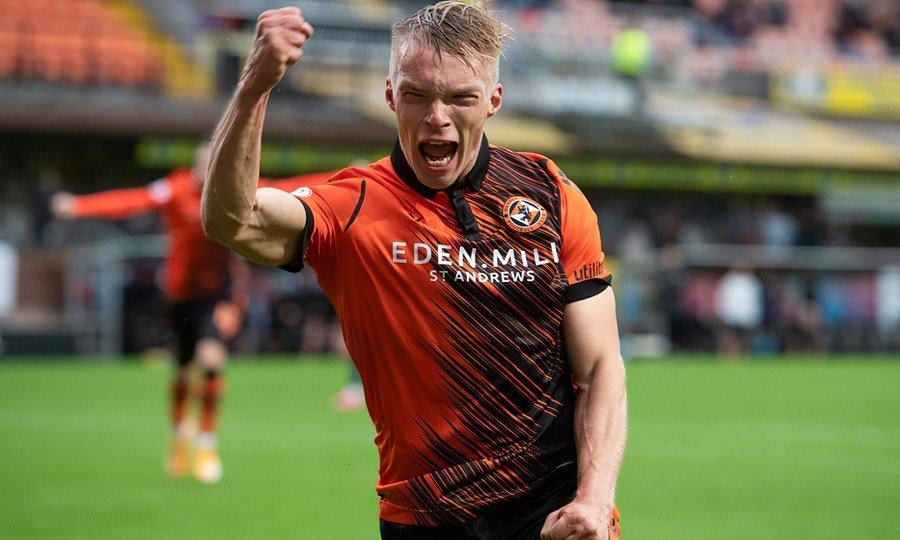 For the final game before the upcoming international break, United welcomed Malky Mackay’s Ross County to Tannadice in the hope of consolidating their place in the top six with a third home victory of the season.

The Terrors have proved somewhat of a bogey team for the Staggies in recent years, losing only one of the last seven matches between the sides, conceding a mere three goals in the process.

Only one change was made to the side that ground out the well-earned Parkhead point last Sunday, Tam Courts opting for experience over youth as 35-year-old Charlie Mulgrew replaced 16-year-old Kerr Smith in the centre of the back four.

Ahead of the defence was the same three-man midfield and attack which wreaked havoc against Celtic, United shifting into a 3-4-3 when trying to break through County’s negative set-up, as Welsh international Dylan Levitt dropped between the defence to create from deep. His fellow midfielder would split into wide areas and allow wingers Peter Pawlett and Ilmari Niskanen to invert into the half-spaces.

United came out all guns blazing from the off and pinned the Staggies into their own half with a high intensity press and high defensive line which forced them to play a Route One style of football. When in possession, the hosts employed quick passing and incisive movement to create space to construct free flowing attacking moves. Left-back Scott McMann was heavily involved in the early stages, forcing a corner with a powerful run which Nicky Clark glanced just over the bar before his glorious delivery from deep somehow evaded the onrushing Clark and Niskanen on the six-yard line.

Levitt caught the eye of the footballing world with his outstanding showing in Glasgow last weekend and almost netted his first goal since making the loan switch from Manchester United, driving a low shot inches wide of the post after evading the challenge of Iacovitti.

At the other end, a goalmouth scramble called Benji Siegrist into action for the first time of the afternoon, smothering Joeseph Hungbo’s close-range effort just outside his six-yard box. The ball eventually fell the way of former United man Blair Spittal to bend an in-swinging cross on top of Siegrist who pawed the ball away from danger expertly.

Finland international Niskanen looked in the mood under the Tannadice floodlights, seeking to build on his fine form of late. The winger had a venomous effort saved after 14 minutes as Ian Harkes played him through one-on-one with County stopper Ashley Maynard-Brewer, but this didn’t dishearten Niskanen, and he opened his Tannadice account just after the half-hour mark. Clark pounced on a loose defensive header from Jack Burroughs and picked out Niskanen who made a piercing run into the area off the back of Baldwin. The Finn took a touch to steady himself before rifling the ball through Maynard-Brewer to ignite passionate celebrations both on the park and in the stands.

United’s pressure continued and another Terror yet to notch for the Club almost found the net. Jeando Fuchs collected the ball 30 yards from goal and struck a dipping effort towards the left-corner which forced Maynard-Brewer to tip round the post.

Blair Spittal also tried his luck from distance for the visitors, his well struck shot curling narrowly wide of the post.

In the second half, the tide changed slightly as County began to look for an equaliser. Despite this, United almost doubled their advantage on the 53rd minute, as Fuchs’s teasing delivery skimmed off the head of the unmarked Clark in the Staggies’ box and drifted just past the upright.

County hit back though, and almost levelled five minutes later through their main source of danger, Hungbo. The Englishman burst his way into the United area and struck the ball off the post from an acute angle to give the hosts’ defence a wake-up call.

Hungbo went close again after manhandling by Jordan White on Ryan Edwards went unpunished by referee Don Robertson, and the ball fell perfectly for the winger to strike, but his effort skidded beyond the target via a deflection off a tangerine shirt. Siegrist found himself cautioned immediately after the ball went out of play for his protestations at the decision not to penalise White’s physical battle with Edwards. From the resulting corner, Harry Clarke met Spittal’s delivery on the full, and despite finding himself in splendid isolation, diverted the ball into the Eddie Thompson from point-blank range, another let-off for United.

Neat interplay from Pawlett and substitute Louis Appéré gave the latter space to strike, Academy Graduate whipping his shot around the far post.

County thought their efforts had finally paid off as we entered the final ten minutes, Dominic Samuel stroking the ball into the top corner past a helpless Siegrist following an untidy touch from White. However, the linesman’s raised flag ensured United’s lead remained intact.

Cinch Premiership Player of the Month for September Harkes was the final man in tangerine to test the away side’s keeper, spinning away from Burroughs and slashing his shot straight into the arms of Maynard-Brewer.

Don Robertson’s whistle sounded after five minutes of additional time to conclude a physical 90 minutes on Tayside, United recording another 1-0 victory which keeps them in 5th place in the cinch Premiership heading into the second international break of the 2021/22 season.