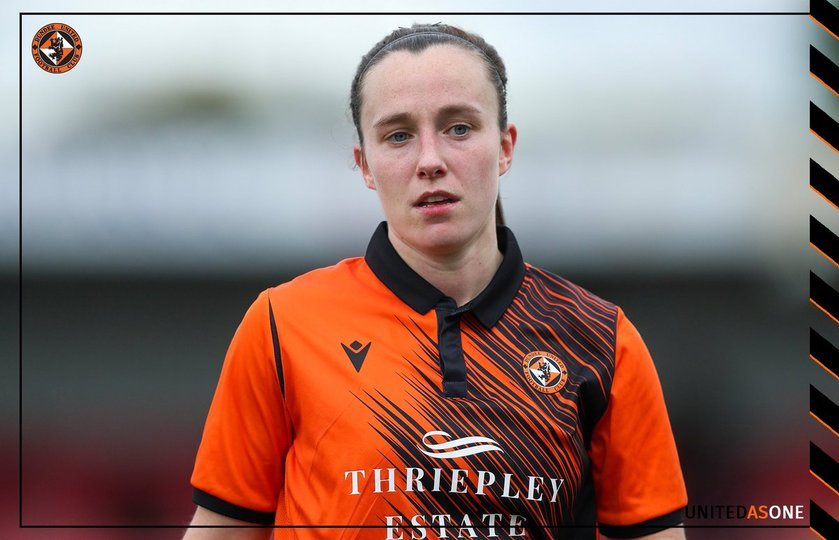 After leading at half-time through Jade McLaren and Rebecca Foote, Robyn Smith increased the lead with McLaren completing a hat trick; Rebecca Robertson grabbing a late consolation for the hosts.

Graeme Hart made two changes from last week as Rachel Todd and Erin Ross were replaced by Megan Burns and Steffi Simson. There was also a place on the bench for U17 duo and twins Zoe and Katie Maclean.

It was a stuffy affair in the opening stages of the first half as United were restricted to Cassie Cowper’s long-range effort flying over before Rebecca McMillan couldn’t find the target from Robyn Smith’s corner.

Jade McLaren somehow missed a golden opportunity from two yards out in the 26th minute but more than made up for it sixty seconds later when she lashed home five yards further out.

United increased the pressure following this and forced a great block by a Stirling defender as Danni McGinley saw her shot cleared off the line.

The lead was increased seven minutes before the break; Smith’s low cross was parried into the path of a grateful Rebecca Foote who tapped home for her first goal in tangerine.

After half-time, Foote and Neve Guthrie came close as Graeme Hart’s side looked to further extend the two-goal advantage.

McGinley was denied by Stirling keeper Mitchell in the 54th minute while Guthrie almost scored a fantastic goal as her long-range effort had the keeper scrambling to push the ball ever so slightly past the post.

Just after the hour mark, the third goal came and it was McLaren again when she rose highest to connect with a Smith corner and head home.

Smith and McGinley had further chances just after this, although the pair were both involved during the build-up to the fourth goal with eighteen minutes to go; the latter playing a low pass to the former to net at the back post.

United didn’t have to wait long for a fifth and it came five minutes later through a freak goal as Jade McLaren’s mishit cross flew over the head of Mitchell and into the net to complete her hat trick and make it eight goals for the season.

Stirling grabbed a late consolation shortly after when Rebecca Robertson beat the offside trap to slot past Lauren Perry.

Results elsewhere meant that United created a two-point gap at the top of the league but they are now out of action next week as the odd team out. The next fixture will be played on December 12th at home to Kilmarnock.