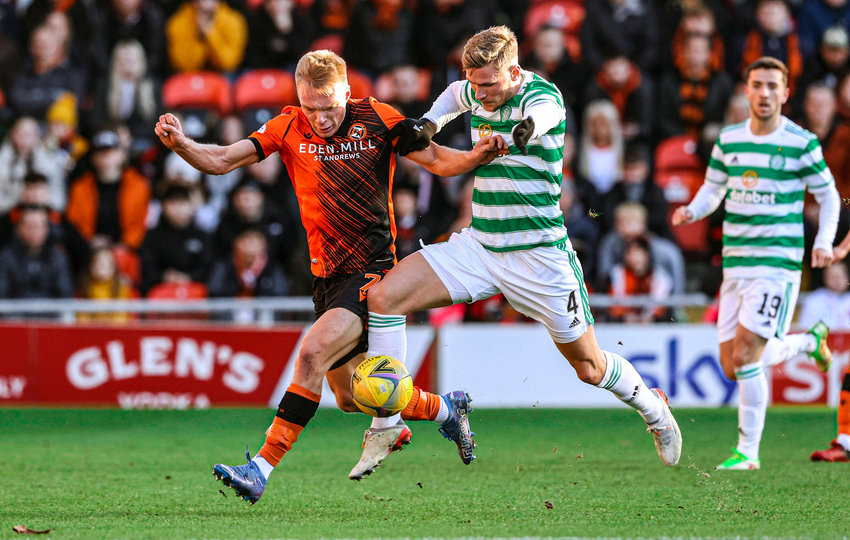 Following the loss in Lanarkshire on Tuesday, United had the chance to bounce back quickly as Ange Postecoglou's Celtic were welcomed to Tayside. The sides played out an entertaining draw at the end of September when Ian Harkes’ quick-fire equaliser earned United a point at Celtic Park, but the Hoops have enjoyed a resurgence of late with Livingston the only team they have dropped points to since.

Tam Courts made three changes to the side that were defeated against Motherwell on Tuesday, midfield engine Jeando Fuchs returning to the squad and starting 11 alongside Adrian Sporle and first-half substitute Nicky Clark with Scott McMann, Flo Hoti and Declan Glass dropping out of the side.

Celtic claimed the upper hand from the off, United’s first touch of the ball coming after two minutes when Ryan Edwards deflected Mikey Johnston’s strike wide for a corner.

United struggled to cope with Celtic’s off-the-ball movement, all three midfielders dropping into wide areas to create the trademark ‘Postecoglou square’ which allowed for rapid ball speed, the tangerine shirts chasing shadows with Celtic exploiting their numerical overloads in the channels. When the hosts did regain possession, it tended to be for seconds due to the lack of composure on the ball and aggressive Celtic press.

Kyogo Furuhashi had a glorious chance on the fifth minute to open the scoring after Greg Taylor glanced David Turnbull’s corner into the six-yard box, the Japanese somehow steering his headed effort over with the goal at his mercy.

Kyogo turned provider when he teed up Tom Rogic advancing towards the box who struck his shot into the Eddie Thompson upper-tier under pressure from Peter Pawlett.

Rogic was the dangerman for Celtic, terrorising the United defence with his driving runs and, on the 19th minute, he gave his side the lead. The Australian international picked up the ball in the right half-space and danced beyond the half-hearted challenges of four United players before bending the ball into the far corner, a deserved lead for the visitors.

United were almost gifted an equaliser as Hart’s attempted pass to Carter-Vickers rolled too close to his own goal-line for comfort, Apperé picking up the ball on the left of the area but was crowded out by recovering Celtic defenders.

Johnston had another dig from a similar position to his first, coming in off the left to strike right-footed after neat combination play with Greg Taylor, then Benji Siegrist managed to paw Cameron Carter-Vickers’ unorthodox effort off the line following a corner.

Turnbull was the centre of attention during a seven-minute spell where he headed Taylor’s cross wide, then proceeded to extraordinarily fail to force Kyogo’s cut-back over the line from point-blank range. However, the midfielder made up for this soon after, clipping Callum McGreogor’s pass over Siegrist and messily bundling the loose ball into the net to double the green and white advantage.

The second half failed to produce as many opportunities as the first, but Celtic remained in control of the match, stroking the ball around the box, the tenacious Fuchs managed to disrupt the visitor’s build-up play with an outrageous amount of interceptions though.

Siegrist had to remain alert with Kyogo lurking in the area, the poacher meeting Juranovic’s cross and forcing an impressive save out of the United stopper.

United began to grow into the game with around 20 minutes to play, Celtic’s defence beginning to lose concentration and inadvertently gift United possession on multiple occasions. Ilmari Niskanen plucked Siegrist’s cross-field pass out of the sky brilliantly and drove towards the heart of the rear-guard, eventually laying the ball off to Pawlett who struck the ball straight down the throat of Joe Hart, his first involvement of the afternoon.

Niskanen once again proved a threat, picking out Clark on the penalty spot who opted to attempt to lay the ball off to Ian Harkes rather than go for goal himself, the 30-year-old perhaps surprised the cross made it all the way to his feet and catching him off guard.

Soon after, Sporle had a shot on the overlap to spark the Arabs into life as they began to believe United could get back into the match.

Celtic hit back, Siegrist with a double save after McGregor clipped an inch-perfect ball over the top to Kyogo who first went for the dink and then for power, both times denied.

Kyogo and Substitute Nir Bitton both fired over the bar from close and long range respectively, then Scales added a third with nine to play, sidefooting into the bottom left corner from the D as he broke forward from defence to connect with fellow sub Abada’s cut-back following a raking switch ball from Bitton.

Abada could’ve bagged one for himself when Celtic had a four-on-one scenario in stoppage time but dinked wide of the post with what was practically the last kick of the ball.

A justified three points for Postecoglou’s team who dominated from start to finish, United having an off day on a frosty Sunday afternoon as they remain in fourth place albeit on goal difference.