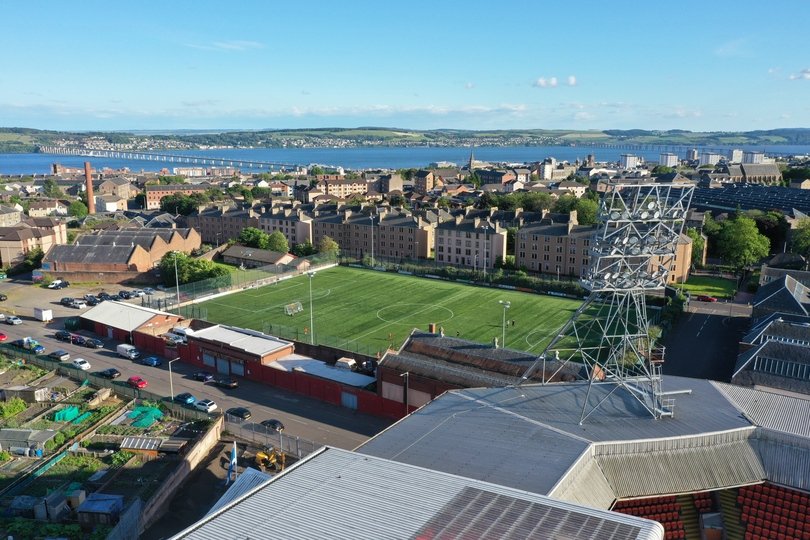 Work has begun on the first phase of an exciting redevelopment project at Gussie Park as we commit to ensuring the long-term 'home' of Our Academy remains under the protective and inspirational shadow of Tannadice Park.

The £300,000+ Academy campus project, in partnership with, and part-funded by Dundee United Supporters Foundation, will see the synthetic playing surface renewed to FIFA Quality Pro standard, new fencing installed around the pitch and the installation of new coach and spectator areas.

This initial phase, expected to be completed early in 2022, will see over £300,000 committed to the project, with DUSF members contributing £100,000 of the amount. This injection of money, handed over by DUSF in June 2020 to assist the Club's cashflow during the pandemic, will be cemented into the project and sees the DUSF Steering Committee and the Club uphold its promise to the DUSF members that the money would be invested into an Academy building project.

Further stages of work pursuing the ultimate goal of providing our young players with state of the art facilities will follow on and will be announced in due course.

Academy Director Andy Goldie said, "The last three years have been focussed on building an infrastructure and culture, that now provides our young players with the level of service, experience and opportunity required to match their ambitions. The redevelopment of Gussie Park will now provide them with an environment where they can call home and maximise their potential.

In the shadow of Tannadice, the location of Gussie Park not only inspires our young players but helps us celebrate the history of Dundee United, with the next generation looking to emulate the success of the legends and graduates who learned their trade on the same pitch.

The initial work, on and around the pitch, will be completed early 2022 with further redevelopment to follow. By the end of the project, our young players will benefit from state of the art facilities such as analysis and education suites, a physical performance suite, office space, changing rooms and more.

We are extremely grateful for the unwavering support of Dundee United Supporters’ Foundation members, the Chairman and the board, particularly throughout this Covid-era, in continuing to back this project and we look forward to seeing the future of our club thriving in a facility we can all be proud of."

Ged Bell of DUSF said “We are very pleased that the Club have committed to their promise to invest our members’ contributions in this way as it fulfils the criteria that was voted for. It is great news that the Club have decided to develop Gussie Park as it cements our home at Tannadice for the foreseeable future.”

Martin Manzi of DUSF added, “The Foundation's policy on funding is that it will go into a bricks and mortar building project that will be a tangible part of our football club forever. State-of-the-art academy facilities attracts young players and their parents, and our hope is that this strong commitment to Our Academy will continue for years to come.”

Interested parties can join the DUSF and help shape the future of the Club’s Academy by signing up here.

Gussie Park has been at the forefront of Youth Development at Dundee United since the 1980's and is synonymous with Dundee United's long-term success at producing graduates.

The Dundee United Supporters’ Foundation, has grown to over 1,950 members since it was launched in June 2017 and has raised over £230,000 for the Club, charities and fans’ projects in that time.